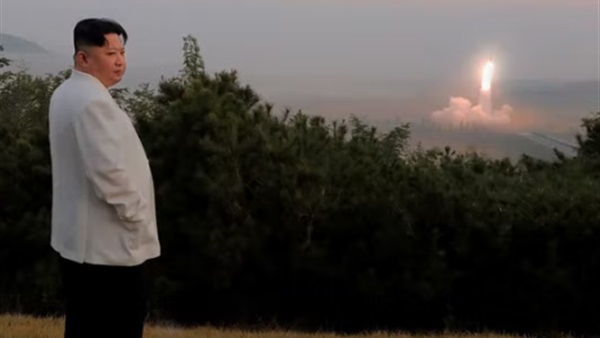 North Korea fired a short-range ballistic missile, shot a barrage of artillery towards South Korea and flew warplanes close to its neighbour’s border in its latest show of force – all in the span of a day.

North Korea’s latest military actions were in response to South Korea’s “provocative” 10-hour-long artillery exercise near the border, it said in a statement through its state-run Korean Central News Agency.

The actions will likely further heighten tensions with its regional neighbours and the US.

Pyongyang issued “a stern warning to the South Korean military inciting military tension in the frontline area with reckless action” and defended its actions, saying it “took strong military countermeasures”.

South Korea said it detected a short-range missile taking off from the Sunan area of North Korea’s capital at 1.49am local time on Friday, flying towards its eastern waters.

The ballistic missile travelled 650-700km (403-434 miles) at a maximum altitude of 5km (30 miles) before landing in waters between the Korean Peninsula and Japan, according to South Korean and Japanese assessments.

Following the missile test, North Korea fired 130 rounds of shells off its west coast and 40 rounds off its east coast, violating a maritime “buffer zone” agreed to in a 2018 inter-Korean agreement, South Korea’s Joint Chiefs of Staff said.

South Korea also scrambled fighter jets after the North flew warplanes close to the border for the first time since 2017. Around 10 North Korean fighter jets crossed a “reconnaissance line” set by Seoul, prompting South Korea’s military to undertake the automatic operational response required in the situation.

North Korea has intensified tensions in the Korean peninsula as Kim Jong-un ordered a torrid run of powerful weapons tests while threatening pre-emptive nuclear strikes on Washington and Seoul.

It was Pyongyang’s 15th missile launch since 25 September when it resumed its testing activities. It was also the second time the North launched a ballistic missile at night in less than a week and follows tests of two long-range cruise missiles on Wednesday.

These were Seoul’s first unilateral sanctions on North Korea in five years, but they are seen as largely a symbolic step by observers as the two Koreas have little financial dealings.

The tension flaring up in the Korean peninsula has come amid a key ruling Communist Party congress in neighbouring China that will begin on 16 October for Xi Jinping’s third consecutive term. Some analysts believe the North, a Chinese ally, will halt tests during this period.

China’s foreign ministry spokesperson Mao Ning has urged all parties to refrain from escalating tensions and resume meaningful dialogue for a political solution.

South Korean president Yoon Suk Yeol, who promised a tougher stance over North’s provocations, said Mr Kim’s incitement is becoming “indiscriminative” but that his country has massive retaliation capabilities that can deter actual North Korean assaults to some extent.

“The decision to attack can’t be made without a willingness to risk a brutal outcome,” Mr Yoon told reporters.

“The massive punishment and retaliation strategy, which is the final step of our three-axis strategy, would be a considerable psychological and social deterrence (for the North).

Condemning what it called as a barrage of “hostile actions” overnight, Seoul’s National Security Council warned that “such provocations will bring consequences”.

The North said the action was in response to South Korea’s artillery fire for about 10 hours near the border on Thursday. South Korean leadership later confirmed conducting the artillery training at a frontline area but said it did not violate the 2018 agreement.

On Wednesday, Mr Kim said these recent missile tests were a “simulation” of a nuclear attack on the South. He expressed “great satisfaction” with the launches and said it shows its nuclear combat forces were at “full preparedness for actual war”.