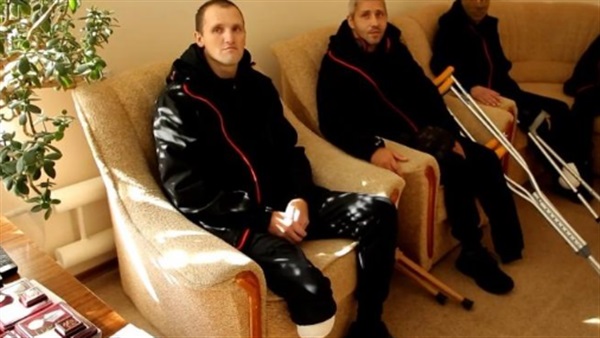 A Russian convict who was serving a long prison sentence for killing a magistrate during a robbery has been “pardoned” after losing a leg while fighting in Ukraine, according to pro-Kremlin media.

Stanislav Bogdanov was among thousands of inmates recruited for Russia’s invasion of Ukraine by the Wagner Group, a notorious paramilitary organisation that is run by Yevgeny Prigozhin, a Kremlin-linked tycoon. Inmates have been offered their freedom in return for a six-month tour of duty in Ukraine.

Bogdanov, 35, was sentenced to 23 years in prison in 2012 after he used an iron poker and dumbbells to beat to death Sergei Zhiganov, a magistrate in Veliky Novgorod, a city in northern Russia. He had 13 years left to serve.

In a video published by Prigozhin’s Ria Fan media outlet, Bogdanov and three other former convicts were handed military awards and pardons by an unseen official. All the men had lost limbs during the war. Bogdanov’s right leg was severed from the knee down.

“You have earned this pardon with your blood and sweat and your heroism,” the official told them. The video was filmed in Luhansk, a city in eastern Ukraine controlled by Kremlin-backed separatists.

Bogdanov said he had taken up Wagner’s offer of freedom in return for military service because “you only get one offer like this in your life”. Wagner is said to have been especially keen to recruit convicts serving sentences for violent crimes.

Olga Romanova, a Russian prisoners’ right activist, said that while she was certain the men had been released, there were no legal grounds for the pardons. “There is no law about this,” she said. “This seems to just be some dodgy certificate that someone has stamped.”

In August, a convicted murderer who was serving a 25-year sentence before he was freed and deployed to Ukraine was posthumously awarded Russia’s medal of honour by President Putin. Ivan Neparatov, the head of a criminal gang near Moscow, was found guilty of killing five people in 2013. He was praised by the Kremlin for his “courage and heroism” after being killed in action.

Prigozhin, 61, is known as “Putin’s chef” because his company provides catering services to the Kremlin, including a lucrative contract for school dinners in Moscow. He recently replied to criticism of the use of inmates to fight in Ukraine by telling Russians: “It’s either prisoners or your children — decide for yourself.”

The convicts are being used to plug holes in the Russian army, which has been forced into humiliating retreats in recent weeks. Around 90,000 Russian soldiers have been killed, seriously injured, or have gone missing since the start of the war, according to state security sources cited by iStories, a Russian investigative journalism website.