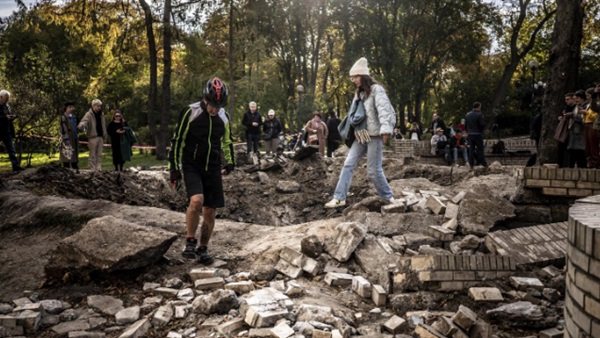 Ukraine’s capital region has been struck by “kamikaze” drones as residents woke to air raid sirens for the fourth day in a row and Russian missiles hit more than 40 towns and cities across the country.

Oleksiy Kuleba, the Kyiv regional governor, said the attack involving Iranian-made explosive drones occurred in a village near the capital, and hit infrastructure. In the city of Mykolaiv, overnight shelling destroyed a five-storey apartment building as fighting continued along Ukraine’s southern front.

In the frontline town of Avdiivka in the eastern Donetsk region, a Russian strike on a crowded market killed at least seven people and injured eight yesterday, a regional official said. It was not immediately clear whether there were any casualties from the latest strikes, which came a day after Nato defence ministers committed more military aid to Kyiv.

Early morning attacks on the southern front have become a daily occurrence following an explosion on the bridge linking Crimea and Russia, which President Putin blamed on Ukraine’s security services.

On Monday, dozens of retaliatory Russian missiles hit cities and infrastructure across the country, killing at least 19 people and wounding more than 100. Further casualties were reported from strikes on Tuesday and yesterday.

Ukrainian forces continue to push their counteroffensive to recapture territory occupied by Russia. Air defences have shot down dozens of incoming Russian missiles and Iranian-made Shahed-136 drones, the so-called kamikaze drones that have increasingly been replacing Russia’s expensive cruise missiles.

An official in the Russian city of Belgorod, near Ukraine, said today that it was hit by shelling by Kyiv’s forces, and a residential building was damaged. Russia’s defence ministry claimed to have shot down two Ukrainian fighter aircraft inside Ukraine.

Britain announced overnight it would supply air-to-air missiles to help Ukraine defend itself against cruise missiles. The Ministry of Defence said the Amraam weapons would help to protect critical national infrastructure, after Kremlin strikes caused blackouts and water shortages.

Britain said it would also send hundreds of drones to support Ukraine’s intelligence services, and 18 howitzer artillery guns, in addition to 64 already delivered.

Jens Stoltenberg, Nato’s secretary-general, said yesterday that the past two weeks had brought “the most serious escalation” in the conflict since the invasion began in February.

President Zelensky, who has described the Russian missile attacks as an act of terrorism, has pressed the West for an “air shield”.

“The more audacious and cruel Russian terror becomes, the more obvious it is to the world that helping Ukraine to protect the sky is one of the most important humanitarian tasks for Europe today,” the Ukrainian leader said in his daily video address to his nation.

Putin is holding talks with President Erdogan of Turkey at a summit in Kazakhstan today. Turkey has tried to mediate between Moscow and Kyiv, but neither side has been willing to accept the other’s demands for a ceasefire.

At the talks, Putin proposed to Erdogan to create a gas hub in Turkey. Russia has been directing supplies away from the Nord Stream pipelines under the Baltic while maintaining leverage over supplies to Europe.

“Turkey turned out to be the most reliable route today for the supply of gas to Europe,” Putin told Erdogan. The TurkStream natural gas pipeline connects Russia’s Krasnodar region to Turkey.

The resolution was supported by 143 countries, while 35 — including China and India — abstained. Four countries supported Russia in rejecting the vote — Belarus, North Korea, Syria and Nicaragua.

The admission of Ukraine to Nato could lead to a third world war, Alexander Venediktov, deputy secretary of the security council of the Russian Federation, told the state Tass news agency in an interview this morning.

“Kyiv is well aware that such a step would mean a guaranteed escalation to a World War Three,” he said. “Apparently, that’s what they are counting on — to create informational noise and draw attention to themselves once again.”

Venediktov reiterated the Russian notion that by helping Ukraine, the West is “a direct party to the conflict”.