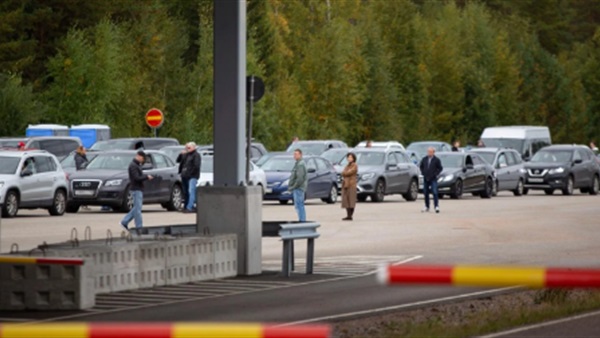 Some 7,000 people entered Finland from Russia on Thursday, a more than 100 per cent increase on the same day the week before, the latest figures from officials in Helsinki have revealed.

The exodus comes in the days after Vladimir Putin announced mobilisation of reservists for the war in Ukraine, with some reports that up to one million people will be called up.

Amid grim scenes of farewell across Russia, traffic at Vaalimaa, the busiest crossing point between the two countries was busy on Fridau, with cars lined up for up to 400 metres, a longer queue than the day before, a border official said.

Max, a 21-year-old Russian student who declined to give his last name, said he was going to Finland to catch a flight to Germany to visit relatives.

“Technically, I’m a student so I should not be afraid of being drafted but we have seen that things are changing very quickly so I assume there is a chance,” he told Reuters. “I just wanted to be safe.”

A Russian couple, 29-year-old Slava and 35-year-old Evgeniy, also left because of the uncertainty of being called up in the military at some point.

They had decided to leave the moment Putin announced the partial mobilisation on Wednesday, they said. They had left their dog Moby behind with friends. Their families cried when they left, they said.

“At the current stage, we are not in demand, but we do not know what is going to happen tomorrow,” Slava told Reuters. “We don’t support what is happening now. We don’t want to be a part of it.

“It was a difficult decision . We have plans, we have careers. The best scenario is to go back. On the other hand, (saving our) life is essential.”

Finland opted to keep its border with Russia open following the invasion of Ukraine although it has cut back the number of consular appointments available to Russian travellers seeking visas.

It is nowconsidering barring most Russians from entering.

Elsewhere, Russian left the country to other countries where they could easily travel.

"I don’t want to go to war. I don’t want to die in this senseless war. This is a fratricidal war,” Dmitri, who flew to Armenia with just one bag and left his family of wife and children behind, told AFP.

Another man, Sergei, who reached Armenia with his teenage son said that he and his family “choose not to wait to be called up” by the Russian authorities looking to pour in more men into its war against Ukraine.

“I am not panicking but I feel this uncertainty,” his 17-year-old son Nikolai said

Social media videos showed families saying goodbye to men outside military mobilisation centres. Many were seen crying and covering their faces with hands in grief.

A 25-year-old student, Dmitry, was shocked on learning that he is one of the military reserves Russia called for this week as he was still studying.

“No one told me anything in the morning. They gave me the draft notice that I should come here at 3 pm. We waited 1.5 hours, then the enlistment officer came and said that we are leaving now,” he said.

He was told by his father who hugged him goodbye to “be careful”.

Social media platforms are advising Russians on how to exit the country. A list of “where to run away right now from Russia” was also published by a Russian news site.