How likely is it that Russia will launch a nuclear attack? 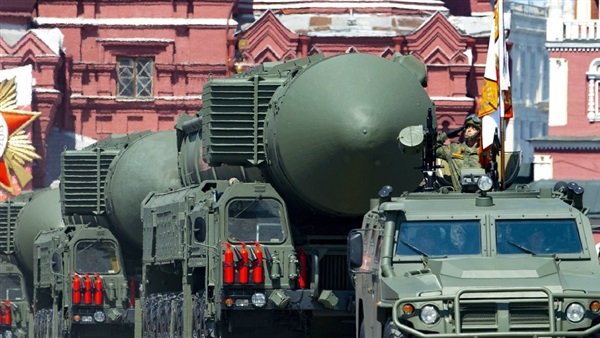 Two civilians were killed and seven wounded in shelling by Moscow forces on Tuesday in the Donbas, which has become a key area of focus for what the Kremlin still insists is a “special operation”.

At the start of the war in February, Mr Putin and his military officials were said to have been planning for an offensive which they believed would last only a few weeks. But with September just over two weeks away, his troops have made little gains outside of the south and east, failing to take major cities such as Ukraine’s capital Kyiv.

Russian soldiers have also met with stiff resistance in the Donbas region, leading to fears that a frustrated Mr Putin could unleash a nuclear attack.

During the first weekend of the war, he placed the country’s strategic nuclear weapons forces on high alert. Mr Putin issued another warning in March, responding to what he described as “aggressive statement” by Nato.

But is it likely that Russia would ever launch a nuclear strike on its neighbour and adversaries further west?

What has Vladimir Putin said regarding nuclear weapons?

During a meeting on Sunday 27 February, Russian television footage showed Mr Putin meeting with his defence minister and the chief of the general staff and instructing them to put the nuclear weapons on a “special regime of combat duty”.

Outlining what this means, Patricia Lewis, director of the international security programme at the think-tank Chatham House, said: “What we think has happened is that under peacetime, Russia has checks and balances in place so that they can’t launch nuclear weapons.

“So in order to be able to launch nuclear weapons, president Putin has to change the status from peacetime to combat, hence the phrase he’s ‘put his forces on special mode of combat duty’. I think we would probably call it combat readiness but it’s hard because of different languages and different meanings.”

“What he seems to have done is created the legal platform to be able to launch if he wishes,” she added.

Professor Malcolm Chalmers, deputy director general of the Royal United Services Institute (RUSI), said that wording had not been used before, so it is not “entirely clear” what was meant.

“I haven’t seen any reporting of changes in Russian nuclear forces postures,” he said. “Obviously I don’t have access to classified intelligence but I haven’t seen reports as such.

“So it’s not clear how that changes. It may be something to do with the particular authorisation mechanisms between the president and the nuclear forces or it may be nothing at all. What is clear is that this is designed to be something that we need to listen to. It’s designed to be a reminder that Russia is a nuclear weapons power.”

How likely is a nuclear attack?

Earlier this year, UK defence secretary Ben Wallace attempted to pour cold water on fears of a nuclear war, stating that while he understood the concerns, the phrasing is a “battle of rhetoric”.

During media interviews, he told Sky News he “was not going to speculate” on what Mr Putin might do in the future.

Later on, he told BBC Breakfast: “We don’t see or recognise in the sort of phrase or the status he described as anything that is a change to what they have currently as their nuclear posture.

“This is predominantly about Putin putting it on the table just to remind people, remind the world, that he has a deterrent.

“But at the moment this is a battle of rhetoric that President Putin is deploying, and we just have to make sure we manage it properly.”

Tom Tugendhat, chairman of the foreign affairs committee, meanwhile, stated that Russia sees battlefield nuclear weapons as simply “a bigger bang” and could give a military order to use them.

Some experts stated that it is unclear whether or not Mr Putin would go ahead with a nuclear attack, while others quashed the possibility, stating that the mutual destruction would be too great.

Ms Lewis previously said: “Now he’s moved to a situation of combat, he can [launch a nuclear attack]. But will he? We don’t know. This is the problem.

She added: “There is a possibility to retaliate against conventional force with nuclear weapons under Western doctrines, but it is generally believed that would be a last resort.

“I think there’s been a sense over the last decade that Putin, along with [North Korean leader] Kim Jong-un and [former US president] Donald Trump, are people who could have just launched a nuclear weapon. So there’s always been this unpredictability… I don’t want to overplay it but I don’t want to downplay it either.”

Professor Chalmers meanwhile said that he thought it was “unlikely”, adding: “Because any use of nuclear weapons would open up such a Pandora’s box, and the possibility of escalation to the use of more nuclear weapons once one country has used them, the pressure on other nuclear weapon states to use them in response would be very considerable… the Russians understand that and so do the west. So it’s a paradox.”

Responding to media speculation in August that the Kremlin might resort to nuclear weapons, Sergei Shoigu, Russia’s defence minister, described the claims as “absolute lie”.

“From a military point of view, there is no need to use nuclear weapons in Ukraine to achieve the set goals. The main purpose of Russian nuclear weapons is to deter a nuclear attack,” he claimed.

"The media are spreading speculation about the alleged use of Russian tactical nuclear weapons in the course of the special military operation, or about the readiness to use chemical weapons. All these informational attacks are absolute lies."

He also alleged Ukrainian military operations were being planned by the United States and Britain, and that NATO had increased its troop deployment in eastern and central Europe "several times over".

Referring to the New START Treaty to control US and Russian nuclear arms, Shoigu said talks to extend the treaty were "a two-way street", and the situation around it was "difficult".

"A difficult situation is also developing with regard to the Treaty on the Limitation of Strategic Offensive Arms. The agreement remains in force until 2026," Shoigu added.

"On the Russian side, obligations are being fulfilled, the declared levels of carriers and warheads are maintained within the established limits."

What could happen in a nuclear attack?

If Russia launched an attack on a Nato country, experts have said there could be retaliatory strikes from other alliance nations, prompting a conflict that Professor Chalmers said would lead to “orders of magnitude worse than the Second World War”.

Numbers of casualties would depend on what area was attacked. Nuclear weapons have the capability to kill hundreds of thousands of people depending on how populated an area is that is targeted.

Others could be left injured as a result of radiation poisoning if a specific facility is targeted instead.

What nuclear weapons does Russia have?

The Bulletin of Atomic Scientists, which has published an account of world nuclear arsenals compiled by leading experts from the Federation of American Scientists since 1987, updated its records on Russia’s nuclear arsenal in February.

What about the rest of the world?

According to the Federation of American Scientists, figures from earlier this year state that the UK has a stockpile of approximately 225 nuclear warheads, while the US has 5,428, France has 290, Pakistan has 165, China has 350, India has 160, Israel has 90 and North Korea has 20.