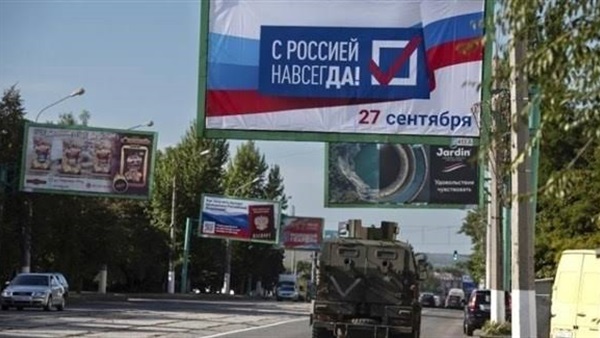 Voting has begun in areas of Russian-occupied Ukraine in a referendum that could see four regions annexed by President Putin.

Polling in Luhansk, Donetsk, Kherson and Zaporizhzhya provinces, representing about 15 per cent of Ukrainian territory, is due to run from today until Tuesday.

By incorporating the areas, the Kremlin could argue that any attempt to retake them by western-backed Ukraine was an act of aggression against Russia itself, justifying military escalation.

Putin said on Wednesday that Russia would “use all the means at our disposal” to protect itself if it came under attack, in a promise that seemed to endorse the use of its nuclear arsenal. “This is not a bluff,” he said.

Dmitry Medvedev, Russia’s former president and deputy head of its security council, emphasised the stance in a social media post. “Encroachment onto Russian territory is a crime which allows you to use all the forces of self-defence,” he said.

On Friday it emerged that for months the United States has been sending private communications to Moscow over its veiled nuclear threats. Using a back channel, Washington has warned of the grave consequences that would follow the deployment of a nuclear weapon, The Washington Post reported.

The vote comes days after Putin announced a “partial” mobilisation that could add 300,000 troops to Russia’s invasion force.

The draft is supposed to apply to reservists and men who have studied at military institutes, but the wording of legislation is vague and there have been widespread reports of Russians outside those categories receiving an order to report immediately for service.

Putin launched the invasion of Ukraine in February, calling it a “special military operation” and claiming the aim was to “de-Nazify” the country and save people in pro-Russian separatist areas from Ukrainian aggression.

Initial advances which brought Russian troops close to the capital, Kyiv, were later reversed and a recent counter-offensive by Ukrainian forces took back large swathes of territory in the south and east of the country.

The referendums, in which residents are asked if they want their regions to join Russia, have been roundly condemned in the West. They are being conducted under military occupation with no independent observers present and are almost certain to endorse annexation.

Kyiv has warned that participating in the referendums will be considered a criminal offence by the Ukrainian authorities.

Zaporizhzhya and Donetsk regions are not fully controlled by Russian forces. Serhiy Gaidai, the Ukrainian governor of the Luhansk region, said residents in the Russian-held town of Bilovodsk had been threatened, with their names being reported to to the security services if they did not vote.