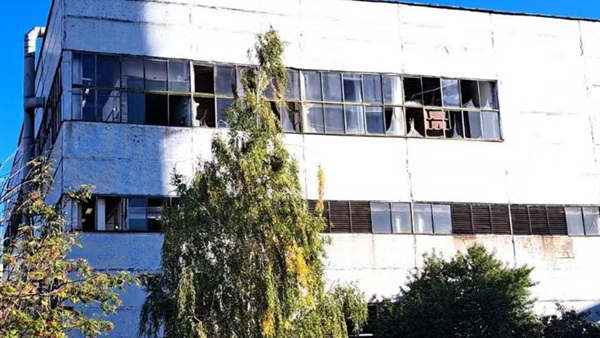 “Today at 00.20am, the Russian army carried out a missile attack on the industrial site of the south Ukraine nuclear power plant [SUNPP],” it confirmed.

“A powerful explosion occurred just 300m from the SUNPP reactors. The shock wave damaged the NPP buildings as well as over 100 windows were broken,” the state agency said in a statement.

Visuals of the missile strike showed a large crater erupting on the horizon. One of the two photos showed a man standing in front of the crater giving a sense of the scale of the blast.

Volodymyr Zelensky also denounced the Russian attack on the Telegram app and said: “The invaders wanted to shoot again, but they forgot what a nuclear power plant is. Russia endangers the whole world. We have to stop it before it’s too late.”

The missile attack also knocked out one of the hydropower units of the Oleksandrivska HPP, causing it to shut down along with three high-voltage power transmission lines. The hydroelectric power plant is a part of the South Ukrainian power complex.

Officials said all three SUNPP power units are operating in a normal mode at present.

No injuries and casualties have been reported among the power plant staff, Energoatom said in the statement.

The Kremlin has not reacted to the reports accusing Russian forces of firing missiles on the nuclear plant.

Southern city Mykolaiv, just 435kms (270 miles) away from the Black Sea, has been bombed ferociously and struck with missiles in the recent weeks by the Russian forces.

Moscow has amped up the military warfare in Ukraine with increased missile strikes in sensitive zones where nuclear facilities are situated in the last 24 hours. This has caused the top US military officials to warn the forces in Europe to be on a heightened alert fearing a strong response from Russia.

“The war is not going too well for Russia right now. So it’s incumbent upon all of us to maintain high states of readiness, alert,” US general Mark Milley, who also serves as the chairman of the joint chiefs of staff, said on Sunday.

It is not immediately clear if the missile strikes caused any casualties.