Will Putin use nuclear weapons? These are his options 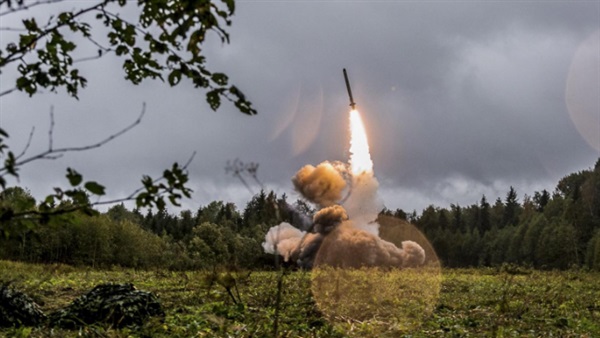 To some observers, the choices facing President Putin are bleak. Following Ukraine’s counteroffensive across the northeast of the country, the Russian leader can either accept a humiliating defeat or double down in the pursuit of military victory. With limited reserve units to draw upon, some analysts and former military chiefs believe that he could even go nuclear in response to setbacks on the battlefield.

Franz-Stefan Gady, a research fellow at the International Institute for Strategic Studies (IISS), said that the more that Ukraine’s army succeeds, the higher the risk that Putin will order the detonation of a tactical nuclear weapon.

These weapons are of a lower yield than “strategic” nuclear weapons of the sort carried by Russia’s submarines. They are typically intended to devastate enemy targets in a specific area without causing widespread destruction. Depending on the yield, a tactical nuclear weapon could easily destroy a football stadium, whereas a strategic missile launched from a submarine, land-based missile silos or mobile launchers could take out a city.

Should Putin wish to escalate the war to nuclear level, his generals will present him with a number of options ranging in severity.

Even with his presidential powers, however, Putin cannot order a nuclear attack on his own. It is believed that there are three nuclear briefcases in total, forming a “triple lock system” that takes about 20 minutes to carry out. Putin has one of them, although it contains a system of codes rather than a nuclear key. The code is sent to Russia’s defence minister and then both of their codes are sent to the chief of the general staff, at present General Valery Gerasimov. It is believed that when Gerasimov has all three sets of codes, he can execute orders.

Of the least worst options, Gady said that Russia could decide to detonate a tactical nuclear weapon over the Black Sea “to stop Ukraine’s momentum”. He said that this would be seen as a “demonstration that Russia would be willing to use nukes”.

Such a move would also alarm the Nato alliance, although it is uncertain what its response would be. Putin may decide that it is a risk worth taking to save face. A low-yield tactical nuclear weapon could also be used to hit a target on land, possibly a military installation. It would still have the same effects as Hiroshima — such as deadly radiation that would cause long-term health damage to survivors — but on a much smaller scale.

Although Gady said that he judged the risk to still be “quite low”, he said that “Russia has enough remaining conventional long-range strike capabilities to devastate cities such as Kharkiv and Kyiv” if it wanted to. An attack on that scale would force a response from Nato.

An alternative way of punishing the Ukrainians could be to “weaponise” Ukraine’s Zaporizhzhya nuclear power plant or other critical infrastructure, according to Hamish de Bretton-Gordon, an expert in chemical warfare.

He said that by blowing up the power plant with a conventional missile strike, the outcome would be “six times worse than Chernobyl”. “Soviet doctrine allows commanders to use tactical nukes to prevent defeat, which is looking increasingly likely,” he said.

He believes Putin is convinced that even if were to use a tactical nuclear weapon Nato would not retaliate with its own nuclear force.

For Putin to deploy nuclear weapons under Russian doctrine he must believe — or claim to believe — that there is a threat to the existence of the Russian state. Pavel Podvig, one of the world’s leading experts on Russian nuclear forces, said that Russian officials had repeatedly emphasised that they would strictly follow the doctrine. A decision by the Kremlin on whether to deploy them would be influenced by how the broader international community perceives the possibility of the use of nuclear weapons, he said.

“If it is commonly accepted that any use of nuclear weapons is unacceptable, then it would be difficult for the Kremlin to justify it. Especially as it wouldn’t change the military situation,” he added.