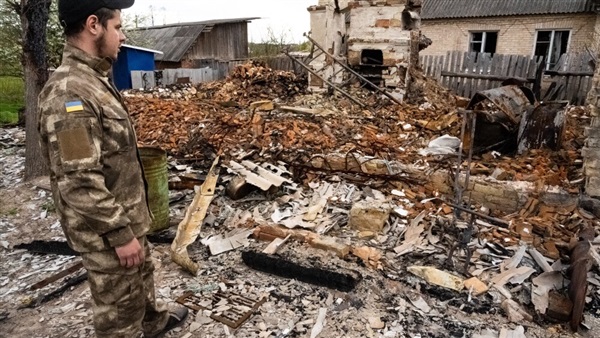 The first rains of autumn have fallen in Ukraine and the tank tracks heading east towards the Russian border were fresh in the roadside mud.

This is a traditional European war and the Ukrainian armour had punched through the forests and villages, driving the Russians into retreat.

“We didn’t know where the Russians were running to,” Nadia Olshanska, 59, said yesterday as she stood by a vehicle that the invaders had left behind. It was marked with the familiar white Z of the “military operation” that was supposed to “denazify” people like her.

Her cottage was on the other side of the road and it was down this lane that six months of occupation had ended two days earlier with a sudden eruption of violence. Olshanska had just managed to get a telephone line to her children, who had not known whether she was dead or alive for months, when the shelling started up.

“There were explosions everywhere. Houses were on fire,” she said. “That’s when I saw the Russians retreating.” Then her neighbour, Ludmyla Skirta, 75, spotted the blue-and-yellow markings on the uniforms of the men who were giving chase. “I was so excited I couldn’t stop shaking,” she said.

“It was like a dream,” Olshanska added. “When they said ‘hello’ in Ukrainian I actually had to pinch myself.”

Bairak is a village of two halves lying in adjoining valleys overlooked by the industrial town of Balakliya. This was the original, modest target of a Ukrainian advance that began last week, an attempt to take ground and push towards a Russian supply line farther on.

The Ukrainian general staff had set a trap and the Russians had fallen into it: convinced of the seriousness of a long-signalled counter-offensive on the city of Kherson, far to the southwest, they had weakened one line to reinforce the other. They have paid the price.

It is easy to see why Balakliya was a strategic target. It stands on a hill with views in all directions, over the woods to the south and the plain to the north. It contains one of the largest cement factories in Ukraine. At first the fighting was fierce but on Friday the lines around Balakliya broke and by Saturday the Russians were in full retreat, abandoning Balakliya and the cities of Kupiansk and Izyum.

Lieutenant-General Igor Konashenkov, the Russian army spokesman, was forced to make a humiliating public announcement that troops were being withdrawn to “further the aims of the operation to liberate Donbas”.

Videos posted online of the armour and weapons left behind in the panic, however, disavowed any idea of an orderly redeployment and the Ukrainians were not finished. They pushed on into Luhansk and Donetsk.

The Russians spent 101 days taking Severodonetsk, the largest city in Luhansk still in Ukrainian hands at the outset of the war. It took five days for the Ukrainian army to push back to its outskirts, where fighting was continuing last night.

To the north of Kharkiv the Russians fled the last remaining villages under their control yesterday afternoon.

Kharkiv sits barely 20 miles from the Russian border. Belgorod, which lies on the Russian side, was said to be teeming with troops who had fled the fighting.

Ukraine has recaptured territory at least twice the size of Greater London since Wednesday, the UK’s ministry of Defence said.

In the south, near Kherson, the MoD said Russia was “struggling to bring sufficient reserves forward across the Dnipro river to the front line”.

The speed and surprise of the advance is the biggest reversal of fortune for the Russians since their withdrawal from Kyiv and towns north and west of Kharkiv at the end of March. It conforms to optimistic predictions by western analysts that the loss of thousands of troops in the initial invasion, and thousands more in the battles for small gains in Luhansk in the summer, had severely damaged morale.

There was little sign of that in late August, at the start of the Ukrainian army’s Kherson offensive, when the Russians held firm along most of the front, inflicting hundreds of casualties on their enemy.

President Putin’s forces will now be expected to reinforce the key cities of not just Kherson but Melitopol and Mariupol too to preserve their control of the Black Sea coast but the rout in Kharkiv province has made the outcome of the war more unpredictable.

“I believe that this winter is a turning point and it can lead to the rapid deoccupation of Ukraine,” President Zelensky said. “If we were a little stronger with weapons, we would de-occupy faster.” He said the Russians were “showing their best side: their backs”.

Last night, the Russians hit back, using cruise missiles to strike the main power plant in Kharkiv and other infrastructure, including water stations. All power was lost to the cities of not just Kharkiv but Dnipro, Poltava and Sumy.

“No military facilities, the goal is to deprive people of light and heat,” Zelensky said on Twitter.

There were long queues reported on the Russian border as some pro-Kremlin residents preferred to seek safety there. In many villages, though, the Ukrainians were welcomed as liberators, hugged and kissed by the mainly elderly residents who had stayed behind.

Lyda Korobka, one of those villagers, said her house had been caught in the crossfire between the two armies and her roof was still on fire when the Ukrainian troops rolled in. Her chicken shed had already burnt down, with the loss of eight birds.

“You’re saved, grandma,” they shouted to her.

“But everything’s gone,” she replied.

“Just be happy you’re alive,” they answered. Born in 1941, under German occupation, this was the second liberation of her life.

For her nephew, Viktor, the Ukrainian offensive came too late: he was hit by a shell in June, five days before his 49th birthday. He had tried to join his brother in Balakliya, his mother, Nataliia Skirta, 86, said, but the Russians had let only his wife and children go.