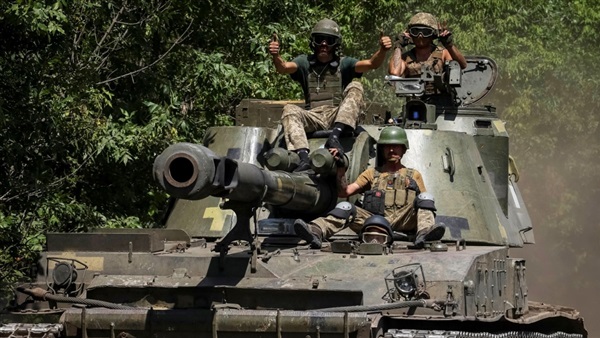 Russian forces suffered their worst defeat since March yesterday when they were forced to abandon their main foothold in the northeast of Ukraine to avoid encirclement in a rapid counter-offensive by Kyiv’s troops.

Military analysts spoke of a possible turning point in the war. Moscow tried to portray the hasty retreat from several vital strategic strongholds near Kharkiv as an orderly redeployment.

Ukraine broke through one of the war’s most hotly contested front lines, taking back dozens of towns and villages in a shock offensive that began five days ago.

“It’s of historic importance,” said Sir Lawrence Freedman, professor of war studies at King’s College London. “It might be a tipping point, we don’t know quite how this will work out but there’s a lot of panic and anxiety among Russian troops right now.”

Social media was awash with images of Ukrainian civilians lining the streets of their villages shouting “thanks boys!” as their “liberators” drove past; and of a bedraggled Russian army in retreat with burnt-out vehicles bearing the “Z” symbol of the invasion, boxes of ammunition and other kit abandoned on roads. It was not known how many Russian soldiers had been killed, wounded or captured.

Natalia Popova, a regional official, posted photos of troops raising the nation’s flag over Kupiansk, an important railway hub and one of Russia’s key supply routes to the east.

Later Russia tacitly acknowledged the loss of Izium, a city that it spent weeks trying to capture in the spring and then turned into its main logistics hub in the northeast. The defence ministry in Moscow said that it had ordered troops to leave the vicinity to reinforce operations in the neighbouring region of Donetsk, the state-run Tass news agency reported. Ukraine did not confirm the city’s capture.

In London, the Ministry of Defence said earlier in an intelligence update that the Russian force at Izium “is likely increasingly isolated” and added that the capture of Kupiansk would be “a significant blow to Russia because it sits on supply routes to the Donbas front line”.

Kyiv appears to have taken advantage of Russia’s redeployment of some of its best troops from the northeast to the southern city of Kherson, the focus of a much-advertised Ukrainian offensive that began just over a week ago. This left Russian positions in the northeast thinly held and vulnerable.

Ukraine punched through them: President Zelensky claimed that at least 30 “settlements” had been liberated in the Kharkiv region since the offensive began on Tuesday.

“The Ukrainians saw an opportunity and did a very good job to seize it,” said General Sir Richard Barrons, a former British Army commander.

“It’s good news they’re on the offensive, showing the Russians can be beaten. It’s very bad for Russian morale in the military and at home.”

He sounded a note of caution, however. “There will be exuberance, over-selling. But Russia still sits on 20 per cent of Ukrainian territory. The battle for Kherson is what really matters strategically,” he said, referring to the southern city, a gateway to Crimea and ports on the Black Sea. “This is going to go on for some time.”

Freedman called Ukraine’s offensive “quite spectacular” and predicted it would have “knock-on effects” such as undermining Russian propaganda.

“It wouldn’t surprise me if things carried on moving quite quickly now, these things have a momentum of their own,” he said.

“All those people nagging at the Ukrainians to accept negotiations, that doesn’t look so good now.”

The Russian withdrawal from Izium, and other towns across the region, was the most significant shift in Kyiv’s favour since Moscow’s forces fled in disarray from around the capital in March.

Ukraine recaptured the territory in a fast-moving push through Russian lines that was launched on Tuesday in conjunction with its slower-moving offensive around the city of Kherson in the south.

Moscow acknowledged that its front line had collapsed in the Kharkiv region but said that it was rushing reinforcements to the area.

Russian-installed regional officials had called for civilians to evacuate the cities of Kupiansk and Izium. Vitaly Ganchev, a Russia-appointed official, admitted on Friday that Ukraine had won what he called a “significant victory”.

Ukrainians commentators were ecstatic. Illia Ponomarenko, a reporter for the Kyiv Post, called the apparent rout “one of the most spectacular f***-ups in Russian military history”.

Vladimir Putin, the Russian president, has yet to refer to any battlefield setbacks. He was seen inaugurating a new ferris wheel in Moscow yesterday, saying, with a laugh: “140m tall, there’s nothing like it in Europe” — it is 5m taller than the London Eye.

The rout in northeastern Ukraine was not the only bad news for Putin.

It emerged that a group of district council members in St Petersburg, his home city, had called for him to be charged with treason and removed from office in a rare domestic protest against the war in Ukraine.

Predictably, the councillors were informed by police that they were facing legal charges “due to actions aimed at discrediting the government”.

Ukraine’s rapid advance in the east is by far its most striking success in months after a long period in which the war seemed to have turned into a slow and relentless grind along entrenched front lines.

It came a week after Kyiv had begun its long-awaited counteroffensive to take back Russian-occupied territory at the other end of the front line, hundreds of miles to the south in Kherson.

Less information has been made public about that operation, although Ukraine has claimed some success in cutting supply routes to thousands of Russian troops on the west bank of the Dnipro river. “We see success in Kherson now, we see some success in Kharkiv and so that is very, very encouraging,” Lloyd Austin, the US defence secretary, said on Thursday.

Mark Hertling, a retired four-star general and former commander of US ground forces in Europe, tweeted: “Make no mistake, Ukraine is executing a brilliant manoeuvre focused on terrain objectives to ‘bag’ Russians.

“But the Russians are helping them — by doing very little to counter.”

Speaking about the Ukrainian offensive at the Nato headquarters in Brussels on Friday, Antony Blinken, America’s secretary of state, said: “The initial signs are positive, and we see Ukraine making real, demonstrable progress in a deliberate way.”

He, too, sounded a note of caution, however: “This is likely to go on for some significant period of time.

“There are a huge number of Russian forces in Ukraine, and unfortunately, tragically, horrifically, President Putin has demonstrated that he will throw a lot of people into this at huge cost to Russia.”

Meanwhile, Ukraine’s atomic power operator, Energoatom, said today that the last reactor at the Zaporizhzhya plant, Europe’s largest, has been shut down after it was reconnected to the electricity grid.

“Preparations are under way for its cooling and transfer to a cold state,” the company said in a statement.

The plant, which holds six reactors, was taken off the grid last week after all its power lines were disconnected as a result of conflict in the area.

Energoatom said the risk of further damage to the line “remains high”, which would force the plant to be “powered by diesel generators, the duration of which is limited by the technological resource and the amount of available diesel fuel”.

Russia and Ukraine have accused each other of shelling the plant.

Kyiv on Wednesday urged residents of Russian-occupied areas surrounding the plant to evacuate for their own safety.