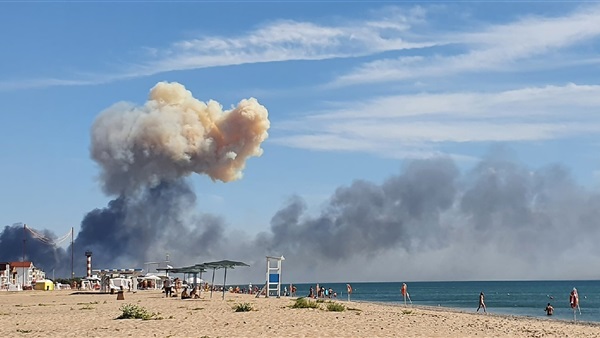 A series of huge blasts at a Russian airbase 200km into occupied Crimea prompted speculation that the US has provided Ukraine with longer-range tactical missiles.

At least 12 explosions yesterday rocked the sprawling Novofedorivka site near the town of Saki, thought to be home to Russia’s 43rd Air Regiment.

Videos showed clouds of smoke and flame mushrooming into the air as astonished Russian tourists watched from sun-loungers on a beach near by.

Although Ukraine’s military would neither confirm nor deny an attack, a former Ukrainian official hinted that the US had supplied missiles with a longer range to Kyiv. “As you can see, missiles with a range of 200-300km are already being used in our country,” Viktor Andrusiv, a former adviser to Ukraine’s ministry of internal affairs, said.

“The explosions in Melitopol and today at Novofedorivka are proof of this . . . in the context of the Crimean [Kerch] bridge, I advise the occupiers not to use it in the coming months.”

President Zelenskiy did not directly mention the blasts in his daily video address but said it was right that people were focusing on Crimea.“We will never give it up . . . the Black Sea region cannot be safe while Crimea is occupied,” he said.

If confirmed, it would be the first significant Ukrainian attack on Crimea since Russia annexed the peninsula in 2014. The airbase has been used by Russia for strikes in Ukraine’s south.

Last week frontline intelligence units told The Times that with western help, the Ukrainian military had prepared “a surprise” this week for Russian units pouring south to Kherson from the eastern Donbas front.

Those units are largely supplied from Crimea via the Kerch bridge, which could fall within the 300km range of army tactical missile systems (ATACMS). The US had previously refused to supply these to Kyiv for fear of provoking Russia, supplying instead the guided multiple-launch rocket system (GMLRS), with a range of 70km.

On Friday Ukraine launched its largest airstrike of the war, its air force confirmed, knocking out Russian surface-to-air missile systems. It had earlier said its Soviet-era aircraft had been adapted to fire US AGM-88 anti-radar missiles that have a longer range and are more accurate than their Soviet equivalents. That attack may have cleared the way for long-range missiles that could otherwise be shot down by Russia.

The Kremlin denied that the base had been hit by missiles, blaming an ammunition explosion caused by accidental fire. Russian officials said one person had died and five people, including a child, were injured. The attack adds to Russia’s woes as its campaign in Ukraine stutters. Its troops have taken a month to advance two miles or less in parts of the east as they struggle to recruit enough troops to press forward, British intelligence sources said.

In the most successful assault, towards the city of Bakhmut in Donetsk, the Kremlin’s forces managed six miles in 30 days. Advances elsewhere in Donbas have been slowed or halted. Russia has suffered 70,000 to 80,000 casualties since February 24, the US estimates.