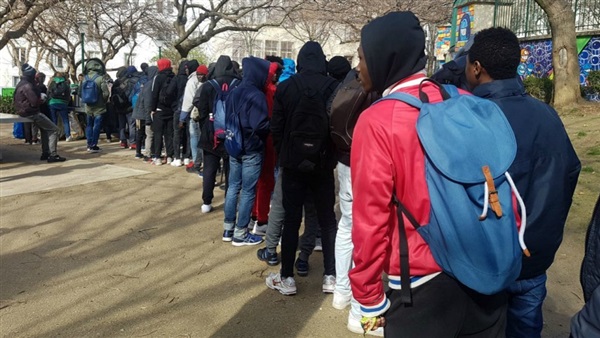 Britain was on a collision course with European judges last night after they intervened at the eleventh hour to block the inaugural deportation flight to Rwanda.

A decision by the European Court of Human Rights (ECHR) in Strasbourg to grant injunctions against the removal of the migrants, including an Iraqi, an Iranian, a Vietnamese and an Albanian, grounded the flight half an hour before it was due to leave.

The privately chartered aircraft, a Boeing 767, was due to leave Boscombe Down military base in Wiltshire at 10.30pm last night, with at least four of the migrants driven to the airfield earlier in the day.

Priti Patel, the home secretary, denounced the ECHR’s intervention, saying she found it “very surprising” that it had contradicted rulings by British courts over the last few days. She insisted she would “not be deterred from doing the right thing” and said officials were working on booking another flight to Rwanda. “Many of those removed from this flight will be placed on the next,” she added.

The government had insisted that the flight would leave even with one migrant on board, despite estimates that it could cost taxpayers hundreds of thousands of pounds. Yesterday, after a series of appeals over the past few days, seven male migrants had been due to board the flight out of an original 130.

An Iraqi citizen was successful in his appeal to the ECHR at 6.25pm, with a document published by the Strasbourg court stating that he should not be removed to Rwanda until three weeks after the High Court had ruled on whether the policy was lawful. A verdict on the judicial review of the Rwanda policy is expected by the end of next month.

The intervention by the ECHR led to the remaining six migrants due to be on the flight lodging their own appeals — some to the Strasbourg court and some to judges in London — with all ultimately having their removal orders scrapped by the Home Office. The last migrant was told he would not be flown to Rwanda at about 10pm.

Responding to the ECHR’s intervention, a government source said: “Domestic courts including the highest court in the land, the Supreme Court, the High Court, the Court of Appeal have repeatedly said we can proceed, yet some foreign court has decided ‘no you can’t’. One out-of-hours European judge has overruled days and days of debate in the UK courts on the papers alone.” Another government source pointed out that a Russian judge was still on the ECHR, although Mikhail Lobov is due to step down in September.

The European ruling came as an estimated 400 migrants arrived in small boats yesterday, taking the total who have crossed the Channel this year to more than 10,500, triple the number that had arrived by this time last year.

The ECHR overruled three of the highest courts in the Britain with its injunctions. The judge in Strasbourg made his decisions based on legal documents submitted to the court after the unnamed migrants had appealed against a High Court ruling rejecting an application for an injunction.

The Strasbourg court interprets the European Convention on Human Rights, a treaty that Britain played a key part in creating in 1950. It was enshrined in UK law by the Human Rights Act in 1998.

Yesterday Boris Johnson opened the door to leaving the convention altogether . The move would take away all jurisdiction of European judges in UK law but would raise questions over Britain’s commitment to human rights.

The prime minister suggested the option was being considered as part of plans to overhaul Britain’s human rights laws by replacing the Human Rights Act with a new Bill of Rights. Johnson said: “The legal world is very good at picking up ways of trying to stop the government from upholding what we think is a sensible law.”

He added: “Will it be necessary to change some laws to help us as we go along? It may very well be and all these options are under constant review.”

Johnson had earlier caused a row with the legal profession by accusing lawyers representing migrants of “abetting” criminal gangs that facilitated the Channel crossings. The Bar Council and Law Society of England and Wales issued a joint statement calling on No 10 to “stop attacks on legal professional who are simply doing their jobs”.

At the start of yesterday’s cabinet meeting, Johnson noted that criticism had come from “slightly unexpected quarters”, a reference to the Prince of Wales, who has privately described the policy as “appalling”, and the Church of England. Addressing senior ministers, he insisted: “We are not going to be in any way deterred or abashed.”

The intervention by the ECHR came despite the Supreme Court dismissing a third attempt by campaigners yesterday to secure an injunction on all flights to Rwanda until the judicial review next month. Lord Reed of Allermuir, president of the court, said assurances in the deal signed with Rwanda would ensure that if the policy were later found to be unlawful, mechanisms were in place to return migrants who had been flown to Rwanda in the interim.

Enver Solomon, chief executive of the Refugee Council, said: “The government must rethink by having a grown-up conversation with France and the EU about sharing responsibility and look to operating an orderly, humane, and fair asylum system.”

The UK played a key role in drafting the Convention in 1950 and it was enshrined in UK law by Tony Blair through the Human Rights Act in 1998.

The Strasbourg court is the ultimate arbiter of the convention. It means that as long as the UK remains a signatory, individuals here can take their case to be heard in Strasbourg.