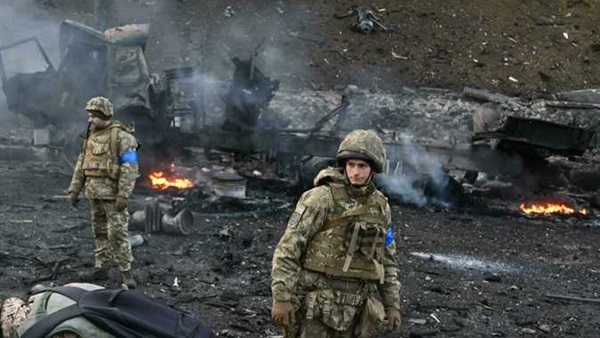 They find him by the smell. In a green field in Vilkhivka, a small village east of Kharkiv in northeastern Ukraine, a breeze carries a sickly sweet, sour stench over to the two Ukrainian soldiers scouring the land.

It is the unmistakable aroma of death, and it leads them to a thicket of trees. There, the body of a Russian soldier lies in the wrecked remains of an abandoned camp. Cat food and clothes are strewn around him; a burnt-out tank on the edge of the field is a clue to how he met his death.

The man is clad in three jackets, worn during the cold winter months when the Russian army occupied Vilkhivka, before Ukrainian forces liberated the village as part of a wider counterattack at the end of March. It has been at least two months since he died, possibly longer, and the body of someone’s son, husband, brother or father is mottled and swollen, its blackened features largely unidentifiable.

“He is sleeping now, on Ukrainian land,” one of the soldiers who has been searching for him says dispassionately. The Ukrainian soldier, who can only be identified by his call sign, “Lawyer”, is part of a two-man team in the Kharkiv region known as the “200” unit — named after the military code for fatalities. He and his partner “Summer” prefer to label themselves “lords of the corpses”. It is their unenviable task to find and collect the bodies of Russian soldiers left behind by retreating forces in order to facilitate their return to their loved ones on request, an obligation of international humanitarian law for troops on both sides.

Regularly driving more than 120 miles a day on patrol, Lawyer and Summer respond to tip-offs from civilians who have stumbled across remains. “It’s the best job in the world,” Lawyer says with grim defiance.

The men’s need for black comedy is understandable. The corpses of civilians and soldiers were found booby-trapped with explosive devices when Russian forces withdrew from Kyiv in April.

The solution is not pretty. Crouched by the corpse, Summer carefully loops a rope around the man’s right boot, making sure not to jog the body. He ties the other end to the front bumper of his car, a safe distance away in the field. Then he reverses, dragging the body until he is satisfied hidden explosives would have detonated.

Pulled over uneven ground, the dead man’s jacket rides up; he is left spreadeagled on a slope, his bloated purple-yellow belly exposed.

Summer and Lawyer are aware of how it looks, but they hardly have an alternative. It is a precautionary technique Ukrainian soldiers have also had to apply to the bodies of their fellow comrades and their own civilians. “If the body is mined,” Summer explains, “it means we keep our life. We try to do it with as much dignity as possible.”

Two other soldiers arrive and the men lift the body into a white plastic body bag. A van with “200” on the windscreen is waiting to carry it to the morgue.

Later, Lawyer treads warily through the abandoned Russian camp, lowering himself into the trenches in search of documents that might help identify the dead man or his unit, still cautious of mines. He collects anything else of use: ammunition, dried food or fuel.

The men’s grisly work gives a stark insight into the wartime repatriation of the dead, often conducted on an exchange basis: a corpse for a corpse.

During the First World War, Britain banned repatriation to avoid “unsanitary” transportation from the trenches. Today, the subject is particularly delicate as it can affect the return of prisoners of war. “Our state is doing everything possible for the Russians to take back their dead ones and give us ours,” Lawyer says.

The following day, in a dusty industrial area on the outskirts of Kharkiv, he stands in the wide doorway of a freight train, a cigarette, as always, dangling from his lips. Behind him are almost 90 body bags, smeared with blood and mud — the fruits of his labour with Summer over the past month. The train carriage, a makeshift morgue until exchanges are agreed, is kept at temperatures below zero, but the day is hot and Lawyer is sweating.

As he checks numbers on the bags against a list in his hand, wiry older locals load some of the bodies onto a refrigerated lorry parked nearby, seemingly oblivious to the overpowering stench and hordes of flies. “Breathe through your mouth, and it won’t stink,” one smiles.

Lawyer will not say where the truck is heading, but The Sunday Times understands that two exchanges of bodies have taken place in the past week, overseen by the International Committee of the Red Cross, which acts as a neutral intermediary. Ukrainian officials said the first was made on a basis of “160 for 160”, the second “50 for 50”.

Before the bodies are exchanged, Lawyer and Summer — and their counterparts in Kyiv, Dnipro and elsewhere — identify as many of the individuals as possible using their belongings, tattoos and other features. Not only does it help in the exchange process, it provides the Ukrainian military with information about which units have been fighting where. DNA swabs are passed on to prosecutors to identify those suspected of war crimes.

The task reminds them what weapons can do to a body. What does this do to their minds? “There is a good phrase from the Second World War: ‘noble rage’,” Lawyer says curtly. It features in the lyrics of a famous Soviet song, The Sacred War.

But he adds: “The war taught me to live in the moment. In our usual life, we don’t understand it — we chase something but we don’t really live. But life is radiant, we have to enjoy this exact moment.”