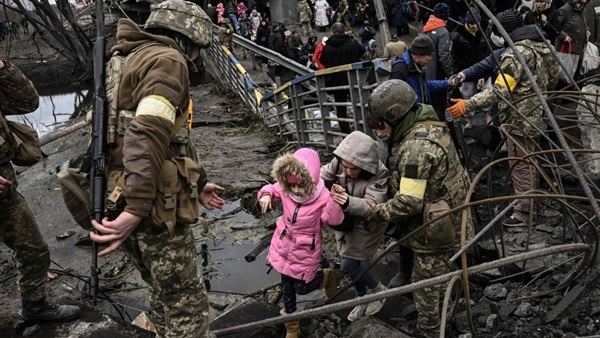 At the meeting last night Charles Michel, president of the European Council, accused Moscow of using grain supplies as a “stealth missile” against the developing world.

Russia’s ambassador, Vassily Nebenzia, accused Michel of spreading lies, despite Ukraine’s inability to export its grain, and stormed out of the meeting.

“Mr Ambassador of the Russian Federation, let’s be honest, the Kremlin is using food supplies as a stealth missile against developing countries,” Michel said at the meeting in New York.

“The dramatic consequences of Russia’s war are spilling over across the globe, and this is driving up food prices, pushing people into poverty, and destabilising entire regions. Russia is solely responsible for this food crisis.”

Michel has visited the vast stockpiles of grain stuck in the Ukrainian port city of Odesa.

President Zelensky has warned that 75 million tonnes of grain could be stuck in Ukraine by the autumn unless anti-ship missiles are provided to break Russia’s Black Sea naval blockade.

There were already up to 25 million tonnes of grain in Ukrainian silos, he said, which exporters were unable to move because of fighting around the ports.

President Putin has dangled the prospect of allowing a Black Sea corridor for ships carrying grain, but only in return for an easing of western sanctions, which has been rejected by Kyiv’s allies.

The British Ministry of Defence warned that since the sinking of the Moskva battle cruiser in April, Russia had moved multiple air-defence assets to Snake Island in the western Black Sea. “Russia’s activity on Snake Island contributes to its blockade of the Ukrainian coast and hinders the resumption of maritime trade, including exports of Ukrainian grain,” it said.

Separately, the Ukrainian army said it had pushed the Russian fleet back more than 62 miles (100km) from Ukraine’s Black Sea coast, where Moscow’s ships have been carrying out a naval blockade for weeks.

Ukraine and Russia account for about a third of the world’s grain supply, and before the war Ukraine had been expected to produce 80.5 million tonnes this year. The shortages have pushed up wheat prices by more than a third since Russia invaded on February 24.

Zelensky said the situation would become more difficult if Russia broke through in the eastern region of Donbas, where the most intense fighting is taking place.

Zelensky had discussed grain shortages with Boris Johnson. “The leaders also discussed diplomatic negotiations and efforts to end the damaging Russian blockade of Ukraine’s grain exports,” a Downing Street spokesman said, without addressing what might be done to ease the shortages in practical terms.

Zelensky said that the discussions with the UK and Turkey had explored the idea of a third country’s navy guaranteeing the safe passage of Ukrainian grain through the Black Sea. The shortage caused by the conflict is becoming acute in some regions. At the World Economic Forum in Davos almost three weeks ago, David Beasley, executive director of the UN’s World Food Programme, described the threat of famine as “a perfect storm within a perfect storm . . . We will have famines around the world”.

Washington has told 14 countries that Russia is trying to pass off Ukrainian grain as its own. The Biden administration suspects Moscow of stealing as much as 500,000 tonnes of Ukraine’s grain, worth $100 million, and loading it on to sanctioned ships in annexed Crimea.

Antony Blinken, the US secretary of state, said that the Russian naval blockade was a deliberate strategy by Putin to force the rest of the world “to give in to him” and eliminate sanctions on Russia. “In other words, quite simply put, it’s blackmail,” Blinken added.

On May 16, the US alerted the countries — primarily in northern and eastern Africa, as well as Pakistan, Bangladesh, Sri Lanka and Turkey — that the Russian cargo vessels Matros Koshka, Matros Pozynich and Mikhail Nenashev were leaving ports near Ukraine carrying what the State Department said was “stolen Ukrainian grain”, The New York Times reported.

The source of grain can be difficult to determine, but US officials advised the countries to be wary of heavily discounted grain. “The United States is working with other countries to prevent the sale of grain that has likely been stolen from Ukraine,” the State Department said.

This presents a dilemma for poorer countries, with the attractive prospect of cheap grain. On Friday President Sall of Senegal, who is also the head of the African Union, met Putin in Russia in an effort to ensure grain supplies.

Zelensky’s appeal for weapons to protect grain exports came as “intense street fighting” raged in the eastern city of Severodonetsk.

Serhiy Gaidai, the governor of Luhansk, said on national television that the position of Ukrainian forces in the city had “worsened a little” yesterday after they had reclaimed a chunk of territory, although he added that they were still holding positions in its industrial zone.

The Russians “have an enormous amount of equipment and personnel”, he added. He said they had shelled a humanitarian centre in Lysychansk and destroyed a bakery, and that 98 people had left the town in the past day.

Gaidai said the number of shellings in Severodonetsk and Lysychansk had increased tenfold as Russia redoubled its efforts.

On Sunday Zelensky visited the Zaporizhzhya region near the Donbas, which is partly under Russian control. It was his second public visit outside the Kyiv area since the war began.