Surrounded, but Ukraine will fight to bitter end in east 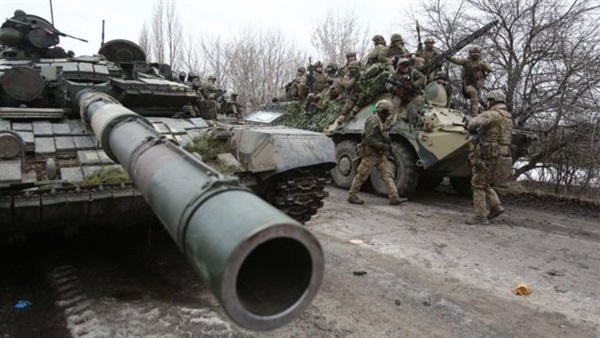 Smoke could be seen rising yesterday over Lysychansk, the last town on the road into Severodonetsk, a key target for the Russians.

In the surrounding valley puffs of white vapour rose from the Ukrainian artillery positions, hidden in the clumps of trees that line the route. “We have pushed the Russians back,” said the officer guarding the last checkpoint before the road descends into the Severodonetsk pocket, now just ten miles from being cut off and surrounded by the invaders. “We can travel down it, but it is under shellfire, and they are so close they can hit the vehicles with sniper fire and even rifle fire, let alone artillery.”

The T1302, an unremarkable B-road heading north, is the main supply line to Severodonetsk and Lysychansk, the only towns in the pocket still under Ukrainian control in Luhansk.

The Russians are applying a pincer from either side. They failed to establish a crossing over the Severskyi Donets river to the northwest of here, losing hundreds of men in the process, but on the east side they have advanced from the town of Popasna and are now applying the full weight of their superiority in quantity of artillery, if not quality, to Ukrainian lines. The Ukrainians are putting American M777 howitzers to good use: they can fire ten miles farther than the standard Russian models, but only a handful have arrived at the front so far.

Those were too late to save Popasna and may be too late to save the rest of this pocket, which has become the key battleground of this second phase of the war, one in which the Russians are more organised than in the attacks on Kyiv and Kharkiv.

There have been reports of some Ukrainian battalions pulling back before they can be surrounded. “It’s very dangerous,” said Maksym Lutsyk, 19, a soldier who was about to return to Severodonetsk after a brief break from the front. “The Russians are using drones to see the situation and the vehicles and then use artillery to shoot at us.”

Some soldiers from the volunteer reserve force have refused to fight on, saying they are too poorly equipped.

Lutsyk said his morale was high, however, and he had no qualms about returning. “If we are encircled we will hold on until someone brings help,” he said.

The Russian successes on the front have deepened a split in Europe. Some countries, like Britain, want to support Ukraine’s fight to the end, until it has liberated territory lost since February as well as in 2014; others believe that at some point a compromise must be sought.