Russia is winning battle to control the world’s wheat 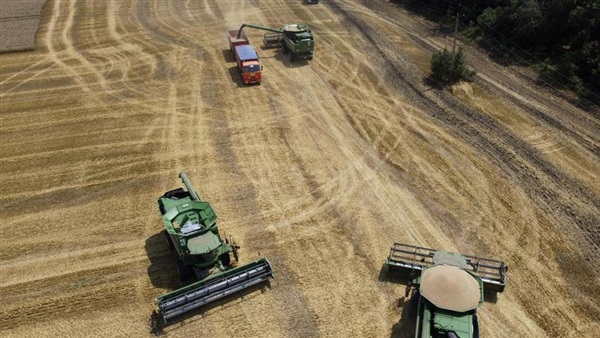 When President Putin began his war, he did so in the hope of subsuming Ukraine and dividing the West. So far, however, his biggest gain to speak of has come in the form of wheat.

Russia’s blockade of ports along the Black Sea has not only placed a stranglehold on Ukraine’s economy but also hobbled a key competitor in the world grain market.

More than 20 million tonnes of Ukrainian grain is rotting in silos and commercial vessels around the country, unable to reach its destination.

Ukraine is the fifth-biggest exporter of wheat and the blockade has sent the price up by 60 per cent since the start of the year, to a near-record high.

Russia, the world’s top wheat exporter, has been only too happy to fill this gap, selling not only more of the commodity but at a higher price. President Zelensky has said that Russia is also attempting to sell grain stolen by its soldiers from farms in occupied regions.

Last month, as Ukraine’s wheat exports fell by 32 per cent compared with April last year, Russia’s rose by 18 per cent, according to AgFlow, an agriculture market analysis company. The Russian Treasury is estimated to have collected $1.9 billion in revenues from wheat export taxes this season.

The blockade has been devastating for Ukraine, which earns about 10 per cent of its GDP through the food and agriculture sector. The sector accounts for about 5 per cent of Russia’s GDP.

“Before the war, Ukrainian wheat and corn exports were growing, whereas Russian exports were declining. Since then though, they have skyrocketed,” Nabil Mseddi, chief executive of AgFlow, said. “The loss in Ukraine’s export volumes matches almost exactly Russia’s gain. It therefore could be interpreted quite accurately as sidelining of a trade rival.”

The two countries share many of the same export partners, located for the most part in north Africa and the Middle East. Faced with the possibility of food shortages, many are turning to Russia to make up the shortfall.

While the Kremlin swells its coffers, as many as 50 million people around the world are at risk of starvation, ccording to the World Food Programme,which is part of the UN.

Ursula von der Leyen, the president of the European Commission, said this week that Russia was “using hunger and grain to wield power”.

Talks are under way in Ankara to open a “humanitarian corridor” for grain shipments through the Black Sea, and there have been suggestions that Nato ships might escort cargo vessels.

Putin, however, has sought to blame western sanctions for the crisis, saying that he would consider lifting the blockade only in exchange for a relaxation of the embargos. Dmytro Kuleba, Ukraine’s foreign minister, told Davos: “You could not find a better example of a blackmail in international relations.”

Russia’s ability to hold the grain market to ransom marks a remarkable turnaround of its agricultural sector over the past 20 years. For much of the second half of the 20th century the country relied hugely on imports from North America. In 1999, the year before Putin became president, Russia had a trade deficit for wheat of $354 million. Increasing production to reach self-sufficiency was one of the new president’s key priorities, and by 2002 the country had become a net exporter, selling $884 million of wheat each year.

By 2017 Russia had overtaken the US and Canada to become the biggest exporter of wheat, selling just over $8 billion worth. It is not a coincidence that this ascent occurred after the annexation of Crimea in 2014, when Russia was hit by western sanctions.

Agriculture remained one of the few sectors not under sanctions and thus provided key sources of foreign capital, as well as a tool to wield influence over importer nations, Caitlin Welsh, director of global food security at the Centre for International and Strategic Studies, said. “The West very deliberately didn’t sanction Russian agriculture as it would be far more harmful for those countries that rely on Russian wheat,” she said. “When the Kremlin says that the food crisis is being caused by western sanctions that is entirely untrue as agriculture is not under sanction.”

As a measure of the importance with which Putin views grain to the future of the Russian economy, he has appointed the son of one of his closest allies as his agriculture minister. Dmitry Patrushev, whose father is Nikolai Patrushev, secretary of the security council and a former FSB director, has been tasked with adding another 50 per cent to the value of agricultural exports by 2024.