Donbas has been completely destroyed by Russia, says Zelensky 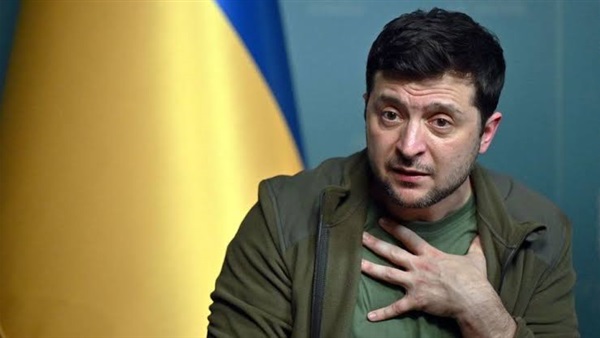 President Zelensky has accused Russia of “completely destroying” the eastern Donbas region and deliberately trying to murder Ukrainians as a battle for the former industrial heartland rages on.

In his nightly address from Kyiv, Zelensky said that the war in Donetsk and Luhansk provinces had turned the region into “hell”, while shelling attacks continued in other areas. “[There are] constant strikes on the Odesa region, on the cities of central Ukraine. The Donbas is completely destroyed,” he said. “All this has no and cannot have any military explanation for Russia”.

The Ukrainian defence ministry accused Russia yesterday of intensifying its attacks in the wider Donbas area and preventing refugees from fleeing. It said Moscow was using heavy firepower to damage Ukrainian defences near the city of Donetsk, which is held by pro-Kremlin separatists.

Shelling in Luhansk province has killed 13 civilians over the past 24 hours, the regional governor, Serhiy Gaidai, said today, after previous deadly attacks on homes and businesses. Ukraine’s military said that Russia’s army is advancing in the areas of Lysychansk and Severodonetsk, in the Luhansk region.

Zelensky said that Russian tactics in the Donbas involved “a deliberate and criminal attempt to kill as many Ukrainians as possible, destroy as many houses, social facilities and enterprises as possible”.

He referred to “the brutal and completely senseless bombardment of Severodonetsk”, a town in the region, where another 12 people died and dozens were wounded “in just a single day”.

Zelensky said that Russian strikes on the northeastern Chernihiv region had included a terrible strike on the village of Desna, where many were killed and rescuers were still going through the rubble.

“[Russia] is trying to exert even more pressure. It is hell there [in the Donbas] — and that is not an exaggeration.”

Moscow’s offensive in the east has lasted a month since what was announced as a new phase in the invasion that started on February 24.

President Putin’s forces have made limited progress against established Ukrainian defences, who have been fighting for control against Kremlin-backed separatists since 2014.

In London, the Ministry of Defence warned that Russia was likely to send reinforcements to the east from Mariupol, where a long siege ended with the surrender of Ukrainian troops this week.

As many as 1,700 Ukrainian soldiers are likely to have surrendered from the Azovstal steel factory, which was the southeastern city’s last bastion of resistance, and it is not clear how many are still holding out, the ministry added.

“Once Russia has secured Mariupol, it is likely they will move their forces to reinforce operations in the Donbas,” it said in its latest briefing.

The MoD said that staunch Ukrainian resistance in Mariupol meant that Russian troops there “must be re-equipped and refurbished before they can be redeployed effectively — this can be a lengthy process when done thoroughly”.

However, it suggested that Russia would “probably redistribute their forces swiftly without adequate preparation” because Putin’s military chiefs were under pressure to achieve a breakthrough.

Russia has now occupied a large part of southern Ukraine and its blockade of ports on the Black Sea is contributing to global food price rises and threats of famine. The conflict has already cost tens of thousands of lives and created 13 million Ukrainian refugees.

In Kyiv, Zelensky thanked the United States for the $40 billion aid package, which got final congressional approval on Thursday. He also thanked the European Union for its support. He said that Ukraine’s monthly budget deficit was $5 billion “and so to survive in the war for freedom, we need quick and sufficient financial support”.

The Chernobyl nuclear power plant was seized by Putin’s forces in the early stages of the invasion. Ukraine’s State Bureau of Investigation (DBR) said that the deputy director general of the plant had been arrested on suspicion of collaborating with the Russian military.

The bureau said that the official, named by local media as Valentyn Viter, was suspected of deserting his post and hiding in the Transcarpathian region, in western Ukraine.

“The serviceman fled the station and did not provide physical protection for the facility, which was directly part of his functional responsibilities,” the DBR said in a statement. “In addition, during the investigation, DBR officers are investigating the possible involvement of the official in carrying out subversive activities against Ukraine. In particular, they must determine whether he assisted the Russian military in capturing Chernobyl in late February.” Russian forces later withdrew from the plant and other northern regions as their attack on the capital Kyiv failed.

However, the Russian-installed governor in the southern city of Kherson, which was captured in early March, has said that the region will soon be fully integrated into Russia.

Volodymyr Saldo declared on Telegram that there would soon be a “Kherson region of the Russian Federation”. His deputy, Kirill Stremousov, wrote that residents would be able to apply for Russian citizenship in the coming weeks as the situation stabilised.