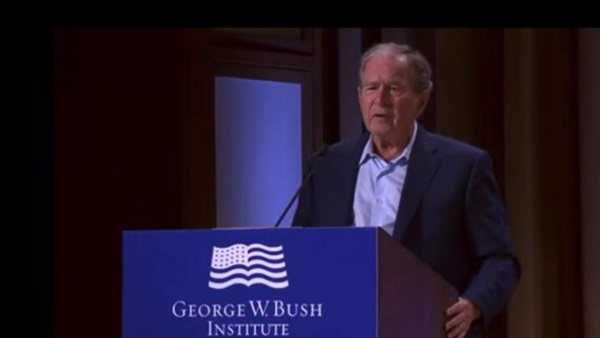 George W Bush confused the wars in Ukraine and Iraq during a speech condemning President Putin — describing the invasion of Iraq as the “brutal” and “unjustified” actions of one man.

The former US president was speaking at the George W Bush Institute in Dallas, where he criticised Russia’s political system. “The result is an absence of checks and balances in Russia, and the decision of one man to launch a wholly unjustified and brutal invasion of Iraq,” he said, before correcting himself and quickly adding: “I mean, of Ukraine.”

He blamed the apparent misstep on his age as audience members laughed along with him. He made a conciliatory gesture and mumbled, “Iraq, too”, before adding: “Anyway. I’m 75.”

In March 2003 Bush initiated the US invasion of Iraq following allegations that the regime had weapons of mass destruction. Such weapons were never found.

The protracted conflict toppled Saddam Hussein, killed tens of thousands of people, displaced many more and left a power vacuum in the Middle East, leading to the rise of terrorist groups such as Islamic State.

A study by Iraq Body Count estimates that 122,438 people died during the invasion and subsequent violent insurrection between 2003 and 2013.

Video of the slip-up was shared on Twitter by the Dallas News reporter Michael Williams and has been viewed almost 7 million times.

In his speech given Bush described Ukraine’s President Zelensky as a “cool little guy” and likened him to Winston Churchill. Bush also directly condemned Putin for invading Ukraine.

The 43rd president has been so gaffe-prone over the years that the term “Bushisms” was coined to describe his unconventional statements, pronunciations and Freudian slips.

In January 2000 he said: “Rarely is the question asked: is our children learning?” Later that month he followed that up with the phrase: “Working hard to put food on your family”.