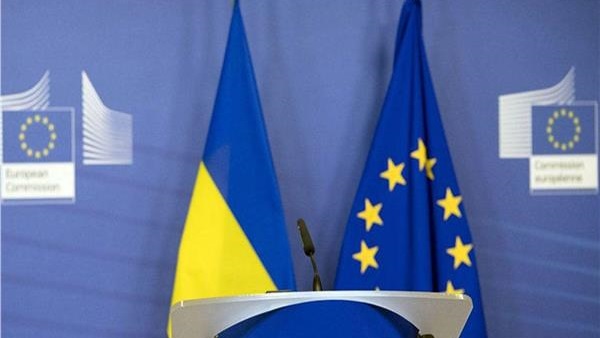 Judging by the number of European Union leaders visiting Ukraine in recent weeks it would be easy to assume it is Brussels that is solely responsible for equipping the brave resistance of President Zelensky and his people.

But while Charles Michel, president of the European Council, talks of the EU’s “unprecedented” response to Russian aggression, saying the EU is “determined to do everything we can to support Ukraine”, the sad reality is that beneath all the rhetoric, the photo opportunities and recycled pledges, the EU continues to prevaricate while it is the Anglosphere that is busy helping Ukraine to save itself.

In fact, if Ukrainians were relying on the EU alone, the war might already be over. And we would be looking at a weak, dismembered and Russian-controlled Ukraine.

Monologues on Ukraine’s “European future” from EU leaders are not stopping Russian tanks or crippling Russian artillery. It is not the EU that is preventing the subjugation of Ukraine. Rather, it is the arms, materiel and intelligence-sharing provided promptly, and without conditions, by the Anglosphere — the United States and Britain in particular — that has been crucial in giving Kyiv’s soldiers a fighting chance at freedom.

In the first month of the conflict, the military support proffered by the US — nearly $4.4 billion — was more than double that offered by EU member countries and European institutions combined. And that was before President Biden’s request to Congress for a further $20 billion in direct military support, with an additional $12 billion for economic and humanitarian assistance.

Even Britain — yes, unreliable, detached, infuriating Britain — provided Ukraine with more military aid in that pivotal period than any EU member country. And that support was recently expanded after Boris Johnson addressed the Ukrainian parliament.

Such has been the speed of Britain’s response that even President Zelensky acknowledged other western countries should “follow the example of the United Kingdom”.

So much for Washington and London not caring about Europe.

Remarkably, while the US and UK are busy helping to arm Ukraine and protect European democracy, the EU’s only nuclear force — France — remains largely unforthcoming on military aid. And support from Europe’s largest economy continues to be dragged out of Berlin like one of those half-empty Bundeswehr supply depots, while Italy, as always, remains visible but hopelessly irrelevant.

Even the EU countries providing meaningful materiel to Ukraine — Estonia, Poland, Lithuania, Slovakia and the Czech Republic chief among them — are facilitated by the US replenishing (and modernising) their military stocks. This approach has allowed Czech tanks, Slovak air-defence systems and much more to make a difference on the ground in Ukraine — an approach eventually adopted by Germany as part of the wider US-led international coalition.

But the real lesson to be drawn from all this is that rhetoric about European “strategic autonomy” is a Parisian fantasy given oxygen by Brussels.

Brexit has left the EU bereft of a member with world-leading military and intelligence-gathering capabilities. However, the conflict ensures that British armed forces — and equipment — will have to remain an important element of the EU’s collective security strategy, regardless of the prevailing political climate.

And most importantly, this war has shown that Nato, underpinned by the US and Britain, and with eastern European members as its bedrock, is the future of European security. A Scandinavian-Baltic arc, possibly including Finland and Sweden, stretching from the Baltic to the Adriatic, will be overwhelmingly supplied with US equipment, British intelligence and Nato logistical support.

The future leadership of Europe’s defence must lie in its east, but for Brussels, the challenge now is to match its grandiose self-image with the realities of an Anglosphere-dominated defence of Ukrainian freedom — and of European values.

For this to occur, a little humility is required. The EU won’t be capable of defending itself any time soon. It cannot project power in its immediate neighbourhood, nor act as a significant military partner for the US or Britain.

Brussels should be wooing Washington, London, Canberra and Ottawa — not scorning them.

Announcing the delivery of armoured vehicles to Ukraine, Scott Morrison, the Australian prime minister, said he believed “this fight is important because not only are Ukrainian lives and their lands at stake, but so are the principles of freedom and the rule of law”.

And the only way the EU will survive is if the Anglosphere keeps supporting these principles that inspired its establishment.