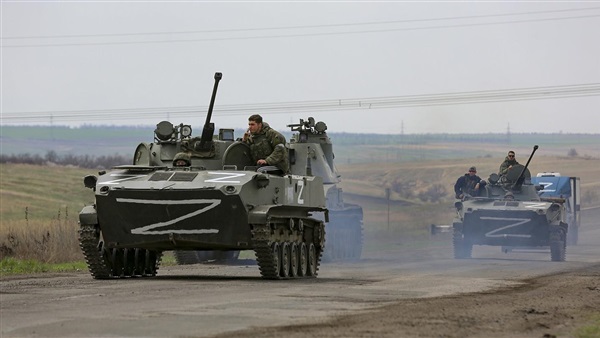 President Putin’s troops are likely to have given up on a “large-scale encirclement” of Ukrainian units in part of the eastern Donbas region, according to military analysts, as the invaders were pushed back to the Russian border near the city of Kharkiv.

Russian forces appear to have abandoned the objective of surrounding the defenders holding a pocket of territory between the cities of Donetsk and Izyum in favour of completing the seizure of the Luhansk region to the northeast, according to the latest assessment by the Institute for the Study of War (ISW), a US-based think tank.

Ukrainian officials claim to hold only about 10 per cent of the easternmost Luhansk region, much of which, along with Donetsk, aligned with Moscow as a self-declared separatist republic eight years ago. Fully capturing the two regions became the Kremlin’s stated priority in the last month, but Russia’s assault has been slow and checked by Ukrainian resistance.

Ukrainian troops pushing back invading forces from the northern city of Kharkiv have reached the Russian border, the regional governor claimed today.

Oleh Sinegubov, the Kharkiv region governor, made the comments on the Telegram messaging service. It was not immediately clear how many troops had reached the border and where. The claims were not independently verified.

Nearly three months into the invasion, Ukraine has been retaking territory in its northeast, driving Russian forces away from Kharkiv, the second-largest city in the country.

Lesia Vasylenko, the Ukrainian MP, tweeted footage of a Ukrainian military unit that she said had “pushed Russia back to the border and reinstalled a Ukraine border sign” in the Kharkiv region. “It’s a start. More work to be done on this,” she wrote.

The soldiers gathered around a makeshift blue and yellow border post and flashed “V” signs for victory as they addressed President Zelensky. “We are here. We are at the border,” they said.

Kharkiv — the northern suburbs of which are just ten miles from the Russian border — was among the first cities targeted by Putin’s forces in the early stages of the invasion and has suffered regular and heavy bombardments since late February.

Russia’s failure to take over the city should be regarded as a defeat, according to General Sir Richard Barrons, former commander of UK Joint Forces Command.

“It was just way too big an objective for the Russian military,” Barrons told Today on Radio 4, adding that Russia “doesn’t have the numbers, the will or the skill to take large cities”.

“When [the Russian military] got stuck on the outskirts, it became an easier target for a very aggressive and successful Ukrainian counterattack, and trying to sit around Kharkiv became much less important than the fight under way in the Donbas,” he said.

Barrons said that Russia’s failure around Kharkiv did not necessarily amount to a failure of the Russian invasion on its own terms, however, adding that its focus was now to advance in the east of the country.

Ukrainian border guards repelled an incursion by a Russian sabotage and reconnaissance group in the northeastern region of Sumy today, the regional governor said.

Dmytro Zhyvytsky wrote on Telegram that the Russian group entered Ukrainian territory under the cover of mortar shells, grenades and machine gun fire but retreated after the border guards fought back.

At a Nato meeting in Berlin yesterday, Liz Truss, the foreign secretary, said: “Putin must face a sustained defeat in Ukraine, Russia must be contained and such aggression must never happen again.” The meeting of Nato foreign ministers agreed to provide more weapons and other support for Kyiv.

Annalena Baerbock, the German foreign minister, said that Nato would provide military assistance “for as long as Ukraine needs this support for the self-defence of its country”. Jens Stoltenberg, Nato’s secretary-general, added: “Ukraine can win this war. Ukrainians are bravely defending their homeland.”

Putin abandoned his original plan to take the capital, Kyiv, and other major cities to focus on the eastern Donbas region. However, progress has appeared to be relatively slow, with the invaders advancing just one kilometre a day rather than the expected 40km a day. Western officials have pointed to an operation that is grinding to a halt as a result of carefully targeted Ukrainian offensives. The same problem beset the invading force outside Kyiv in the early days of the war, when artillery strikes and bad weather hampered the advance.

Yesterday the British Ministry of Defence said that Russian forces may have lost a third of their personnel, killed and injured since the invasion of Ukraine.

The ministry’s assessment of the state of the conflict reported that the main thrust of Russia’s attack, the offensive in the Donbas region, had fallen “significantly behind schedule”.

“Despite small-scale initial advances, Russia has failed to achieve substantial territorial gains over the past month whilst sustaining consistently high levels of attrition,” it said. “Russia has now likely suffered losses of one third of the ground combat force it committed in February.”

Today, however, the MoD said that Putin’s ally Belarus was deploying troops near the border to keep Ukrainian troops pinned down there, preventing them from moving to support the counteroffensive in Ukraine’s eastern industrial heartland.

“Belarusian President Lukashenko is likely balancing support for Russia’s invasion with a desire to avoid direct military participation with the risk of Western sanctions, Ukrainian retaliation and possible dissatisfaction in the Belarusian military,” the MoD said.

Russia’s forces at the outset of what Putin calls a “special military operation” were estimated at between 150,000 and 190,000 men. Of these, the Kremlin is thought to have committed 99 battalion tactical groups, each made up of approximately 900 men along with tanks and armour, to the front lines.

In a further sign of Russia’s struggles, Serhiy Haidai, governor of the Luhansk region, said that the Russian military command probably believed that it would not be able to seize Donetsk region but thought it had the capacity to reach the administrative borders of Luhansk.

The ISW said his observations were generally consistent with its analysis, adding that the Russian military command was now likely to prioritise capturing the city of Severodonetsk, control of which would enable Russia to drive west and link up with forces pushing southeast of the city of Izyum, 80 miles south of Kharkiv.

Some efforts would be dedicated to disrupting Ukrainian ground lines of communication in Donetsk region, according to its assessment.

The think tank added that Russia had probably run out of combat-ready reserve forces, forcing the military command to gather soldiers from different units, including private military and proxy militias, and combine them with regular army units and naval infantry.

The Ukrainian general staff reported that about 2,500 Russian reservists were training in Belgorod, Voronezh and Rostov regions to boost Russian offensives in Ukraine.

However, the ISW said that the number was unlikely to supplement Russian units which had reportedly lost 20 per cent staffing in some areas.

In southern Ukraine Russian forces appeared to be preparing for the long haul by fortifying occupied settlements, the ISW said. Ukrainian officials reported that Russian forces had started digging trenches and building concrete revetments in unspecified areas of Mykolaiv and Kherson region, near Melitopol, and in the vicinity of the western city of Zaporizhia.

Russia continued to launch military, air and naval strikes on the Azovstal steelworks complex in the southern city of Mariupol, but the remaining Ukrainian forces holding out there have maintained their positions, the ISW said.

Mykhaylo Podolyak, a senior adviser to President Zelensky, said that Ukraine could defeat Russia by the end of the year but needed heavy weapons from the West and a “real oil embargo” on Russia, according to the BBC.