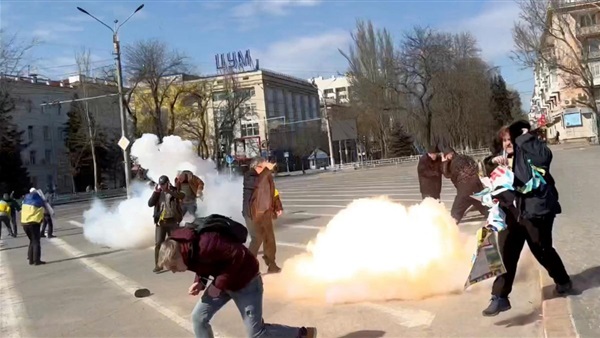 The screams of the tortured can sometimes be heard in the corridors of the regional administration building of occupied Kherson, where President Putin’s handpicked governor is preparing for annexation by Russia.

The white, blue and red tricolour already flutters above the columns of the building’s Soviet façade. Inside, Volodymyr Saldo is busy planning the roll-out of the Russian rouble, Kremlin-approved schoolbooks and a celebration worthy of Moscow television.

No firm date was set when his military administration announced earlier this week they would seek annexation, but Saldo is determined to push it through before the end of the year, dispensing with the formality of a faux referendum.

“Here we will most likely focus on the experience of the Crimea, the Donetsk People’s Republic and the Luhansk People’s Republic, who have passed this stage. It was fast in Crimea, it was very long in the DPR and LPR, but we will go through it faster,” he said.

Yet the Ukrainian government is still functioning in Kherson. In a modern office block less than a mile across town, the city’s elected mayor, Ihor Kolykhaiev, operates a parallel reality from his computer screen. Ejected from his office in the city council by Russian soldiers on March 25, he continues to run the city remotely, 71 days after its capture on March 3.

“My impression after talking with the Russians is that they do not understand what they are doing here,” Kolykhaiev, 51, told The Times. “They want to show Moscow the picture that the city is under the control of the Russian Federation, but the city infrastructure is very difficult to manage.”

When Kherson first fell, Kolykhaiev was interrogated by Russian army officers and the FSB. They demanded he remove the Ukrainian flag and collaborate. When his entire staff refused, they did not press the issue, fearing the complete collapse of the first city they had captured would make for poor propaganda.

“They have three forces — the FSB, the GRU and the army and they don’t have a strategic development plan because their script failed,” said Kolykhaiev. “There are many soldiers from the DPR in their army who are undisciplined and just make a mess. There is also the Russian National Guard, who see this an opportunity for personal enrichment, so they are preoccupied with looting and theft.”

With a warm southern climate and an abundance of water coursing through it toward Crimea, the Kherson region is famous for its juicy tomatoes and rich, flavourful watermelons. While the Russians claim to be building a new federal state to join the motherland, their troops are busy bleeding the area dry of agricultural produce and equipment, sending it back for sale in Russia.

Chechen fighters roam the countryside stealing everything from chickens and vegetables to an entire 20,000 hectare agribusiness and its tractors. They clash with other Russian forces over the spoils of war.

Inside the city, the mayor exists in limbo, communicating with Kyiv despite living amongst the Russians. While they piece together a statue of Lenin toppled as part of Ukraine’s decommunisation effort, he is on a video call with President Zelensky, exploring ways to continue operating without becoming a collaborator.

“We must keep the city’s critical infrastructure running. Electricity supply, heating, water supply, transport, medical institutions, schools, and kindergartens should function in the city,” Kolykhaiev said. “It is only possible to do this as long as Ukraine can pay salaries and make the payments necessary for the functioning of the city’s infrastructure.”

It is no easy task. The internet the mayor relies on to run the city has been re-routed via Crimea, so all their communications can be surveilled by Russia. Private companies and most government agencies have already had to close. If paid at all, workers have to accept a reduced salary and are running out of money. Supermarkets are closed and food is mostly provided by enterprising Russians from Crimea, who sell their own produce on city streets and move into abandoned homes. And the city is already desperately short of essential medical supplies such as insulin and oxygen.

Looking tired and gaunt, the mayor said his team had been reduced by half as staff joined an estimated 45 per cent of Kherson’s pre-war population of 300,000 fleeing the city.

His office tries to keep track of people kidnapped by Russian troops. There are more than 300 names on the list so far. The latest is Iryna Petrova, a 37-year-old UEFA referee who served as linesman at matches for the England women’s team. She was last seen being dragged to a police station on May 9 by a group of drunk men, having refused to adjudicate a game put on by the Russians to celebrate Victory Day. There have been reports of rape across the region.

Oleh Baturin, a journalist from the town of Nova Kakhova, Kherson region, told The Times he had heard the screams of women in neighbouring rooms when he was seized by Russian soldiers on March 12 and held in the Kherson regional administration building.

He was ambushed and bundled into a minivan on his way to meet a Ukrainian activist. At the local police station the Russians beat him until four of his ribs were broken, then took him to the Kherson administration for interrogation and further torture.

“The Russians were interested in who organised the [pro-Ukrainian] rallies in Kherson, who ran the Telegram channels, whether there were Belarusian journalists or activists in Kherson, who had weapons, and the addresses of journalists,” Baturin said. He was released after the eight days, but the activist he went to meet has disappeared.

The rallies, which attracted thousands of protesters against occupation daily at the start of the war, ceased two weeks ago. The Russians began to crack down on the unarmed protesters more violently, shooting two in the legs and using stun grenades to disperse crowds. They have intensified their hunt for the organisers.

“The Russians went from house to house looking for the heads of the condominiums, asking them who lived where in the building,” said one woman who attended the protests. “They even came to our house and knocked on the door, but we did not open it. There were six men armed with automatic rifles.

“Later they started coming to specific addresses, having already made some lists, kidnapping people, and taking them away.”

The resistance has now moved underground. It takes many forms. A mannequin, dressed in Russian military uniform, hanging by the neck from a tree. Signs wrapped round lamp posts warning: “We are close” and threatening Russian soldiers with death at the hands of partisans. Prayers for the Ukrainian troops just 20km away, pushing the Russians back around the borders of the city.

Residents refuse to use the Russian rouble and exchange any for the Ukrainian Hryvniya as soon as they can. They install VPNs to protect their internet use and laugh at the Russian propaganda broadcast from the Kherson TV tower. Teachers ended the school year early to avoid the imposition of the Kremlin curriculum and its rewriting of Ukrainian history.

As the war drags on though, the start of the next school year creeps closer. The longer Russia holds on to Kherson, the more risks those who defy Russian rule will face. If Moscow is able to consolidate control over the city, there will come a time when the occupiers no longer need to tolerate a Ukrainian mayor.

“I do not know what will happen tomorrow,” said Kolykhaiev. “I do not close the doors of my house, because in the occupied city there is no possibility of protection and resistance. They can come to me at any moment and there is nothing I can do about it.”