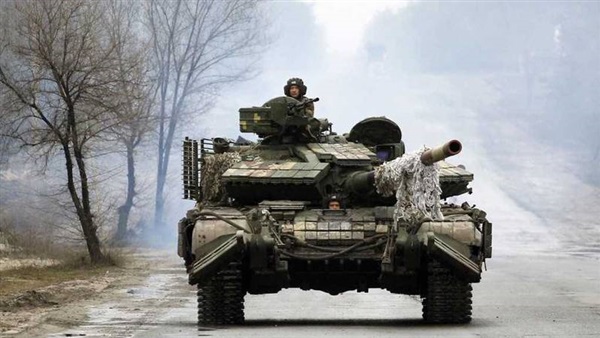 Up to 60 civilians are believed to have been killed in a Russian airstrike on a village school in eastern Ukraine as the country steels itself for a barrage of offensives to mark Moscow’s “Victory Day” parade tomorrow.

Roughly 90 people had sought refuge in the school buildings at Bilohorivka, close to the focal point of Russia’s redoubled onslaught on Donbas.

Yesterday afternoon the complex was hit by a Russian bomb, sparking a fire that raged for four hours, according to Serhiy Gaidai, governor of the Luhansk oblast.

Only 30 or so survivors have been found. “Unfortunately, the bodies of two people were found,” Gaidai wrote on Telegram, a social media app. “Thirty people were evacuated from the rubble, seven of whom were injured. Sixty people were likely to have died under the rubble of buildings.”

Since retreating from the north of Ukraine a month ago Russia has poured its forces into Donbas, where it is making slow and uneven advances against seasoned and relatively well-equipped Ukrainian regulars. Bilohorivka, on the border between the Donetsk and Luhansk oblasts, is on the edge of a pocket of Ukrainian-held territory that has borne the brunt of some of the heaviest fighting.

The area came under intense Russian bombardment over the weekend, including strikes on the nearby cities of Lysychansk and Severodonetsk.

The Ukrainians are bracing themselves for a “meatgrinder” of intense attacks as the Kremlin tries to achieve a breakthrough in time for a vast annual military parade in Moscow tomorrow, commemorating the Soviet Union’s victory over Nazi Germany.

Yesterday a Ukrainian military official said that six missiles had hit the Black Sea port of Odesa, which tops the list of targets that will be in Russia’s sights if it can conquer Donbas. Four of the rockets struck a furniture factory and two landed on a runway that had already been damaged, according to the Ukrainian authorities. It is unclear if there were any casualties.

Russian forces are still attempting to crush the last redoubt of resistance in the southern port city of Mariupol, where more than a thousand Ukrainian soldiers have been holding out in the labyrinth of tunnels beneath the Azovstal steelworks.

In a sign of Moscow’s urgent desire to secure symbolic victories, the initial plan of starving the defenders out through patient siege tactics has been abandoned and Russia has sent in ground troops.

Last night President Zelensky said the last 300 civilians had been evacuated from the facility in an operation involving the United Nations and the Red Cross.

He insisted that Ukraine and its allies would win the war, in a speech marking the Ukrainian version of Victory Day, when the country remembers its part in the defeat of the Third Reich.

“The evil has returned again — in a different form, under different slogans, but for the same purpose,” Zelensky said in a video broadcast. Likening Putin’s isolation to the last days of Adolf Hitler in a tunnel system beneath Berlin, he added: “No evil can escape responsibility. It cannot hide in a bunker.”