How Ukrainians destroyed the Moskva, pride of the Russian navy 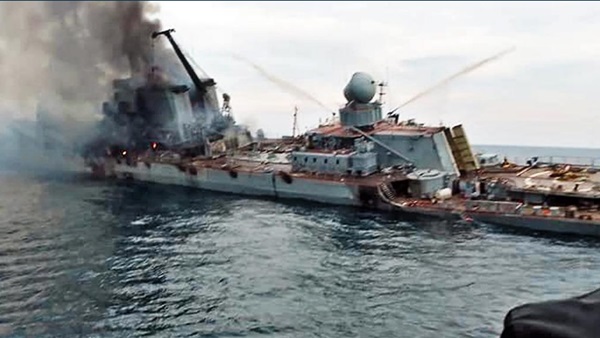 Darkness was falling over the Black Sea on April 13 when the call came through on the Pentagon secure line. Ukrainian naval drone operators, flying their craft at high altitude, thought they had spotted Russia’s flagship.

US defence officials familiar with the case said the co-ordinates were passed on to await confirmation that it was the Moskva. A US Navy P-8A Poseidon maritime surveillance aircraft was in the area. The Americans confirmed the sighting.

“The Ukrainians are able to detect and track ships in the Black Sea with their own intelligence capabilities,” a source said. “But on that occasion they reached out to the US to confirm that it was the Moskva and we confirmed it.

“We consider that intelligence we are giving is defensive in nature because the ships are close to Ukraine and pose a threat not just to the coastal cities but to the whole of Ukraine because of their long-range missiles.”

The Moskva, the largest and best-equipped cruiser in the fleet, had spent almost seven weeks wreaking havoc on Ukrainian targets hundreds of miles away with its powerful Kalibr cruise missiles.

Now it loomed less than a hundred miles from Ukraine’s sandy Black Sea coastline, providing a missile shield for landing ships that threatened the country’s largest port, Odesa, with an amphibious assault.

Across the waves and along Odesa’s beaches, where holidaymakers had been replaced by mines, bunkers and barricades against landing craft, the crew of a Ukrainian Neptune anti-ship missile system rumbled their heavy vehicles into place.

Only a year old, their missiles were yet to be tested against an enemy target. Although packed with sophisticated modern electronics, their Neptunes were an upgrade of a Soviet anti-ship missile designed in the 1980s. The crew had no idea how their new weapons would fare against high-tech, anti-missile defences.

They would soon find out. About 8pm they received their target data. A single Neptune is intended to destroy a ship but the crew prepared two to be sure. Then came the order to fire. The Neptunes roared out of their launching tubes in a flash of fire and smoke, pushing backwards the trucks that fired them.

Distracted by the drones, the 510 crew members aboard the Russian Black Sea missile cruiser Moskva had about a minute to react to the missiles headed their way at subsonic speeds.

At that point — when the ship’s radar had already missed the missiles in flight — the electronic warfare desk in the ship’s operation room would have been alerted to a signature spike as the seeker head locked on to its 12,490-tonne target. Navy experts believe they should have been able to shoot down the Ukrainian-made missiles.

Once the ship detected the missiles heading in its direction, it should have had both “soft kill” and “hard kill” options available.

Soft kill would have been the use of decoys to either confuse the targeting unit, “distract” the missile in flight to the wrong target or “seduce” the missile away from the target once its seeker head has locked on.

As a last resort, the Moskva could have engaged six short-range, close-in weapons systems that can fire 5,000 rounds a minute.

But it seems the crew never activated any of these systems. Chris Carlson, a retired US navy captain, said that video of the Moskva after the strike showed the radars “in their normal stowed position”.

He told the US Naval Institute, a military think tank: “If you look at the pictures of Moskva, when she’s just dancing around going from place to place or she’s anchored as a showboat, those directors are all facing aft every time.”

Alarm bells rang, followed by an almighty explosion as the ship was struck, with white hot shrapnel tearing through the vessel, causing further explosions as it set ammunition alight.

For the survivors, after that came the terrifying realisation that the pride of the Russian navy and symbol of its military power was sinking.

At 8.42pm the first report emerged of a missile hitting the Moskva. Ukrainians began to celebrate the symbolism of striking a ship named after the Russian capital city.

Radio chatter suggested a ship in severe distress as Russian rescue craft raced to the area. Yet the fire on the vessel was so intense there was no way to save it.

Even as crew members scrambled over the side into lifeboats, the Kremlin was denying its ship was in trouble.

Only in the early hours of April 14 did Russian media acknowledge a fire but maintained that the vessel was still seaworthy. A three-second video taken by a Russian sailor as the ship listed to one side, widely shared on social media, made clear that the ship was doomed. The official line from Moscow remains that the ship sank after an accidental fire and the Kremlin has kept the number of dead and injured a closely guarded secret.

For weeks parents of the sailors have been trying to find out what happened to their sons. Yulya Tsirova, from Crimea, believes her son Andrey, 19, died on the Moskva.

“I live in the village of Lenino in Crimea,” she said. “The day after [the sinking of the Moskva] I went to the military district in Sevastopol. A list of the disappeared had been hung up and on it were a lot of people — about 30 to be precise. After that, no one showed us any more lists. I asked them to explain what ‘disappeared without trace’ meant? Is my son dead? They said he wasn’t, he just was not serving in the armed forces any more and was not in hospital. So where is he?

“My son was a conscript. There were many conscripts on the boat. I’m sure there were about 200 to 300 of them.”

Another conscript who appears to have died on the Moskva was Leonid Savin, who worked in the ship’s kitchen and cleaned its equipment. His brother, Vladimir, got in touch with Current Time TV, a US-funded Russian news outlet with an office in Prague, to try to find out what happened to him.

He said that their parents had got in touch with his division commander, Aleksey Burgorsky, after the first reports of missiles hitting the Moskva.

The commander said at first that Savin was “alive and well”. The next day, however, he sent a message: “Your son is among those who have disappeared without trace. My condolences.”

In a desperate attempt to find his brother, Vladimir toured the hospitals and military districts of Sevastopol before concluding that “disappeared without trace” meant that he had died.

Tatyana Efremenko believes her 19-year-old son, Nikita, was also on the Moskva when it went down. Nikita was conscripted into the Russian navy in November last year.

She did not hear from Nikita during the first three weeks of the war because he had no mobile signal. She tried calling him on March 10 with no luck.

Eventually she received a letter from him saying he was at sea and he had no signal. He expressed doubts about joining the army permanently once his national service had ended and Efremenko tried to convince him not to sign a permanent contract.

Her final call with him was on April 9. After the sinking, she tried to find out about him through the Committee of Soldiers’ Mothers, a campaign organisation, with no luck. She called hospitals in Sevastopol and Moscow.

“I asked if there were wounded people who weren’t allowed to be called soldiers,” she said. “They told me no. Then the phone suddenly cut off and I couldn’t get back in touch.”

Eventually, she called the Sevastopol defence ministry. “I was told that my son had disappeared without trace. After that, I just heard: ‘The phone could not be connected.’ ”

Efremenko said she had collected information from online sources about other conscripts who appeared to have died on the Moskva. “The commanders are all saying that he disappeared without trace but they don’t say where,” she said. “Where did he disappear? Into the sea? On dry land? No one is explaining the situation and no one is saying how many people died and were injured.”

Russia has said one sailor died and 27 are missing.