Two months below the tracks in Kharkiv: ‘There’s no way I’m going above ground until this war is over’ 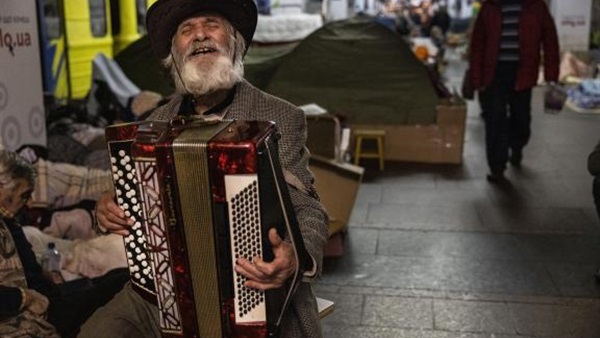 From the gloom of the underground train, a little girl in a pink sparkly jumper, a yellow bow in her hair, peeps out through the doors. Her name is Veronika and she is seven. “I like living on the train,” she says. Then she adds uncertainly, “but not very much.”

Spending night and day in a train carriage might sound like an adventure to some children but after 65 days, the attraction is wearing off for Veronika. Getting there meant fleeing the bombing of her home and leaving behind toys, friends and a pet cat called Boniface. And every so often the carriage rocks, because of explosions devastating the city above.

Veronika is one of thousands of mostly women and children living in 30 underground stations across Kharkiv, Ukraine’s second biggest city, as it is pounded relentlessly by Russian forces. A quarter of its residential buildings have been wiped out and hundreds killed.

She and her mother Natasha, who normally works in a pet shop, live in Heroiv Pratsi metro station, just a few miles from the front line and a few minutes from the northern suburb of Saltivka where smouldering ruins and blackened buildings recall scenes of the Blitz. Her father is still in the basement of their block of flats with the cat.

“There’s no place to go — it’s here or the bombs,” shrugs Natasha, 36, turning on a pocket light as Veronika snuggles up with a teddy on the seat. “I know it’s not normal but I try to keep her usual bedtimes and make it as normal as possible.”

To leave life above, walking through the shattered glass of blown-up shops and down the steps to the brown granite walls and geometric chandeliers of the Soviet-built station, is to enter a dystopian world.

Stretched out around the ticket barriers, then down the steps to the platforms and all along them, are people lying on blankets, a few lucky ones with air mattresses, some using cardboard boxes as tables.

At one point there were 2,500 people living here. Most have left but around 800 remain, many with their cats, a few with dogs, and one with a cage of colourful budgerigars.

The artificial light is glaring and the air stale. There is an endless soundtrack of coughing. Nests of wires spring from electricity sockets, powering up phones and boiling kettles.

A young boy is riding up and down on a scooter. One woman is doing leg-bicycles. Another boy in a red-striped hoodie walks back and forth, eyes empty.

On a sunny day some venture outside, to buy food or even head to their old homes for a shower if they still have water. Many, however, have never left and insist they will stay there until peace comes.

“There’s no way I am going above ground until this war is over,” says Alina, 32, who lives at the top of steps, under adverts for Scotch & Soda clothing, with her husband Aleksandr, 31, and their large grey cat Stepan. They moved there on February 27, along with Alina’s mother, after their home was shelled.

The station was so full they had to sleep on the steps but as people left they were able to move up to the entry hall. “It’s uncomfortable but better than being killed,” shrugged Aleksandr, an electrician. Like everyone there, Aleksandr and Alina spend their days trawling social media on their phones and playing with the cat. The lights never go off and many lose sense of night and day.

Volunteers bring daily hot meals and donated clothes for there is nowhere to do washing. Pastor Fyodyr Hyrtsink visits every two days with his wife Anatolina and a few helpers, trying to persuade those with children to come out and board a bus west. “Lots of people are super-afraid of being outside and super-depressed,” he said. “I tell them 25 buses have already safely left, taking people, but they think they will be killed instantly if they leave.”

News spread quickly when one family left for Kramatorsk after six weeks in the station only to be killed by a missile as they were waiting to board a train.

Driving around the city’s deserted streets, it’s not hard to understand what sent people underground. Aside from Mariupol in the south, no Ukrainian city has undergone such relentless bombardment, even though at just 20 miles from the Russian border, almost all of its residents are Russian-speakers and many have relations in Russia.

Though Kharkiv pushed out Russian forces and continues to hold off the advance, the cost has been enormous. “There hasn’t been a day of this war when we haven’t been shelled,” says Ihor Terekhov, the city’s mayor. Out of 8,000 high-rise apartment buildings, 2,500 have been destroyed, he says. The library, art museum and cathedral have been hit as well as half the schools, a kindergarten and water pumps.

Many of those remaining in the basements of blackened buildings have no water or electricity and have to risk going outside to cook on open fires.

“People have moved into the metro because it’s the safest place,” said the mayor. At the peak, he says, more than 100,000 were living in underground stations.

But life there is grim. In Heroiv Pratsi station there are just seven toilets — four male urinals, three for women, and only basins for washing. Sometimes people walk through the tunnel to the next station which has a shower, but there are long waits.

So many people crowded together like moles underground seems like a recipe for tension and there is some. Yet a strange kind of community has developed. “Our life values have completely changed being here,” says Alina. “Before we were obsessed with work and buying stuff but now I realise material things don’t matter. Look, even the animals are friends,” she says as a cat and dog rub noses.

Lots of people have jars of red tulips. They were handed out by Katya Talpa, 35, who used to manage a call centre. Her husband, Yuri, is a barber and often shaves the other men. It is forbidden for men aged 18 to 60 to leave the country. Like many younger women, Katya has stayed too. She plays with her two cats as she explains, “My husband can’t leave the country so I stay with him.”

As she talks, Yuri is cracking jokes and chopping potatoes and carrots for a stew in a slow-cooker he recently bought.

The couple are determined to keep cheerful. Katya holds up a mirror to brush her hair and keeps a bottle of perfume on a small table by the pillar where their blankets are spread.

An old man called Ivan plays mournful patriotic tunes on an accordion. Some hum along, others groan.

Announcements over the loudspeakers are not for trains but warning people not to overload the electricity. The trains have long stopped. The blue and yellow carriages parked at the platform where Natasha and Veronika live, along with four other families and a few single people, are the most sought-after living space as there is a little more privacy and no lights.

Halfway along the platform a group of women sit on camp chairs at a table with mugs of coffee and biscuits, almost like a coffee morning. Luba, 61, and her daughter Katarina, 35, gather with Tatiana, 56, and Zoya, 75, every morning. A large grey cat, Titia, purrs contentedly on the blankets. Luba is knitting a red hat.

They are joined by Katarina’s husband Andrey, 47, a security guard. The couple were evacuated from the basement of their home on March 6 by police after shelling in Saltivka left their place in flames. “We thought it would be a couple of days but now we don’t know,” he said. “We are waiting for victory. This is hellish. I miss privacy — you can never be alone here.”

“It’s like what Hitler did,” says Tatiana, a former cook. “What they are bombing are only people’s homes. What reason can they have to destroy these?

“Now because of the Russians I am having to sit here in this underground station, wearing this filthy jacket the whole time and watching my seven-month-old granddaughter grow up on the phone.”

Zoya says she stays because her only son is a volunteer in the Kharkiv defence force and she wants to be near him. “But it’s hard to sleep,” she says. “Everyone is ill. We just watch the news on the phone and take tablets.”

The station even has a resident nurse, Natalya Klemba, 56, who sits on a blanket with a blood pressure monitor surrounded by pills. She had retired because she had cancer but shortly after fleeing to the station in early March with her daughter-in-law and grandchildren, she heard people calling for assistance.

“I realised I could help. I think you can hear this is a very unhealthy place,” she says, as all around people are coughing. “There’s very little oxygen and no fresh air. There is lots of flu, diarrhoea, chest problems and Covid — eight people have been hospitalised.”

Her daughter-in-law and two grandsons had left the day before to head west but she decided to stay. “I’m glad they are going to a good place and will miss them terribly but I couldn’t go and leave all these people.”

Many have become institutionalised and refuse to leave. “Even when we take them to safe places they sometimes want to go back,” says Terekhov, the mayor.

Mykola Korepa, Ukraine’s former ombudsman for children, agrees. “Once people have been underground a few days it becomes very hard psychologically for them to leave,” he says. He now runs an organisation called Save Ukraine, rescuing children from the front lines.

Last month it took him two hours to persuade Tanya, 55, her daughter Katya Ivanova, 34, and her four-year-old daughter Vera to venture out of the station and board a bus to the relative safety of the west. They had been in the station for seven weeks.

Tanya, Katya and Vera are now in a summer camp in the foothills of the Carpathian mountains south of Lviv. “It’s fresh clean air, so good,” says Tanya. “The metro was awful, the floor was damp where we slept and smelly. It was not a place for humans. I don’t think I’ll ever get the metro again.”

Vera has developed a stutter and is now scared of loud sounds. When local volunteers held a class for her and other children and played music, she was terrified, said Tanya. “She doesn’t want to play with other kids or go outside.”

According to the mayor, around 15,000 people are still living in the underground. He himself often sleeps underground and gives interviews in a metro station.

Yet as the daily destruction continues, he is determined to look to the future and has already had two virtual meetings with the British architect Norman Foster who has offered to help plan the rebuilding. He has, he says, been reading about Churchill and how planning for rebuilding London started even during the Blitz.

Astonishingly, last Thursday, a day that 11 missiles struck the city, council workers were busily planting cheerful yellow and orange marigolds in a city square while another man was determinedly mowing the grass verges.

“It’s to show our love for the city,” shrugged Terehov. “Even after hellish shelling, shooting and bombing, people see these flowers and everything clean and it lifts their spirits.”