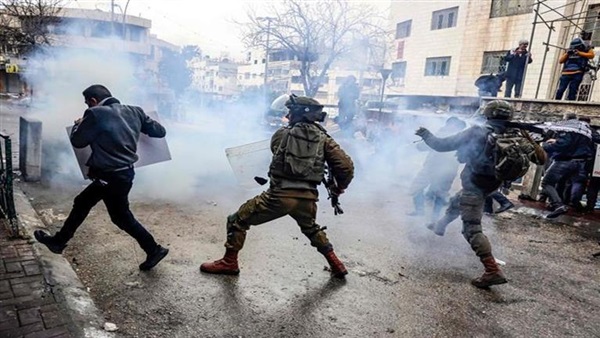 A Palestinian lawyer and a teenager have been killed on the fifth day of Israeli raids in the West Bank following deadly attacks in the Jewish state, amid heightened tensions after a religious site was vandalised.

Israel has poured in additional forces and is reinforcing its wall and fence barrier with the occupied territory after four deadly attacks claimed 14 lives in Israel, most of them civilians, in the past three weeks.

Wednesday’s deaths bring to 17 the number of Palestinian fatalities in the ongoing escalation.

The Palestinian health ministry said human rights lawyer Muhammad Hassan Muhammad Assaf, 34, “died after being shot in the chest by the Israeli occupation army during the aggression on the city of Nablus”, in the northern West Bank.

The Israeli army did not confirm its forces had shot the lawyer.

In the evening, the ministry said Israeli forces shot dead a teenager “during their aggression on Husan”, in the southern West Bank.

The army said in a statement that soldiers shot a Palestinian suspect who had “hurled a Molotov cocktail” at them, adding that troops “used live ammunition in order to stop the immediate threat”.

A community leader in Husan said the deceased was 16-year-old Qusai Hamamrah.

Hundreds of Palestinians were rioting in the area following the incident, the army said.

Violent clashes had erupted earlier in the day in Nablus, where Israeli forces were escorting a work crew that came to repair Joseph’s Tomb.

The site is sacred to Jews and was smashed in an act of vandalism last weekend.

Israeli troops racing through the city’s streets in an armoured convoy opened fire as a crowd pelted them with rocks and incendiary devices.

“Hundreds of Palestinians instigated a violent riot, burned tyres and hurled rocks and Molotov cocktails at the soldiers”, who responded with “riot dispersal means and live ammunition”, the army said.

Witnesses said Assaf was standing by the roadside, having just taken his nephews to school, when he was hit by a bullet as Israeli forces fired while pulling out of Nablus.

Assaf was mourned as a “fierce defender of his people” by his employer, the Colonisation and Wall Resistance Commission of the Ramallah-based Palestinian Authority.

After news of his death, the Palestinian prime minister, Mohammad Shtayyeh, charged that Israeli soldiers “murder for the sake of murder, with a license granted by the prime minister of the occupying state, Naftali Bennett, without the slightest regard for international law”.

Bennett has warned that Israel is now “on the offensive” and determined to arrest militant suspects.

The latest major attack Israel suffered was a shooting rampage last Thursday in Tel Aviv that claimed three lives and wounded more than a dozen more. The gunman, from Jenin, died in a shootout with Israeli forces following an all-night manhunt.

Israeli police said on Wednesday that their special forces arrested a Palestinian in Kubar and three others in Silwad – villages north of Ramallah – who were planning an attack on Israelis.

The Shin Bet internal security agency said the Kubar suspect, identified as Moath Hamed, had escaped Palestinian custody, where he was being held for his role in murdering an Israeli in 2015.

Earlier Wednesday, the Israeli army said it carried out “counterterrorist operations” in the Palestinian militant bastion of Jenin and other West Bank cities.

In the city of Tulkarem, Israeli border police said they shot and wounded “a suspect in terrorist activity” who fled special forces trying to arrest him.

Bennett had vowed on Sunday that “we will not abide such an assault on a place that is holy to us – on the eve of Passover”, the Jewish festival.

The Palestinian Red Crescent reported 31 people wounded around the Nablus site and a nearby village, including 10 hit by live rounds.

The holy site, where Jews say the Biblical patriarch Joseph is buried, is a frequent flashpoint between Israelis and Palestinians. It was partially destroyed in 2000 during a Palestinian uprising and also torched in 2015.

Palestinian authorities consider the wider site an Islamic archaeological monument where a revered cleric was buried two centuries ago.

The clashes have come during the Muslim holy month of Ramadan and ahead of the start of Passover on Friday, an overlap that can heighten tensions around sacred sites in Jerusalem’s Old City.

Last year Hamas, the Islamist group that runs the Gaza Strip, fired rockets towards Jerusalem following disturbances at the al-Aqsa Mosque, the third holiest site in Islam, setting off a devastating 11-day war.