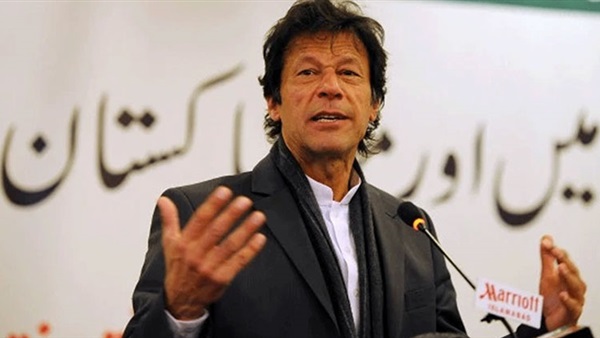 "Imran Khan on Wednesday kicked off a defiant campaign against his removal as Pakistan’s prime minister, calling on thousands of supporters to “hold regular public protests” to seek early elections.

Addressing crowds in the city of Peshawar near the border with Afghanistan, Khan set out his stall as a potentially disruptive opposition force that could challenge the new government of prime minister Shehbaz Sharif in Islamabad."

"“I will go to every city of Pakistan to mobilise my people against this government,” Khan said, adding that Pakistanis had to choose between “remaining slaves” of foreign powers, notably the US, or freedom."

"Khan’s supporters have turned out in force since the former cricket star was removed from office on Sunday in the country’s first successful vote of no confidence against a prime minister. His Pakistan Tehreek-e-Insaf (PTI) party won power in 2018 promising to end corruption and oversee sweeping reforms in the country of 220mn.

Soaring food prices had turned many voters against Khan and defections by coalition allies and members of his own party left him without a parliamentary majority.

Khan has repeatedly claimed that he was the victim of a US-backed plot following his decision to visit Moscow to meet President Vladimir Putin on the day of Russia’s invasion of Ukraine.

“I will be holding my first jalsa [public meeting] after being removed through a foreign-instigated regime change,” Khan wrote on Twitter ahead of Wednesday’s gathering. “I want all our people to come, as Pakistan was created as an independent, sovereign state not as a puppet state of foreign powers.”

Washington and Pakistan opposition leaders have strongly denied Khan’s allegations of interference, for which he has not produced substantive evidence."

"The new government has accused Khan of trying to gain public support through a narrative of foreign conspiracy rather than by tackling the harsh reality of worsening economic conditions that Pakistani households endured during his term.

“Imran Khan’s political career is far from over but he needs to learn key lessons from his underperformance in power, show humility and tolerance and not be a disruptive force if he is to make a comeback,” said Maleeha Lodhi, a former Pakistan ambassador to the US and UN.

“Populism is his chosen strategy, but that shouldn’t mean taking on every institution and showing disregard for the constitution,” she said.

"“His strategy is to widen his support on the grounds of a [foreign] conspiracy,” Rizvi said. “If he can gather large crowds during this time, then I think he will be emboldened.”

Following Wednesday’s gathering in Peshawar, Khan is due to attend similar events in the coming week in Karachi and Lahore, Pakistan’s largest and second-largest cities, respectively.

Khan had been encouraged by large crowds of supporters coming out in some of Pakistan’s big cities despite it being the holy month of Ramadan, a PTI official said.

“If people are coming out to support Imran Khan, delaying their [nightly] prayers just because they see him being pushed out unfairly, then that’s a good sign,” the PTI official said."