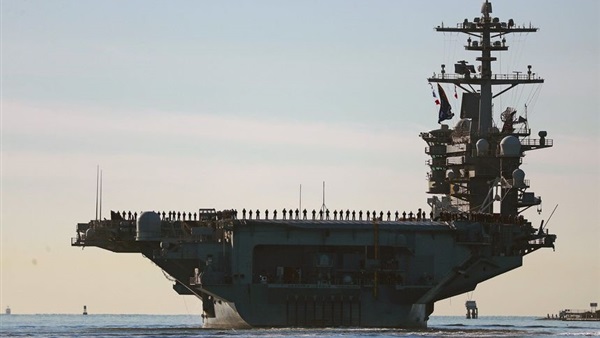 A U.S. nuclear-powered aircraft carrier has been sent to the waters between South Korea and Japan this week, a display of American naval firepower amid growing tensions over North Korea’s missile tests.

The USS Abraham Lincoln and its strike group are located in international waters off South Korea’s southeastern coast, according to local media reports.

It marks the first time such a U.S. carrier group has been deployed in the region since November 2017, a time when Washington and Pyongyang traded war threats following a flurry of major weapons tests by the Kim Jong Un regime.

The aircraft carrier will stay in the region for several days, local media reported. That period overlaps with a major North Korean holiday on Friday—the 110th anniversary of the birth of country founder Kim Il Sung. A large-scale military parade appears likely, according to satellite imagery of training grounds. U.S. officials have also expressed concern that the Kim regime, as it has done before, could carry out a nuclear or missile test as part of the celebrations.

Deploying the USS Abraham Lincoln—a more than 1,000-feet-long warship—as a show of force could prove counterproductive, given how tensions are already rising on the Korean Peninsula and how the Kim regime has grown more irritable of late, said Van Jackson, who worked at the Pentagon during the Obama administration on Northeast Asia issues.

“The message we send to North Korea is that it needs more and better nukes,” Mr. Jackson said. “In what world are we made more secure by making North Korea less secure?”

But the U.S. Naval Institute, which operates a fleet-and-marine tracker based on U.S. Navy and public data, lists the USS Abraham Lincoln as currently being in the waters between South Korea and Japan.

Pyongyang has dialed up tensions following a March 24 test launch of its first full-range intercontinental ballistic missile in more than four years. Kim Jong Un has sworn to keep bolstering his country’s nuclear deterrent and grown more bellicose in his criticisms of the U.S.

In response to the Kim regime’s most-recent ICBM test, South Korea conducted rare military drills of its own, displaying American F-35 stealth jet fighters. The U.S. has also cited North Korea’s missile tests as it conducted aircraft-carrier drills in the Yellow Sea and intensified artillery drills at an air base.

South Korea last month elected a conservative president who promises to take a tougher line with the Kim regime than the current left-leaning administration that advocates for engagement.

On Tuesday, Seoul and Washington began preliminary military drills ahead of annual joint exercises expected later this month, which North Korea has criticized as a threat to its sovereignty. In recent years, the combined military exercises have been largely computer simulated without field training. But Mr. Yoon, who takes office next month, stressed the importance of combined exercises during a recent visit to a U.S. military base located about 45 miles south of Seoul.

“North Korea recently broke the moratorium on long-range missile testing and this is a reaction to ongoing provocations but also a step away from peace talks,” said Moon Jang-ryul, a former South Korean policy adviser. “Yoon has made clear he will counter North Korea’s threat with stronger U.S.-South Korea relations.”