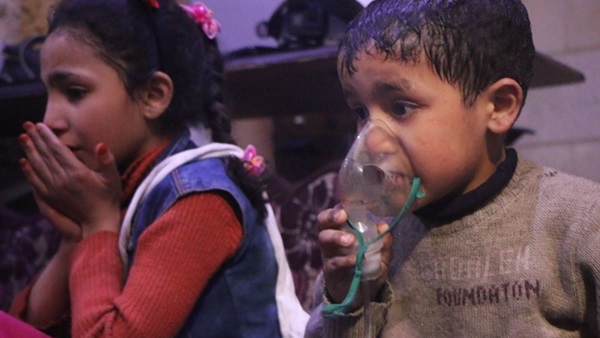 Gas attack victims from Syria have called for justice as those accountable remain unpunished, five years after the deadly chemical attacks.

Abdel Hamid al-Youssef said 25 members of his family, including his wife and infant twins, were killed when poison gas was dropped on their home town Khan Sheikhoun, Syria in 2017.

A UN-backed inquiry concluded the chemical attack was launched by the Syrian state.

But as the attack reaches its five year anniversary, survivors and human rights campaigners say the failure to hold anyone accountable for chemical attacks in Syria could encourage further use of such banned weapons.

“In seconds, everything was erased. Life was completely erased,” Mr al-Youssef, 33, said of the attack on his home town.

The bereaved husband and father added: “There were rooms of martyrs. I didn’t know which one to take: my brother, my nephew, my children, my wife.”

The bombardment, in Syria’s rebel-held northwest, killed at least 90 people, 30 of them children, according to Human Rights Watch.

A report by an investigative mechanism established by the United Nations and the Organisation for the Prohibition of Chemical Weapons (OPCW) said it was “confident that the Syrian Arab Republic is responsible for the release of sarin at Khan Shaykhun on 4 April 2017”.

“There is no deterrent for Russia,” said Youssef, who wants Syrian President Bashar al-Assad to be held to account. “Until this day, the criminal is free.”

Abdel Hamid al-Youssef, shows a picture on his phone of his infant twins and his brother who he says were killed when poison gas was dropped on their home town

Assad’s government has denied using chemical weapons in the war, which started as an uprising against his rule and has killed at least 350,000 people. Syria signed international conventions outlawing the use of such weapons in 2013.

The details of the Khan Sheikhoun attack are seared into Youssef’s memory, starting with the noise of warplanes that launched several air strikes on the town beginning at 6.30am.

Trying to get his family to safety, Youssef headed towards his parents’ home. His wife went ahead as he stopped to aid a neighbour who was was screaming for help.

Youssef said he helped load casualties into a pickup truck. Some were foaming at the mouth.

Youssef lost consciousness as he tried to help his niece. He awoke in hospital hours later, only realising the scale of the calamity when he returned home that afternoon.

“There were rooms of martyrs. I didn’t know which one to take: my brother, my nephew, my children, my wife,” said Youssef. “They put them in shrouds. We took them to the cemetery and buried them there.”

US president Donald Trump’s administration responded by firing 59 cruise missiles at the air strip from which it said the attack was launched.

By the time of the strike, Syrian-allies Russia and China had already vetoed efforts at the United Nations to open an investigation by the International Criminal Court (ICC) into war crimes and crimes against humanity in Syria.

Additionally, Russia - which threw its military support behind Bashar al-Assad in 2015 - said the chemicals belonged to Syrian rebels, not the government.

The anniversary comes as the US and other countries warn Russia could deploy chemical weapons in Ukraine.

Around 150 cases of alleged uses of chemical weapons in Syria are being investigated by the OPCW and there have been 20 confirmed uses of such weapons, a source told Reuters.

Hamid Ketteny, a civil defence rescue worker who says he carried the bodies of six children killed in Khan Sheikhoun, said he helped document the massacre.

“The silence of the international community towards the crimes previously committed here in Syria has allowed Russia and others to commit crimes in the rest of the world, and currently in Ukraine,” he said.

Nidal Shikhani, director general of the Chemical Violations Documentation Centre of Syria, said he remained optimistic that perpetrators would be held to account, noting the large amounts of evidence gathered by his group and others.

His organisation had received requests for evidence from prosecutors on five cases in three European countries, most recently in September.

“These crimes do not fade with the passing of time,” he said.