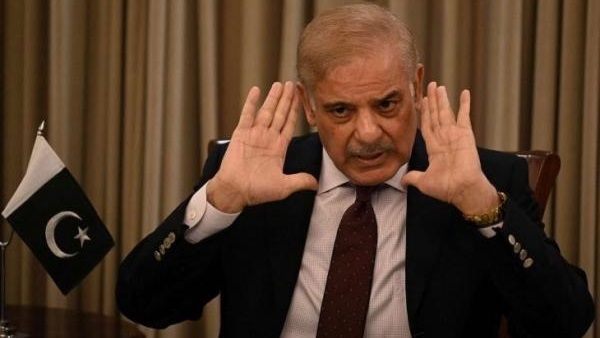 Sharif, 70, took office after a historic and turbulent week in Pakistani politics in which the former prime minister Imran Khan was toppled by a no-confidence vote, which he had gone to great lengths to stop, and the opposition coalition took power.

On Monday afternoon, Sharif was elected by lawmakers to become the next prime minister, with 174 votes in the 342-seat parliament. Speaking after the vote, Sharif said: “Truth has won.”

All the members of Khan’s Pakistan Tehreek-e-Insaf (PTI) party boycotted the parliamentary vote and did not put forward their own candidate. Khan was not present in the chamber when the vote took place. Later on Monday night, President Arif Alvi, a member of Khan’s party, missed the swearing-in, which was held at his residence, saying he was unwell.

Sharif is president of the centrist Pakistan Muslim League-Nawaz (PML-N) party and since 2018 has been leader of the opposition coalition, which also includes the Pakistan Peoples Party (PPP). Prior to Khan’s election in 2017, the two parties had dominated politics in the country for more than a decade. They came together in an alliance with the smaller conservative Jamiat-ulema-e-Islam (F) group, with the joint purpose of removing Khan from office.

Sharif was one of several key opposition leaders jailed under Khan and he spent eight months behind bars on charges of money laundering before being granted bail in April 2021.

Khan was said to be vehemently against Sharif being the man who would take over as prime minister and reportedly told the opposition coalition this week he would agree to the vote of no confidence as long as another opposition leader was put forward as the candidate, an offer that was turned down.

Khan had also sought assurances from the opposition that neither he nor his allies from the PTI would face the threat of imprisonment once they were removed from power.

Sharif has long stood in the shadow of his older brother Nawaz, who served as Pakistan’s prime minister three separate times between 1990 and 2017 before he was removed from office and jailed on charges of corruption. Nawaz has been in exile in London since 2019 after he was given bail on medical grounds for treatment in the UK and never returned.

Sharif first entered politics in 1988, and was the longest-serving chief minister of Punjab, Pakistan’s most populous state, where he is credited with implementing an ambitious development agenda.

His appointment as prime minister comes after a series of dramatic developments, which led to the toppling of Khan from office on Saturday.

Last month the opposition coalition, led by Sharif, tabled a no-confidence vote against Khan in parliament, accusing him of economic mismanagement. After several members of the ruling coalition defected to the opposition and it became apparent that Khan would probably be removed, the prime minister took several steps to prevent the vote happening, including dissolving parliament last weekend and calling for fresh elections.

Four days later the move was reversed by the supreme court, which ruled Khan had violated the constitution and ordered for the vote to go ahead on Saturday. After a turbulent buildup, in which Khan threatened the opposition with lawsuits and the imposition of martial law, the vote was finally held minutes before the midnight deadline and Khan became the first prime minister in Pakistan’s history to be toppled by a vote of no confidence.

The former prime minister vowed it was not the end of his political career. On Sunday night, thousands took to the streets in cities across the country to protest against his removal and Khan is expected to stand in the next elections, likely to be called before the end of the year.