Russian troops ‘walking away’ from Chernobyl as Putin’s forces reposition, US says 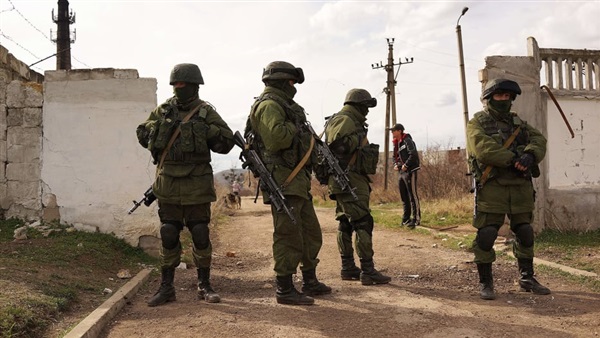 Russia’s troops have begun withdrawing from Ukraine’s Chernobyl nuclear site in Ukraine as Vladimir Putin’s force resposition, according to reports.

A US official told AFP news agency Russian soldiers were “walking away from the Chernobyl facility and moving into Belarus”.

"We think that they are leaving, I can't tell you that they're all gone,” they added.

Russian troops seized control of the Chernobyl site, where radioactive waste is still stored, on the first day of their invasion of Ukraine on 24 February.

Staff at the former nuclear facility have allegedly been held hostage and forced to work at gunpoint by Putin’s forces, who are said to have kicked up clouds of radioactive dust while

A US official, speaking on the condition of anonymity, said some Russian troops were leaving from near the Chernobyl power station, but that it was not clear if the troops leaving were departing the exclusion zone around the plant or the surrounding towns.

Earlier, Ukrainian deputy PM Iryna Vereshchuk said Russian forces occupying the defunct Chernobyl nuclear power station must withdraw from the area after defence forces warned that there was a risk of weapon fire causing an explosion at the site.

She said in a video posted to Telegram on Wednesday: “We demand that the UN Security Council immediately take measures to demilitarise the Chernobyl exclusion zone and introduce a special UN mission there to eliminate the risk of the repeat of a nuclear catastrophe.”

Ukrainian staff have continued to manage the Chernobyl site after Russian forces took control of the plant on 24 February, the day Vladimir Putin launched his invasion of Ukraine.

On Tuesday, the head of the International Atomic Energy Agency (IAEA), Rafael Grossi, traveled to Ukraine for talks with senior government officials on the delivery of “urgent technical assistance” to ensure the safety of the country’s nuclear facilities.

Mr Grossi said in a statement: “We can’t afford to lose any more time. This conflict is already causing unimaginable human suffering and destruction. The IAEA’s expertise and capabilities are needed to prevent it from also leading to a nuclear accident.”

Russia has also started to reposition almost 20 per cent of its forces that had been placed around the Kyiv, the US said on Wednesday as troops attacked the capital’s outskirts with air and ground strikes.

But Pentagon spokesman John Kirby warned that Moscow was expected to order the refitting and resupplying of the troops for redeployment, rather than return them to Russia. Some of the soldiers may have already moved into Belarus, he said.

“They are leaving Kyiv and heading more towards the north, away from the city,” Mr Kirby told a news conference.

While Kyiv has been bombarded, the besieged city Chernihiv, in northern Ukraine, has also been under attack.

It comes after Russia yesterday vowed to scale down its operations in both cities, which the West dismissed as a ruse for Putin’s troops to regroup and to potentially save face after having suffered heavy losses and setbacks during the invasion.

Some troops have also left areas around Chernihiv and Sumy, which are situated close to Kyiv in northern Ukraine.

During the press conference, Mr Kirby also said that Russian contractor Wagner Group had deployed about 1,000 mercenary fighters into the Donbas region of eastern Ukraine, which Moscow has declared a priority in its alleged scaling-back of military operations.

Putin has said, in the past, that Wagner and other private groups neither represent or are funded by the Russian state, though he says they have a right to operate provided they do not break Russian law.

Last year, the European Union imposed sanctions on Wagner – accusing it of fuelling violence, looting natural resources and destabilising countries around the world.

Meanwhile, Ukrainian president Volodymr Zelensky said his forces have been preparing to defend against new attacks by Russia in Donbas.

Peace talks have continued in Turkey “but for the moment there are just words, nothing concrete”, he said in a televised speech.