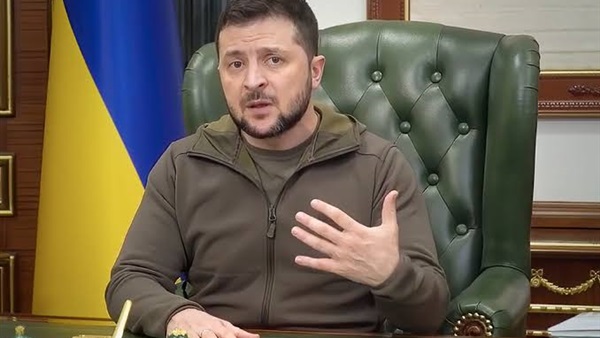 President Zelensky has warned that “positive signals” in negotiations with the Kremlin would “not silence the explosion of Russian shells” after the first signs of progress in peace talks.

In a late-night address the Ukrainian leader urged his people to “not lose vigilance” against those “who continue to fight for our destruction” after Kremlin negotiators promised a scale-back in Russian operations around Kyiv and Chernihiv.

Zelensky struck a cautionary tone even as he said that Ukraine would press ahead with negotiations after talks in Turkey produced the first signs of a possible breakthrough. The White House said “no one should be fooled” by the Kremlin’s words as heavy explosions were heard in Kyiv overnight.

Other key developments:
• Talks will resume in Istanbul today after Ukraine urged its team not to eat, drink or touch anything in response to reports that Roman Abramovich and others were poisoned.

Russia said it would “drastically reduce hostilities” against Kyiv and Chernihiv in the north, while Ukraine indicated it could drop its goal of joining Nato in return for security guarantees and pursuing EU membership.

“The enemy is still in our territory. The shelling of our cities continues. Mariupol is blocked. Missile and airstrikes do not stop. This is the reality. These are the facts.”

Zelensky rejected any talk about lifting sanctions in response to Russian offers “until the war is over, until we get back what’s ours and until we restore justice”. He said: “On the contrary, sanctions must be strengthened.”

According to British intelligence, Russia is planning to increase its “mass artillery and missile strikes” to compensate for the withdrawal of ground forces around Kyiv and Chernihiv. Russian forces had been forced to pull back to Belarus and Russia because of heavy losses, the Ministry of Defence said in an update on the war.

It added: “Such activity is placing further pressure on Russia’s already strained logistics and demonstrates the difficulties Russia is having reorganising its units in forward areas within Ukraine. Russia will likely continue to compensate for its reduced ground manoeuvre capability through mass artillery and missile strikes.

“Russia’s stated focus on an offensive in Donetsk and Luhansk is likely a tacit admission that it is struggling to sustain more than one significant axis of advance.”

Kyiv and western governments expect Moscow to intensify its offensive in Ukraine’s east and south, even if they are forced to ease operations on other fronts because of fierce resistance, battlefield blunders and stalled supplies.

“There are indications that the Russian forces are regrouping to focus their efforts on eastern Ukraine,” the Ukrainian general staff said late on Tuesday. At the same time, the so-called ‘withdrawal of troops’ is most likely a rotation of individual units and is aimed at misleading the Ukrainian military leadership.”

Kate Bedingfield, White House communication director, underscored doubts about Russia’s offer and motives. The US views any movement of Russian forces as “a redeployment, not a withdrawal” and “no one should be fooled”, she saidVideo unable

Ben Wallace, the defence secretary, said Russia was moving forces to save face. “They must think we were born yesterday,” he said. Boris Johnson added: “We will judge Putin and his regime by his actions and not by his words. We don’t want to see anything less than a complete withdrawal of Russian forces.”

Russia said that its promise to reduce operations around Kyiv and Chernihiv was not a ceasefire. Vladimir Medinsky, the lead negotiator, said there was still “a long way to go” before a deal with Ukraine.

Kyiv’s deputy mayor said that Tuesday night passed relatively quietly, with shelling only outside the city.

The World Food Programme, which gets half of its grain supplies from Ukraine, has predicted “a catastrophe on top of a catastrophe in the months ahead”.

David Beasley, its head, told the UN that war had turned “the breadbasket of the world to breadlines”. He told the UN security council that “the farmers are on the frontlines” in Ukraine and that the disruption to agriculture could have devastating knock-on effects.

The UN food agency is cutting rations in crisis zones, notably in Yemen, as a result of the war.

“If we end the conflict, address the needs, we can avoid famine, destabilization of nations and mass migration,” Beasley said. “But if we don’t, the world will pay a mighty price and the last thing we want to do as the World Food Programme is taking food from hungry children to give to starving children.”