Iraq builds wall on Syrian border to keep out Isis 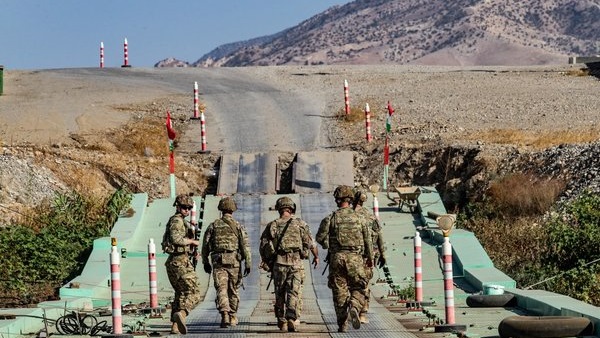 Iraq is building a wall on its border with Syria to keep out Isis as the militants intensify their cross-border attacks.

The country shares a 370-mile border with Syria and plans to build the wall on parts of the stretch inhabited by Isis fighters on the other side.

A senior Iraqi military officer, speaking on condition of anonymity, told the news agency AFP that a seven-mile barrier about 11ft high had already been built in Nineveh province, in the Sinjar area of northwestern Iraq, in the first stage of construction. It is not clear how long the wall will eventually run for.

According to the Syrian Observatory for Human Rights, work on the wall has been carried out near the town of al-Shaddadi, in the south of Hasakah province.

“To my knowledge I think the border strip between Anbar governorate and Syria could be the location where the wall will be built,” Dhia al-Asadi, an Iraqi academic and former parliamentarian, told The Times.

Colin Clarke, director of research at the Soufan Group, a security and intelligence consultancy, said he doubted that a wall would be of much use. “It will help with cross-border movement back and forth between Iraq and Syria, but it will do nothing to deal with the ideology,” he said.

Yesterday two Israeli police officers were killed and five civilians wounded when two Isis militants from the Arab-Israeli town of Umm al-Fahm opened fire on passengers waiting at a bus stop in the Israeli coastal city of Hadera.

The pair were armed with an M-16 rifle and a handgun. A group of off-duty police officers emerged from a nearby restaurant to return fire, killing them both. The terrorists had recorded a video in advance proclaiming their allegiance to Isis.

The group claimed responsibility and released a statement on its propaganda website. “Two members of the Jewish police force were killed and others were injured in an immersive commando attack,” it said, adding that at least ten people were wounded.

Last week a Bedouin citizen of Israel ran over and killed four civilians in the southern city of Beer Sheva.

Israel has been on high alert as it hosts a meeting between several Arab foreign ministers and Antony Blinken, the US secretary of state. Military units in the occupied West Bank have been reinforced with four battalions and an additional six companies of paramilitary Border-Police have been deployed within the country.

Islamic State has become more active in recent months, attempting a prison break in northeastern Syria and killing 11 Iraqi soldiers in their sleep in Diyala province.