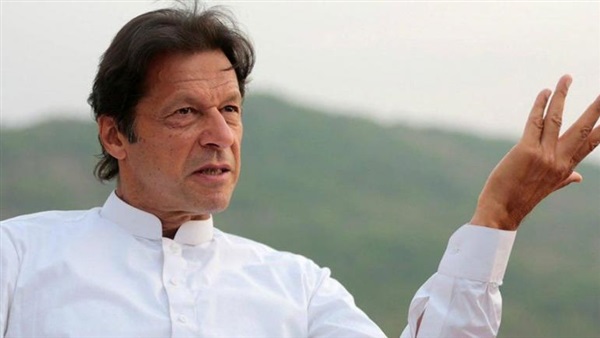 Pakistan's prime minister has claimed he is the victim of foreign powers plotting to oust him, as he tried to rally supporters in the face of a critical no confidence vote.

Imran Khan faces the toughest political battle of his tenure after a string of defections removed his parliamentary majority.

The country of 220 million on Monday moved closer to political turmoil when the national assembly agreed to take up an opposition no confidence motion and vote within seven days.

“The prime minister ceases to hold his office after he has lost the confidence of this house,” opposition leader Shehbaz Sharif told the assembly.

Mr Khan, the former Test cricketer, had earlier told a rally of his ruling Pakistan Tehreek-e-Insaf (PTI) party that he was the victim of a “foreign conspiracy” aimed at dislodging his government and that “funding was being channelled into Pakistan from abroad”.

He said: “We have been threatened in writing but we will not compromise on national interests.”

The 69-year-old gave no details of the conspiracy however. Political analysts and his opponents say his woes are instead because he has lost the support of the country's powerful generals. The military has either ruled the country directly or pulled strings behind the scenes for much of Pakistan's history.

Mr Khan has also been accused of mismanaging the economy and failing to curb soaring inflation, which is causing deep economic pain to many of his supporters.

More than a dozen defections from Mr Khan's party and desertion by coalition partners have left him short of the 172 vote majority needed to hold on to power.

Yet with a week expected until the vote takes place, there is still plenty of time for frantic horse-trading for Mr Khan to win back support.

Sumedha Dasgupta, senior Asia analyst at the Economist Intelligence Unit, said he still forecast that Mr Khan would survive, but said “there are significant risks surrounding the outcome, including the possible involvement of the military”.

He said: “The ousting of Mr Khan would be likely to lead to some form of caretaker government, ahead of the national elections in 2023, and potential military involvement.”

Mr Khan was elected in 2018 promising to sweep away decades of entrenched corruption and cronyism that he blamed on Pakistan's two major political parties.

But the opposition has accused him of having been put in power by the generals and of using their support to pursue a political witch hunt against his opponents.

Meanwhile the electorate has faced crippling price hikes and a feeble rupee.