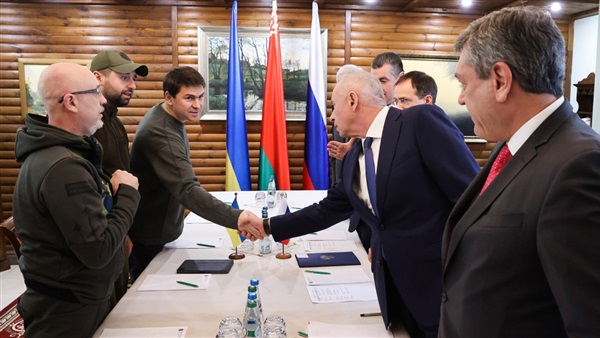 Ukraine said it is ready to declare neutrality and offer security guarantees to Russia, including keeping the country nuclear-free if Moscow withdraws its troops, as both sides prepared to begin direct talks in Turkey on Tuesday.

Negotiating teams have arrived in Istanbul for the first face-to-face talks in more than a fortnight between Kyiv and Moscow, although expectations remain low of any significant breakthrough.

Ukraine’s president Volodymyr Zelensky said his side was prepared to offer guarantees to Russia and was looking for peace “without delay”.

“Security guarantees and neutrality, the non-nuclear status of our state – we’re ready to do that. That’s the most important point... they started the war because of it,” he said in an interview with Russian journalists.

The Ukrainian leader has suggested as much before, but rarely so forcefully, and the latest remarks could provide fresh momentum for Tuesday’s talks.

Ukraine’s priorities would be, he said, “sovereignty and territorial integrity”.

Zelensky said one possible compromise could see Russia pull back its troops to areas where they had been before the invasion started on 24 February.

“I realise that it’s impossible to force Russia to fully leave the territory. It could lead to World War Three. I understand completely. I’m fully aware of it,” he said. “That is why I’m saying, yes, this is a compromise: Go back to where it all started and then we’ll try to resolve the issue of Donbas, the complex issue of Donbas.”

He added: “That’s why I’m saying this is a compromise. Go back to where this all started and then we’ll try to solve the difficult Donbas issue.”

“So we meet, we make a deal, and that’s enough – we sign a deal, stamp it, or sign it in blood. That’s enough to start the troop withdrawal process. The troops must be withdrawn, everyone signs the guarantees, and that’s it,” he said.

President Zelensky also called on Vladimir Putin to be directly involved in the talks and meet him face-to-face.

“We must come to an agreement with the president of the Russian Federation, and in order to reach an agreement, he needs to get out of there on his own feet.. and come to meet me.”

His advisor, Alexander Rodnyansky, told the BBC that Ukraine was, however, unwilling to give up territory.

“If you ask the people who live in these areas, they wouldn’t want to live in Russia,” said Mr Rodnyansky. “How can we leave them? Let alone the whole idea of slicing up our country.”

Russia’s foreign minister said that the talks could only begin after the key elements of a potential deal are negotiated. Sergei Lavrov said that “the meeting is necessary once we have clarity regarding solutions on all key issues”.

Speaking in an interview with Serbian media, Lavrov alleged that Ukraine only want to “imitate talks” while Russia needs specific results that would be secured by the countries’ leaders.

The war is well into its fifth week and has so far caused the deaths of thousands and forced some 10 million people from their homes, many fleeing Ukraine altogether.

On the ground on Monday, the situation continued to deteriorate in the besieged city of Mariupol.

Officials said up to 200,000 people were still trapped in the city which has been obliterated after weeks of shooting and shelling by Russian forces.

Supplies were increasingly scarce, said one resident who had fled. Alina Beskrovna, who made it across the border to Poland, said desperate people were melting snow for water and cooking on open fires “under shelling and bombs just because if you don’t, you will have nothing to eat”.

“There is no medicine. A lot of people are just, I think, starving to death in their apartments right now with no help,” she said. “It’s a mass murder that’s happening at the hands of the Russians.”

Ukraine estimated on Monday that the war had cost the country more than £430bn in terms of destroyed infrastructure.

On the ground, Ukrainian forces claimed to have retaken the town of Irpin, close to Kyiv, though there was no independent confirmation. Kyiv also said it would investigate claims that Russian troops had been tortured after videos on social media apparently being shot.

On the diplomatic front, the foreign secretary Liz Truss said Putin “must fail in Ukraine” and said Russia was using “abhorrent tactics” by abducting Ukrainian politicians, activists and journalists.

Germany’s energy minister Robert Habeck said the G7 had rejected a Russian demand that some countries pay rubles for its natural gas exports. Economists said that demand appeared designed to try to support the Russian currency, which is under pressure from Western sanctions imposed in the wake of the invasion.

In Moscow, Russia’s top independent newspaper suspended its online and print operations after a warning from the country’s authorities.

Novaya Gazeta announced the decision on Monday, saying it would resume its investigative work after the war in Ukraine ends.