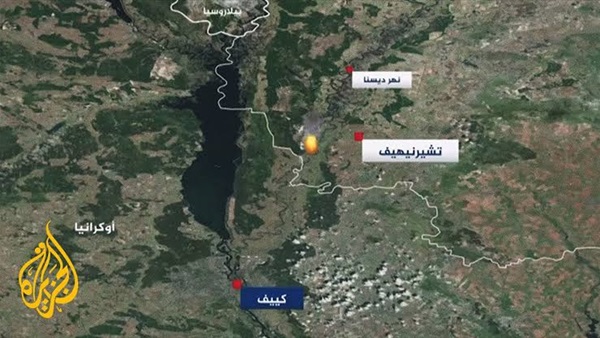 Russia wants to split Ukraine into two, just like North and South Korea, senior military intelligence officials in Kyiv said on Sunday, and vowed “total” guerrilla warfare to prevent any carve-up of the country.

The warnings came just as the leader of a separatist region in eastern Ukraine says he wants to hold a referendum on joining Russia.

Leonid Pasechnik, head of the self-proclaimed Luhansk People’s Republic, said it could hold a vote “in the nearest time”, asking voters whether they agree in making the region part of Russia.

Russia has supported the separatist rebels in Luhansk and the neighbouring Donetsk regions since an insurgency erupted there in 2014, shortly after Moscow’s annexation of the Crimean Peninsula.

And just before the invasion of Ukraine on 24 February, Moscow recognised their independence.

Crimeans voted overwhelmingly to break with Ukraine and join Russia, a vote that much of the world refused to recognise.

In response, Kyrylo Budanov, the head of Ukrainian military intelligence, said Moscow was trying to divide Ukraine in half.

“In fact, it is an attempt to create North and South Korea in Ukraine,” said Budanov. He predicted Ukraine’s army would push back Russian forces.

“In addition, the season of a total Ukrainian guerrilla safari will soon begin. Then there will be one relevant scenario left for the Russians: how to survive,” he said.

“All fake referendums in the temporarily occupied territories are null and void and will have no legal validity,” Oleg Nikolenko told Reuters.

On Friday, Russian military leaders said they would focus their war efforts on wresting Ukraine’s eastern Donbas region from Ukrainian control, in an apparent shift of tactics.

In ongoing talks with Ukraine, Moscow has also urged it to acknowledge Russia’s sovereignty over Crimea and the independence of the Donetsk and Luhansk regions. Pasechnik’s statement could herald a shift in the Russian position.

Meanwhile, Ukrainian president Volodymyr Zelensky has accused the west of lacking courage and made a plea for fighter jets and tanks to sustain a defence in a conflict that has ground into a war of attrition.

Mr Zelensky lashed out at the west’s “ping-pong about who and how should hand over jets and other defensive weapons to us” while Russian missile attacks kill and trap civilians.

“I’ve talked to the defenders of Mariupol today. I’m in constant contact with them. Their determination, heroism and firmness are astonishing,” Mr Zelensky said in a video address early on Sunday, referring to the besieged southern city that has suffered some of the war’s greatest deprivations and horrors.

“If only those who have been thinking for 31 days on how to hand over dozens of jets and tanks had one per cent of their courage.”

Russia’s invasion of Ukraine has stalled in many areas, faltering in the face of Ukrainian resistance bolstered by weapons from the UK, US and other western allies.

Western military aid has so far not included fighter jets. A proposal to transfer Polish planes to Ukraine via the US was scrapped amid Nato concerns about getting drawn into conflict with Russia.

“So who is in charge of the Euro-Atlantic community? Is it still Moscow, thanks to its scare tactics?” Mr Zelensky asked. “Our partners must step up their aid to Ukraine.”

The UK Ministry of Defence said on Sunday that the battlefield across northern Ukraine remains largely static as local counterattacks hamper Russian attempts to reorganise their forces.

The MoD said Russian troops looked to be trying to encircle Ukrainian forces directly facing the separatist regions in the country’s east.

He said another strike with sea-launched missiles destroyed a depot with air defence missiles in Plesetske, just west of Ukraine’s capital Kyiv.

The strikes came as Mr Biden wrapped up a visit to Poland, where he met Ukraine’s foreign and defence ministers, visited US troops and saw refugees from the war.

Before leaving, he delivered a forceful condemnation of Russian president Vladimir Putin, saying: “For God’s sake, this man cannot remain in power.”

The White House clarified that he was not calling for an immediate change in government in Moscow.

US secretary of state Antony Blinken said on Sunday that Washington had no strategy of regime change and that Biden had simply meant Putin could not be “empowered to wage war” against Ukraine or anywhere else.

Kremlin spokesman Dmitry Peskov said Russia’s future was “not for Biden to decide”.

“This speech – and the passages which concern Russia – is astounding, to use polite words,” he added. “He doesn’t understand that the world is not limited to the United States and most of Europe.”

French president Emmanuel Macron tried to distance himself from Biden’s comments. “I wouldn’t use this type of wording because I continue to hold discussions with president Putin,” he told the France 3 TV channel.

France’s foreign minister Jean-Yves Le Drian warned on Sunday that the besieged Ukrainian city of Mariupol is becoming a “second Aleppo” and that Russia’s “siege warfare” against cities should induce “collective guilt”.