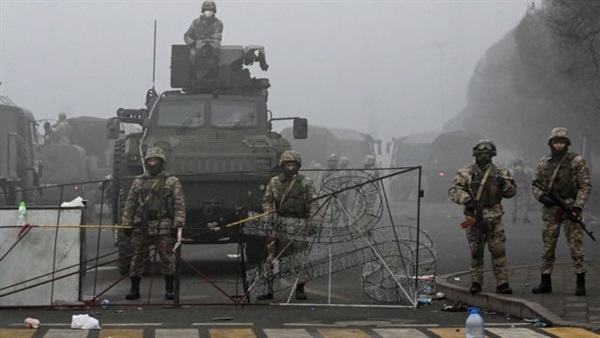 Mass protests in Kazakhstan over an increase in fuel prices have prompted an alliance of former Soviet states to send troops to help support the country’s president after the government of the Central Asian nation resigned and the leader imposed a state of emergency.

The Collective Security Treaty Organization, a Russian-led intergovernmental military alliance, would send peacekeeping forces to Kazakhstan “in view of the threat to national security…caused [among other things] by outside interference,” Armenia’s Prime Minister Nikol Pashinyan, the chair of the alliance’s Collective Security Council, wrote Thursday in a statement on Facebook that was also posted on the Kremlin’s website.

The deployment would be “for a limited period of time in order to stabilize and normalize the situation in this country,” Mr. Pashinyan said.

The announcement came after Kazakh President Kassym-Jomart Tokayev said Wednesday that he had sought assistance from the CSTO to help overcome what he described as terrorist threat.

“Given the fact that we are having to deal with international terrorist groups, which were thoroughly trained abroad, their attack on Kazakhstan can and should be regarded as an act of aggression,” he said in a statement carried on Kazakh state television.

The unrest, which at times has turned violent and threatens to destabilize the oil-rich nation, erupted Sunday in Kazakhstan’s western Mangistau region after the government lifted caps on prices for liquefied petroleum gas, the main fuel for cars, causing prices to double. Demonstrations spread to several areas across the country, including Almaty, the country’s largest city.

Mr. Tokayev has declared a two-week curfew in Mangistau region and in Almaty. The restrictions include a ban on mass gatherings and limitations on movement.

On Wednesday, he appealed to his compatriots “to show prudence and not to succumb to internal and external provocations, the euphoria of rallies and permissiveness,” in a statement published on his website Wednesday.

“Calls to attack premises of civilian and military agencies are absolutely illegal. This is a crime and legal punishment may follow,” he said.

Mr. Tokayev assured citizens that the “power will not fall,” adding that “we need mutual trust and dialogue rather than conflict.”

He has installed an acting prime minister and said that authorities would reduce fuel prices to ensure stability.

Video from Tuesday and Wednesday posted on social media showed cars set ablaze and police deploying tear gas as crowds swarmed the city center and tried to storm some government buildings. On Wednesday, there were reports by local Kazakh media and on the Telegram messenger platform of gunfire and the sound of stun grenades. There were also local media reports of fires at the presidential residence and mayor’s office in Almaty.

In a statement published on Telegram, the head of Almaty’s police department, Kanat Taymerdenov, urged residents to remain at home and abide by the curfew rules, which he described as “measures taken to suppress pogroms, looting and extremism.”

Mr. Taymerdenov said that, as a result of illegal actions of provocateurs, more than 120 vehicles were burned, including 33 police cars, ambulances and firetrucks. Dozens of businesses were destroyed and more than 500 civilians suffered physical violence, he said.

“Our main goal is to prevent further escalation of violence and radicalism,” he added.

The situation continued to escalate into the evening on Wednesday as the government shut down access or disrupted connection to many websites and social-media platforms.

The news agency Orda.kz, which bills itself as a new independent media in Kazakhstan, reported on Telegram that the airport of Almaty was shut down after being seized by protesters.

Mr. Tokayev said on Kazakh state television channel Khabar 24 that several people had been left dead and injured as a result of the unrest in Almaty, according to Interfax, reporting from the Kazakh capital of Nur-Sultan.

“There are dead and injured, crowds of disruptive elements are beating up servicemen and abusing them, parading them naked through the streets, attacking women and looting shops,” Mr. Tokayev was cited as saying. “The situation is threatening the safety of all residents of Almaty. And this must not be tolerated. Tensions are also running high in several other centers,” he said.

Mr. Tokayev accused the protesters of being financially-motivated coup plotters and he vowed not to flee the country.

“No matter what, I will be in the capital,” Interfax cited him as saying in the television statement. “This is my constitutional duty, to be with my people. Together we will overcome this dark moment in the history of Kazakhstan and emerge stronger,” he said.

Mr. Tokayev, who was previously prime minister and speaker of the senate, took office in June 2019 after being tapped to succeed longtime President Nursultan Nazarbayev, who had ruled Kazakhstan since the breakup of the Soviet Union in 1991 and resigned in March 2019, sparking an unprecedented political transition.

Local critics said Mr. Tokayev’s election was undemocratic because other potential candidates weren’t given a fair shot. Many Kazakhs, who felt they increasingly had been marginalized from decision-making, took to the streets in protests that are still relatively rare in Kazakhstan.

Mr. Tokayev promised to listen to grievances by establishing a forum to allow those unhappy with the country’s political system and socioeconomic issues to be heard.

But some political analysts have said that, while the government has had ideas about how to transform the country, it hasn’t always fully implemented those plans into everyday life, and years of tough authoritarian rule have created deep mistrust and pent-up demand for change.

Mr. Tokayev and his predecessor Mr. Nazarbayev, who has continued to wield political influence behind the scenes, both have the backing of Russian President Vladimir Putin, who aligned Kazakhstan closely with Russia through a shared trade union and other strategic partnerships.

On Wednesday, the Kremlin warned against outside interference in the unrest faced by its Central Asian ally.

“We are convinced that our Kazakh friends can independently solve their internal problems,” presidential spokesman Dmitry Peskov said, according to Russian state news agency RIA Novosti.

Russia’s foreign ministry said it was “closely following the events in the brotherly neighboring country” and “we stand for a peaceful solution to all problems within the framework of the constitutional and legal field and dialogue, and not through street riots and violation of laws.”

The White House also was following reports of the protests in Kazakhstan, press secretary Jen Psaki told reporters Wednesday, and she said the administration supported “calls for calm, for protesters to express themselves peacefully and for authorities to exercise restraint.”

She dismissed what she described as “some crazy Russian claims” about the U.S. being behind the unrest.

“Let me just use this opportunity to convey that is absolutely false and clearly a part of the standard Russian disinformation playbook we’ve seen a lot of in past years,” she said.