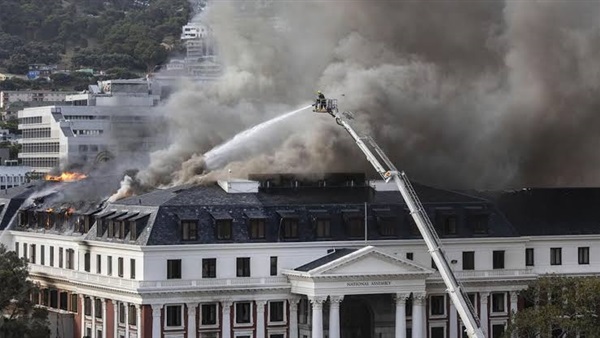 A huge fire ripped through South Africa's parliament building in Cape Town on Sunday, with media coverage showing flames coming from the roof of the building and a plume of smoke that could be seen from some miles away.

The fire started in the early hours of the morning in the third-floor offices and spread to the National Assembly chamber, said Jermaine Carelse, spokesman of the Cape Town Fire and Rescue Service.

It wasn't immediately clear if anyone was in the building, but Mr Carelse said there have been no reported injuries.

Jean-Pierre Smith, a Cape Town mayoral committee member responsible for safety and security, said the roof had caught fire and the National Assembly building too.

The Houses of Parliament in Cape Town consist of three sections, including the original and oldest building that was completed in 1884.

The newer additions - constructed in the 1920s and 1980s - house the National Assembly.

In April last year, a fire ravaged part of The University of Cape Town's library housing a unique collection of African archives