Why does Austria stay silent over dual national’s arrest six years ago in Iran? 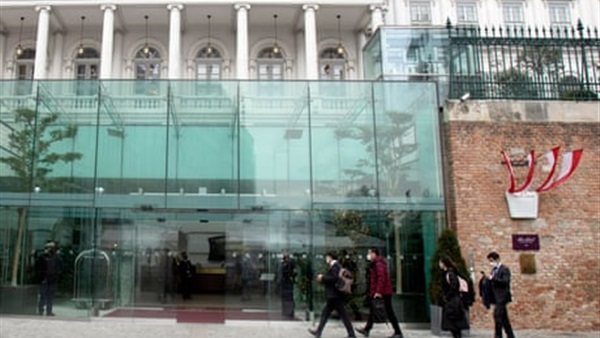 Six years ago on New Year’s Day, an Iranian-Austrian IT businessman said goodbye to his wife and three children and boarded a flight from Vienna to Tehran via Istanbul. Kamran Ghaderi was due to return five to six days later, but instead, on 2 January 2016, he was arrested and has now spent six years in Evin prison in Tehran.

In October 2016, he was sentenced to 10 years for spying for a foreign country at a trial in which neither he nor his lawyer were able to say more than two words. His sentencing was based on a confession he gave under what his wife, Harika, says was torture, in the belief she might be in danger. No written judgment has ever been given to his family.

“The effect on our three children – that is the most painful aspect of this story,” says Harika in an interview. “I cannot comfort them. My daughters were nine and 12 years old. Now they are 15 and 18. Our boy was two years old and now he is eight. He does not remember his father and he was asking every day, ‘where is my father?’ I showed photos with him when he was a baby, but he thought his father was dead. When he was four years old, he asked whether his father was in prison.

“The older children were scared they might be arrested too. They are still careful to see if anyone is following them.”

Harika lost weight until she became “a skeleton”, and despite taking pills found it difficult to sleep for more than two hours at a stretch.

On this harrowing anniversary she recalls every aspect of his disappearance. In advance of his visit, there had been no reason to be wary. Ghaderi – who had left Iran in 1983 to study electrical engineering in Vienna – was not a political activist. He had been on many business trips across the Middle East as an IT consultant, and in 2015, after the Iran nuclear deal, he went on an official Austrian business delegation to Tehran led by the then Austrian president Heinz Fischer. Relations were on the up.

Normally on his trips to Tehran he stayed with his elderly mother. Harika says: “On the first day I do not usually call him because he has a lot of meetings so I normally wait a day. This time when I spoke with his mother she said, ‘No, he is not here’, so that was a big shock.

“I first thought he might have had a heart attack on the plane. It was not a direct flight but there was a transit in Istanbul, so I rang the airport in Istanbul and asked if he could be in a hospital. The airport said they had no such information. All I knew was that he had been onboard the flight from Vienna. It was a Sunday and all the travel agencies were closed so I drove to the airport, and said I have to know whether he was on the flight from Istanbul or Tehran or not. They said they would not give information to a third party, and I was screaming and shouting. I was not myself.

“Next I thought a taxi driver had attacked him for his money – all kinds of things were in my mind, but I never ever had the thought that he had been arrested by the government. The next day his brother went to Tehran airport and he was told he had been arrested and taken from there. We did not know who had arrested him, or for what reason. One and a half months after his arrest, the IRGC [the Islamic Revolutionary Guard Corps, a branch of the Iranian armed forces] allowed him to call me, and he was allowed to say, ‘I am alive. Take care of yourself and the children.’ I asked him what had happened and – he was crying – he said he was not allowed to tell me.

“Three months later his mother received a call and was told she could visit him. That visit so affected her that she had to be driven to hospital with high blood pressure. He had lost 16 kilos and he told her under pressure he had signed two confessions.”

Ghaderi finds it painful that her husband is still in jail, innocent, and cut off from his family, save a daily phone call, while the Austrian foreign ministry has hosted since April an Iranian government delegation in Vienna to discuss the future of the country’s nuclear deal.

It is perhaps not a coincidence that French, German, British and US dual nationals are held by Iran, their countries being among the signatories to the stalled nuclear deal, but the detention of Ghaderi and another dual national Massud Mossaheb, the secretary of the Austro-Iranian Society, is a puzzle.

Ghaderi explains: “I have come to realise this was a business for Iran, so my question to the Austrian ministry was ‘why him, what do they want in return for Kamran?’ It may not be something directly from Austria but from the EU.”

Either way, the Austrian government has taken the softest of approaches to his plight, insisting quiet diplomacy is the best solution.

In an open letter to the ministry in April, the two families begged to differ: “You do not publicly request their release, nor do you publicly acknowledge the injustice, torture and illegality of their imprisonment. After years of continuing to rely on ‘silent diplomacy’, we interpret this either as a sign of resignation, a lack of commitment or a lack of will to consider alternative strategies.”

Looking through the public comments of the Austrian foreign ministry, it is hard to know that two of its citizens have been arbitrarily detained. The foreign minister, Alexander Schallenberg, has met Harika only once, when he was, she says, very kind, but meetings between the hostage families and the ministry are rare.

The greatest irony is that Iran is mounting a campaign asking Iranian citizens abroad to return to their country to work. Perhaps, looking at Ghaderi’s family, few in the diaspora will be rushing for a flight back to Tehran.