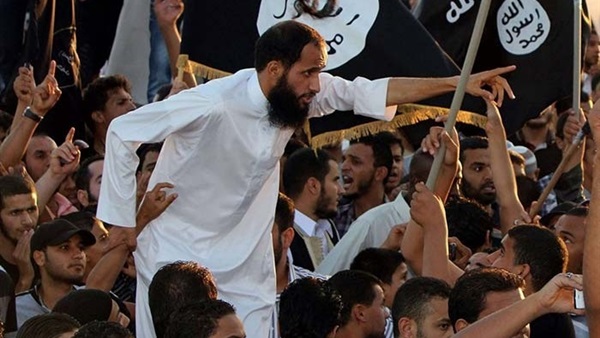 The political reality is a key factor for understanding the Madkhalist mindset. They see jihad according to the profit/loss equation. What would be the gain from jihad?

Therefore, Madkhalists decry all jihadist groups worldwide even the Palestinian resistance. Osama el-Qoussy labels Palestinian movements Hamas and al-Jihad movements as fools, citing that jihad in the modern times is merely sufficiency duty, and not an individual duty.

"Each country has an army and that fulfills the individual duty. If you say this is the devil's army, you will be Kharijite," he said.

When Hamas assumed power in Gaza, Madkhalists had a problem. In their point of view, Hamas had to obey the rulers in Palestine Yasser Arafat and Mahmoud Abbas afterwards. If Hamas didn't obey the legitimate rulers, it would be considered as Kharijites.

Osama el-Qoussy said Hamas has become the ruler. But later he said the ruler was Mahmoud Abbas. For his part, Saeed Raslan attacked Hamas, labeling it as a Kharijite group.

Madkhalists approve peace agreements with Israel, citing that Prophet Mohamed [PBUH] made a pact with the Jews in Medina and signed Treaty of Hudaybiyyah with the Quraysh tribe as he had no power then.

After the Arab Spring, the Madkhalist trend was the sole gainer. It has sustained its approach, labeling all Islamist groups as Kharijites. The ruler is the pillar of the nation.

The formation of groups opposing the ruler is considered by Madkhalists to be sedition, weakening the Islamic nation. That has caused political turmoil, according to the Madkhalist mindset.

All groups are Kharijites

Although Kharijites no longer exist as they vanished centuries ago, the term has strong presence and significance in the Madkhalist discourse. It defines a doctrine, which is not related to a specific group that existed in a certain era.

The ideas are still in effect until this day. Madkhalists consider the formation of groups is absolute disobedience.  Calls for sit-ins, demonstrations, strikes and civil disobedience are all Kharijite actions.

These actions are not based on an Islamic reference.

They say "verbal disobedience" to be minor revolt. Madkhalists say that those who call for revolt and do not revolt are the wickedest of all Kharijites.

War on Israel ahead of doomsday

Madkhalists say fighting Israel will be ahead of doomsday. This war is indefinite and time hasn't come yet for such a war, according to the Madkhalist ideology.

Israel is not an enemy should be fought immediately, but the war will inevitable later ahead of doomsday.

However, there's a common agreement among Madkhalists and other Islamists. They all say that an Islamic state should be based on what they believe. They believe that the Islamic caliphate will be established, Rome will be conquered, and Mahdi will appear.

This ideology has made the rulers encourage Madkhalists prosper at the expense of other groups. Madkhalists also controlled Jamaat Ansar al-Sunna.

In 1919, sheikh Mohamed el-Feqy stood up against the public uprising against the British occupation in Egypt. He resisted the 1919 revolution as he rejected any change via uprisings or revolts.

Madkhalists adopted the same approach of Jamaat Ansar al-Sunna. The Salafi sheikhs grow and purify Muslims first then select the ruler and announce their Islamic state. This is the approach launched by al-Albany later.

When asked about their stance on Israel, the Salafists would talk about faith, bidaa (religious innovation) without any reference to what is taking place in Palestine.

They say the return to true faith will send the nation back to its glorious days.

Madkhalists also legitimatized normalization with Israel, establishing evidence from sharia for making pacts with Israel and Israeli West Bank Barrier. They said boycotting Israel and US products are unlawful. They said expulsion of the Israel ambassador [to Egypt] is unlawful.

Amer said Prophet Mohamed traded with the infidels who did not accept as a prophet. Amer asserted gas exports would be allowed if we are fighting Israel.

Amer says lack of true sharia concepts leads to chaos and lawlessness. Amer also challenged those who wanted to expel the Israeli ambassador to Egypt. "An exchange of envoys is a common practice among the fighting sides," he said.

Sheikh Osama el-Qoussy decried resistance, calling on Muslims to reform themselves first. "We talk about reforming the universe while our wudu is not perfect. Let's start where Prophet Mohamed began," said el-Qoussy.

El-Qoussy approved of Anwar Sadat's initiative to make a peace accord with Israel. He decried Arabs who rejected the peace treaty with Israel.

Change from bottom to top

The change can happen either from either bottom to top, or from top to bottom.  Here Islamist groups have different views. However, they have conciliatory perspective sometimes.

The groups which believe in top-to-bottom change never neglect the base, as assuming power will inevitably change the bottom. Those who believe in bottom-to-top change postpone assuming power.

The state authorities deem Madkhalism to be some décor to promote the idea that the state does not prevent Islamists from taking part in the political scene. The state has left the Salafi activities in their schools, institutes, associations and satellite TV channels.

However, the media in general and the social media in particular undermined the state's plan.

Madkhalists have taken advantage of the freedom they have to penetrate the youth community and focused on the social work for bottom-to-top penetration.