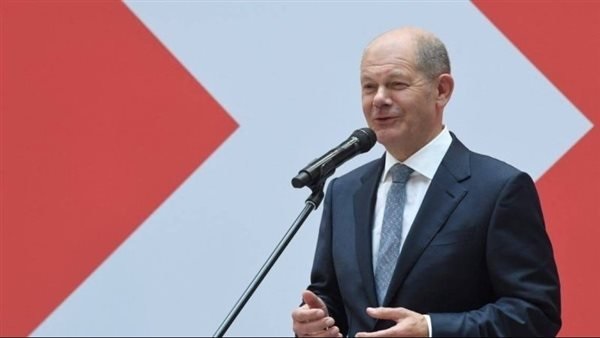 Olaf Scholz was voted in as Germany’s new chancellor this morning and faces an immediate test of his leadership as the US pressures him to cancel a controversial gas pipeline from Russia if the Kremlin invades Ukraine.

Scholz, 63, and his centre-left Social Democrats (SPD) won the Bundestag election in September and swiftly assembled a three-party ruling coalition with the Greens and the libertarian Free Democrats (FDP).

The new government’s agenda includes a range of radical social reforms such as the legalisation of recreational cannabis consumption and a law that would allow anyone over the age of 14 to formally change their gender at will.

It also aims to generate 80 per cent of Germany’s electricity from renewable resources by 2030 at the same time as closing the country’s three remaining nuclear reactors next year and its last coal-fired power stations by the end of the decade.

However, Scholz’s first days in office will be consumed with crisis management. The fourth wave of the pandemic is pushing hospitals in many parts of the country to their limit, with a further 527 deaths over the past 24 hours, the highest daily total since the dark days of the second wave in February.

President Biden’s administration is also lobbying Berlin to draw up plans for the cancellation of the Nord Stream 2 gas project as part of a package of potential sanctions to deter President Putin from sending Russian troops into Ukraine.

The twin pipelines, which run along the floor of the Baltic Sea from Russia to northern Germany, were completed in the summer but have yet to receive final approval from a German regulator.

Germany’s allies, including the US, Britain and Poland, fear that the project will make it easier for Putin to bully Ukraine because it gives him an alternative route to supply gas to central Europe. It would roughly double the direct flow of natural gas from Russia to Germany and its neighbours.

After a phone call between Biden and Putin yesterday, Jake Sullivan, the US president’s national security adviser, said Nord Stream 2 was a strategic “object of great priority” for Washington as it tried to find credible counter-measures against a Russian invasion of Ukraine.

“We’ve had intensive discussions with both the outgoing and incoming German [governments] on the issue of Nord Stream 2 in the context of a potential invasion,” Sullivan said.

However, Scholz has said he will continue with the course set by Angela Merkel, 67, his predecessor, who defended the pipelines while promising that Germany would impose other kinds of economic sanctions on Russia should it threaten Ukraine.

The decision is an awkward quandary for the new chancellor. His own government is divided over the issue, with both the Greens and the FDP having called for a moratorium on the pipelines, and has promised to work hand-in-glove with the US on questions of foreign policy.

Scholz is also acutely conscious that Germany will struggle to meet growing demand for electricity over the coming years while pulling out of coal and nuclear power.

The coalition agreement does not mention Nord Stream 2 by name but it does contain a strong commitment to natural gas as an important transitional fuel source.

It is understood that the spike in European gas prices over the autumn — and the accompanying prospect of soaring heating and electricity bills for German households this winter — have increased Scholz’s resolve to bring the new pipelines into operation.

Another difficult item looming in Scholz’s in-tray is China. Both the FDP and the Greens have signalled in recent days that they are open to joining the US diplomatic boycott of next year’s Winter Olympics in Beijing.

However, sources close to the new chancellor have indicated that he is reluctant to risk jeopardising Germany’s exports to China at a time when the economic recovery from the pandemic is on the line.