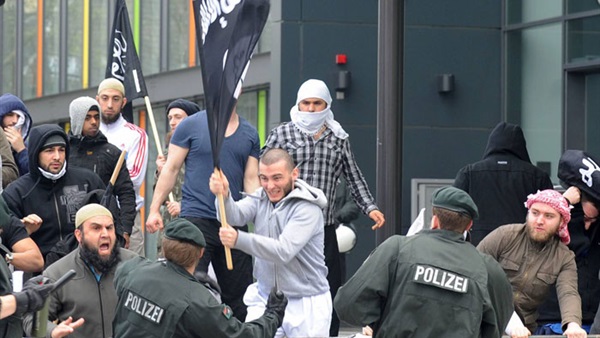 Madkhalists say obedience to the ruler is not enough, citing that all of the state's institutions, like the official mufti (who issues fatwas) must be recognized as well. If any people violate the state's official fatwas would be considered "Kharijites".

This Salafi School introduces itself as a trend that calls for absolute obedience to the rulers. Madkhalists issue fatwas and publish books and release statements that warn the people against any partisan activities and the Muslim Brotherhood and Al-Tabligh.

Madkhalists, whether in the east or west of the Arab world, also warn against new methods used for preaching like songs, plays and others.

Madkhalists ban any revolt against the rulers, even if they are lewd. They considered the revolt which happed in the time Othman ibn Affan, the Third Muslim Caliph. This revolt has caused sedition.  The rulers cannot be opposed in any way.

The advice to the rulers cannot be made in public. They consider that to be part of the Islamic faith and doctrine. Any violation to their approach would lead to joining forces with a misled and "misguided group", which is another historical term labeled the group which revolted against Ali ibn Abi Talib.

Madkhalists consider oppressive rulers of Muslim nations to be legitimate and should be obeyed. They deem all who oppose the rulers to be "Kharijites" and of bidaa (or religious innovation). Those who fall under the impact of bidaa can never be accepted.

They also say that faith is a matter of the heart without action. Therefore, an infidel is defined as the one whose heart is infidel without any recognition of his conduct.

Most of Madkhalists do not approve any organizational activity based on allegiance to anyone else other than the ruler.

Sheikh Saeed Raslan launched sever crackdown on organizational and group activities from  his hometown Sobk Al-Ahad, Menofiya governorate. The Salafists of Alexandria considered this to be some declaration of war.

An essay by sheikh Yasser Borhamy [an Alexandrian Salafist] angered sheikh Saeed Raslan. Borhany's essay concluded that the Islamist groups "are the nation's hope" and the survival of the Muslim nation relies on these groups.

Raslan decried the essay, accusing the writer – Borhany – of ignorance of the Salafi position and stance. He even doubted if Borhany was a Salafist in the first place.

Whoever says that favors the Muslim Brotherhood organization, which defends Shiites and embrace with democracy, Raslan said in his sermons.

"I tell the misguided, fear Allah! Those who say that are either not really Salfists, even if they say they are Salafists, or absolutely ignorant of Salafism. Who says that approves the Brotherhood's approach, which defends democracy and claims it is true Islam. They [the Muslim Brotherhood] believe in bidaa like Sufism, Jahmiya and Kharijtes," sheikh Raslan said.

"Someone would say they challenge the regimes and confront corrupt rulers. However, the communists, liberals and seculars are challenging the regimes now in the name of religion too. Would that mean anything? Say I believe in Allah and be correct. Didn't the one who speaks about the Islamist groups [Borhmay] know anything about Al-Tabligh organization? What do those people want?

"We clearly say that the organizational activities are haram, or unlawful. This is definitely bidaa (religious innovation)," sheikh Raslan said.

Mohamed Ismail el-Moqaddem, an Alexandrian Salafi preacher, retorted Raslan's sermons. But he admitted defects, which should be fixed instead of removing these Islamist groups.

El-Moqaddem raised the question: Where would people seek refuge if these Islamist groups do not exist? Where would the people turn to?

He claimed that such negative aspects, even wars, also existed in the first centuries of Islam. El-Moqaddem said collecting the Holy Qur'an was a kind of organizational activity and a necessity.

"One of the minuses of the Islamist groups is that each of them claim it is the one cited by the Prophet [PBUH] when he said: "The path which I and my companions lead". This kind of groups promotes partisanship and fanaticism. Some people use these defects as an excuse to get rid of these groups altogether. However, scholars say the legitimacy of a group is established on a base of common benefits," said el-Moqaddem.

However, Raslan retorted back at el-Moqaddem, affirming that he did not reject group work in general.

"To the respected sheikh who named me and I did not name him. You concentrated on the snake so you didn't see the scorpion. Watch out! May Allah guide you and me to the right path! I wished these words you have spoken were uttered by your junior students, who make fatal mistakes in research," Raslan said during a sermon at al-Masjid al-Sharky in Sobk Al-Ahad, Menoufiya governorate.

Madkhalists do not differentiate between Ijyihad, or exercise of judgment, penalties and fundamentals. They accuse whoever disagrees with them in any matter with perpetration of bidaa. Madkhalists accuse anyone who opposes their opinions or estimation of perpetrating bidaa, or religious innovation.

Madkhalists believe Salafist scholars should rebut the Islamist groups in case of any unjust judgments.

Fanaticism and arrogance grew more and more between the Brotherhood and Madkhalists. Both sides sought to monopolize the Islamic activities.

The conflict between the Madkhalists and the Brotherhood was fueled by the sharia fundamentals regarding the Brotherhood's political practices, which deserved criticism. Moreover, the Salafi ultraorthodox heritage has caused disagreement.

Madkhalists are loyal to their Salafist sheikhs, while the Brotherhood's members are only loyal to their leadership. This has led to a conflict of interest on both sides.

The centralized references of both movements (individual decision on the Salafi side and limited shura on the Brotherhood's side) have sustained the enmity.

The intellectual differences between the Brotherhood and Madkhalists ushered in disputes. The Muslim Brotherhood has a different fundamental mindset.

Each side decries the differences on the other side, for instance, growing beards and niqab, or veil that fully covers the face.