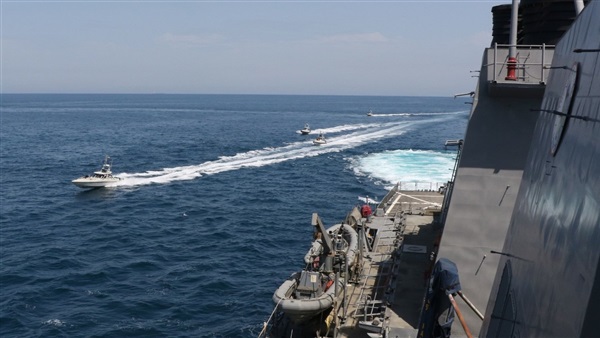 Iran's naval skirmishes and harassment of ships and tankers passing through the Strait of Hormuz continue as part of its policy to threaten and blackmail the countries of the world by putting pressure on its economic arteries.

A global naval alliance led by the United States was formed in the Arabian Gulf to confront Iran's arrogance following the increase in operations in the waters of the region.

In a remarkable development, Admiral Alireza Tangsiri, commander of the Iranian Revolutionary Guard Corps (IRGC) navy, announced that his forces had provided what he described as “nine martyrs” in direct battles with the Americans to defend Iran's sovereignty in the Gulf.

Tangsiri added in a speech he delivered at the Seventh National Conference for Tactical Students, “Of course, some clashes with the Americans were not announced in the media for some reason, and in exchange for nine martyrs who sacrificed in direct battles with the Americans, we were able to inflict nine unforgettable slaps on them, thanks to God Almighty, and they realized today the sovereignty of the Islamic Republic is in the maritime arena.”

This is the first time that a senior IRGC military commander has admitted that his country has suffered human losses in confrontations with US forces in the Gulf over the past year and a half.

These statements came in conjunction with the IRGC’s announcement that it had detained a foreign ship under allegations of fuel smuggling.

Colonel Ahmad Hajian, a naval commander in the IRGC, said that 11 members of the ship's crew were arrested on board, while the name of the ship's country or the time in which it was detained was not announced.

An Iranian radio website quoted Hajian as saying, “Thanks to our intelligence, and in a coordinated operation, our navy was able to control a foreign ship with 11 sailors on board in our territorial waters,” adding, “After the inspection, more than 150,000 liters of diesel were confiscated, and the 11 foreign crew members were brought before a court.”

It should be noted that the incidents of hijacking ships and naval skirmishes in which the Iranian army and Revolutionary Guards were involved escalated with new President Ebrahim Raisi assuming power in the country in August.

Recently, it was reported that armed men hijacked a ship flying the flag of Panama in the Gulf of Oman and took it towards Iranian shores. But Britain's Maritime Security Agency later announced that the incident, which was considered a “possible hijacking,” had ended without damage.

The American forces and the Revolutionary Guards were on the brink of confrontations after an Iranian force seized a Vietnamese tanker on October 25, which was later released.