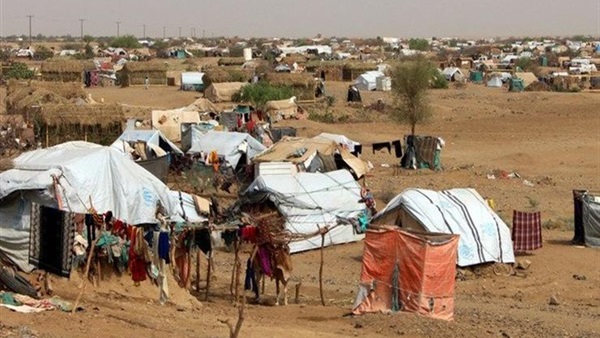 The violence perpetrated by the Iranian-backed Houthi militia has caused the displacement of a large number of families in western Yemen in light of the difficult humanitarian conditions that the country has been experiencing since the Houthi coup.

The Al-Wa'ra camp for the displaced was set up as an emergency in Al-Khoukha district, an area under the control of the internationally recognized government forces, due to the continued flow of displaced families from the areas that were evacuated south of Hodeidah in implementation of the Stockholm Agreement.

According to the Al-Mashhad al-Yemeni website, one of the displaced in the new camp said that the assistance the displaced received gave him feelings of hope for a stable life far from the Houthi militia, which committed atrocities, including slaughter, killing and flaying, amounting to war crimes.

The joint forces had unilaterally evacuated their positions covered by the Stockholm Agreement, south of Hodeidah, but the Houthi militia violated the rules of the UN agreement and invaded those areas in the coastal governorate.

During the control of these areas, the Houthis practiced intimidation against the population and executed and massacred civilians suspected of collaborating with government forces, which led to the outbreak of an unprecedented displacement crisis.

In this context, the director of the Executive Unit for the Management of IDPs Camps in the West Coast, Hamid al-Khazan, said in press statements that the local authorities, in cooperation with the humanitarian cell in the joint forces, opened a camp for 300 families (2,100 individuals) who arrived in Al-Khoukha out of about a thousand families who had managed to escape the areas where the Houthis had entered.

“The authorities are preparing to open another camp for 600 families (4,200 individuals) who are still without shelter until now, after the joint forces provided the ground on which the camp will be established,” Khazan added.

According to Khazan, the families who were housed in the first camp were provided with shelter materials and emergency aid kits, while the confrontations in the Al-Ghuwaireq area south of Tuhayta closed the way for civilians fleeing from the areas the Houthis entered, especially since the militia’s entry was sudden, which made it difficult for many families to escape.

For its part, the International Organization for Migration (IOM) stated that after the renewed hostilities on the western coast of Yemen, the organization’s Displacement Tracking Matrix estimated the displacement of more than a thousand families during three days of this month, and that the majority of internally displaced people had fled to the city of Al-Khoukha (895 families), followed by Mocha (129 families).

The organization emphasized that the situation remains highly volatile, with reports of continuing clashes along the new front lines, particularly in areas west of Hais and south of Tuhayta. Many people were forced to flee for the second or third time and are now fleeing again to displacement sites in Tuhayta and Al-Khoukha.

In total, an estimated 815 newly displaced families have arrived at sites managed by IOM, local authorities and humanitarian partners, with reports of 439 in Al-Khoukha, 260 in Mocha and 136 in Tuhayta.

IOM is particularly concerned about the situation of more than 1,700 displaced families who remain in seven locations near the front lines in Tuhayta, where humanitarian access has become limited.

The organization said that its teams in Al-Khoukha are continuing to register the displaced, and that the local authorities are planning to establish two additional sites in Al-Khoukha and one in Mocha to support the newly displaced, as the majority of the displaced persons share overcrowded shelters and are in need of basic and non-food household items, cash assistance, and greater access to water and toilets.

As winter approaches, they also need sandbags and other materials so that their shelters can withstand the strong monsoons.

According to the statement, IOM is working with partners to respond to the needs of those affected by providing basic services to the newly displaced in nine sites it manages, where it has deployed mobile medical teams to provide immediate health services to the displaced, including health examinations and emergency medical care, as part of the emergency and preparedness activities. It is also stocking 1,400 emergency shelter kits and 1,900 hygiene kits and non-food items in Mocha and Aden.

The city of Hodeidah, which includes a port that is a lifeline for millions of people, has been under the control of the Houthis for years, but government forces were deployed around it from the southern and part of the eastern side until they retreated tens of kilometers.