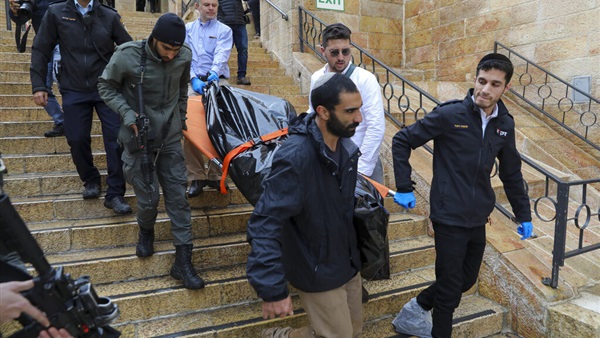 A member of the Palestinian militant group Hamas fatally shot one Israeli and injured four others near one of Jerusalem’s holiest sites on Sunday, according to Israeli police, who shot dead the assailant and boosted security in the city on concerns over a flare-up in violence.

The gunman, a 42-year-old religious teacher dressed in a long black robe, opened fire near Jerusalem’s Chain Gate, a key point of access to the contested religious site known as the Temple Mount to Jews and the Noble Sanctuary for Muslims. Of the survivors, two civilians were injured—one moderately and one who is still in serious condition—and two police officers were lightly wounded, Israeli police said. The dead civilian was identified by Israeli police as 26-year-old Eliyahu David Kay, a recent immigrant from South Africa who worked in the Old City of Jerusalem.

Two policewomen shot the attacker to death after he opened fire, the police said.

Hamas, which the U.S. and Israel consider a terrorist organization, praised Sunday’s attack by one of its members and threatened more violence over Israel’s policies in the contested city.

“We need to be on heightened alert and prevent future attacks,” said Prime Minister Naftali Bennett after the attack. He added that he had directed the country’s security forces to prepare accordingly.

A recent uptick in violence in Jerusalem has heightened worries over a broader escalation only six months after tensions in the Holy City sparked nearly two weeks of fighting between Israeli forces and Hamas, which rules Gaza and is increasingly trying to boost its influence in Jerusalem and the West Bank.

The Israeli government has tried to manage tensions with Palestinians through measures that have boosted work permits and other steps meant to bolster the Palestinian Authority in the West Bank, Hamas’ chief political rival, including a $150 million loan and an upgrade in some infrastructure.

But Palestinians have also been angered by the recent Israeli government move to approve more than 3,000 settlement units in the West Bank and the designation of six Palestinian nongovernmental organizations as terrorist groups. Independent investigators have alleged that members of some of those groups were being monitored by software created by Israeli cybersecurity firm NSO Group, which was blacklisted earlier this month by the U.S. Israel’s internal security agency, the Shin Bet, said it couldn’t comment on the technology used in the investigation.

Israel captured East Jerusalem from Jordan during the Mideast war of 1967, and considers the entire city under its sovereignty. Most of the international community doesn’t recognize Israel’s control over East Jerusalem and opposes the expansion of Israeli settlements there, where around 350,000 Palestinians live using a mix of Jordanian, Palestinian and Israeli identity cards.

Though primarily based in Gaza, Hamas has tried to harness Palestinian anger over Israeli policies in Jerusalem. Leading up to and following a conflict between Israel and Hamas in May, the militant group has sought to present itself as the defender of Palestinian interests in Jerusalem, which Palestinians want as a capital in a future Palestinian state.

Israel and Hamas have fought three wars since the militant group seized control of the Gaza Strip in 2007. The two sides have seen several major escalations since spring 2018. Both sides agreed to a cease-fire to end 11 days of deadly fighting earlier this year following pressure from the U.S. and its allies.

The Al Aqsa mosque was also at the center of the most recent conflict. Palestinians demonstrated over the possible eviction of residents from homes in the Sheikh Jarrah neighborhood of East Jerusalem. Israeli police stormed the mosque compound during a crackdown on protesters, who police said threw stones and fireworks at them. Days later, Hamas fired a salvo of rockets at Jerusalem, which Israel said crossed a red line.

Hamas on Sunday threatened to resume hostilities after the attack. It said the assailant, a middle-aged man named Fadi Mahmoud Abu Shkhaydam, was the organization’s leader in the Shuafat refugee camp located in East Jerusalem.

“(The) attack is a warning to the criminal enemy and its government to stop attacks on our land and holy places,” Hamas said in a statement, mentioning specifically the Al Aqsa Mosque and neighborhoods in East Jerusalem where land is currently being contested by Israelis.

The attack sent bystanders fleeing through the narrow streets of Jerusalem’s Old City when the assailant opened fire with a Carlo-style improvised submachine gun, a popular weapon of choice for Palestinian militants in recent years. Police said the choice of weapon suggested a level of planning.

“It appears to me this was premeditated,” said Israel’s Minister of Public Security Omer Bar Lev. The gunman came every morning to pray at the nearby Al Aqsa Mosque, he said, and added that his wife traveled abroad three days ago, a sign of premeditation, according to the minister.