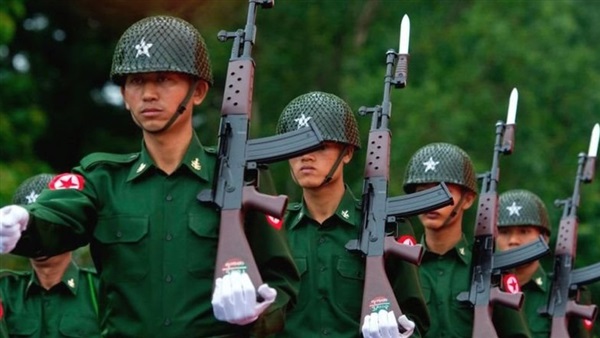 Aung Myo Htet had always dreamed of being a soldier, and had attained the rank of captain. But when he joined the army in Myanmar, he had thought he would be defending his country, not fighting — and losing — pitched battles against his own countrymen.

In June, he was sent to the front lines in Kayah State to subdue resistance fighters and armed protesters opposing the generals who seized power in a February coup. Three of his fellow soldiers were killed, said Aung Myo Htet, 32.

“Seeing the casualties on our side made me feel so sad,” he said. “We were fighting and sacrificing ourselves for the general’s sake and not for the country.”

On Oct. 7, he walked off his base and joined the country’s Civil Disobedience Movement, a nationwide effort aimed at restoring democracy and bringing down Senior Gen. Min Aung Hlaing, the man behind the coup. At least 2,000 other soldiers and police officers have done the same, part of a broader campaign to weaken the Tatmadaw, Myanmar’s most notorious institution.

The defectors are a small percentage of the Southeast Asian nation’s army, which is estimated to number between 280,000 and 350,000. But they appear to have struck a nerve, and to have contributed to a growing crisis of morale among the troops. The army is struggling to recruit. It has recalled all retirees, threatening to withhold pensions if they do not return. Wives of soldiers say they are being ordered to provide security for the bases, in violation of military law.

For the first time in its 67-year history, the Myanmar Defense Services Academy, the country’s equivalent of West Point, was not able to fill the seats for this year’s freshman class.

“Never have we seen defections at this level,” said Moe Thuzar, the co-coordinator of the Myanmar Studies Program at the Institute of Southeast Asian Studies in Singapore. “What we’re seeing since February is this steady trickle of people leaving, and also publicly stating their support for the C.D.M. That’s unprecedented.”

General Min Aung Hlaing still has the loyalty of his top officers, and there are too few defectors to topple the Tatmadaw. But those who are leaving are being quickly embraced by the resistance. Four of Myanmar’s armed ethnic organizations, which have battled the Tatmadaw since the country became independent from Britain in 1948, have offered food and refuge and the opportunity to combine forces.

“Their seasoned military experience has been invaluable for our armed resistance,” said Naing Htoo Aung, Secretary of Defense for the National Unity Government, a group of deposed leaders that has declared itself Myanmar’s legitimate government and that has been tracking the growing number of defectors. “We all now have a common goal.”

Many defectors have publicized their accounts on social media, encouraging other soldiers to follow them. Most of the people who have left are lower ranking, but some have been officers.

Several defectors are now working with a group of tech activists in a stealth online campaign to get more troops to break ranks. Using stock images of military men and attractive women as profile photos, the activists have created more than a dozen fake Facebook pages to befriend soldiers.

The accounts are used to send direct messages, imploring them not to hurt innocent people. Another group has used Facebook to urge wives to persuade their husbands to leave the military and stop supporting the junta.

“There’s significance in the propaganda war that’s playing out,” said Richard Horsey, a senior adviser on Myanmar for the International Crisis Group. “I think they make the resistance feel emboldened and confident.”

Soldiers who have left say they have felt compelled to do so after the coup, describing their revulsion at instructions from their superiors to shoot civilians. On Nov. 6, the head of a United Nations body investigating war crimes in Myanmar said the military’s attacks on civilians amount to “crimes against humanity.”

“When I was ordered to shoot, I called the people and told them to run away,” said Htet Myat, a captain who was stationed in Bhamo, a city in northern Myanmar that has been the site of intense fighting between ethnic armed rebels and the army. “The people were saved, but I could not live in such an inhumane place.”

Yet defecting can be as dangerous as any battlefield. People’s Soldiers, a group set up by a former captain who was once a speechwriter for Gen. Min Aung Hlaing, has tried to help.

One night in August, Kaung Htet Aung, a 29-year-old sergeant, watched a fellow soldier, on a Zoom session hosted by People’s Soldiers, debate a major who had defected in March and was speaking from a hidden location. As he lay in his barracks and secretly watched the video, Kaung Htet Aung thought about how much the major had to sacrifice to join the anti-coup movement.

He later contacted People’s Soldiers, which told him they would help him defect, marking the start of a harrowing journey. He left his base on May 9 and got into a motorcycle accident. When he sought help, he was thrown into a military prison, he said. On Sept. 6, he escaped the prison, and made his way on foot into the jungle.

The sergeant, who used to make ammunitions, then took a bus to a “liberated area,” a term that the resistance uses to refer to the ethnic borderlands in Myanmar. “I was very happy to be free,” he said. “Now I don’t have to make bullets to kill people.”

While The New York Times could not independently verify the soldier’s account, the risks of defecting are clear. It carries a jail sentence of three years, and family members often face retaliation. The journey can be perilous, involving hide-outs in multiple cities before reaching safety in the borderlands.

Defecting also means sacrificing a potentially lucrative future. Officers who are able to rise up through the ranks typically benefit from the Tatmadaw’s vast business holdings, which include the country’s two most powerful conglomerates.

“Most people in the military are brainwashed and can’t see the truth,” said Lin Htet Aung, a captain who defected in March. “Some who see the truth do not want to give up their position.”

One argument that defectors use to persuade others to leave centers on the poor treatment of ordinary soldiers. Zwe Man, a corporal, said he wanted to join the military after seeing people put garlands on troops marching in the southern city of Bago in 2016.

A year later, he graduated from the military academy and became a sniper. He said he earned just $105 a month and that the food was bad. “I joined the army because I wanted to be a soldier who protects the country and is loved by the people,” he said. “But when I joined, I found out that it was a place to torture lower-ranking soldiers.”

In May, Mr. Zwe Man stumbled across the People’s Soldiers Facebook page and started reading the comments:

“The military is murdering its own people.”

“The military is the big thief.”

“The military is trying to rule the country for their own sake.”

In July, during the height of a Covid-19 outbreak, Mr. Zwe Man said the army did not isolate people who were infected with the virus, resulting in deaths in the barracks. He has also been haunted by violence he has witnessed since the coup: people being arrested and homes being burned down.

He said his girlfriend told him that the army was killing civilians and encouraged him to join the Civil Disobedience Movement. “I decided that what I really needed to do was to stand up for what was right,” he said. “And not be on the wrong side of the people.” On Sept. 17, Mr. Zwe Man asked his army supervisor for permission to leave the base.

His request was approved, he said. And he never returned.