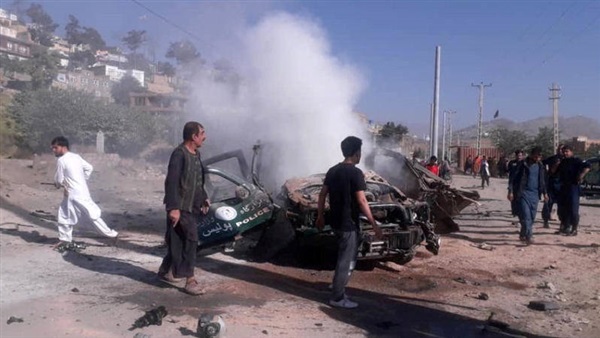 Eight-month-old Mohammad’s chubby cheeks and pudgy legs could be mistaken for healthy baby weight to the untrained eye, but in fact he is suffering from acute malnutrition. One of the symptoms is swelling, and his is so severe that he had to have a cannula inserted into his head to drain the fluid.

Mohammad has been at Ataturk Children’s Hospital in Kabul, Afghanistan, for 15 days. His little body is motionless but for the rapid shallow breaths he takes and the occasional splutter of a phlegmy cough. He has several medical conditions as a result of his mother also suffering from malnutrition while pregnant.

“He had some chest problems so I took him to the doctor who said he needed to be admitted to hospital,” his mother Fereshta Wafa, 27, said.

Wafa has three children but has already lost another two to malnutrition. She broke down and sobbed uncontrollably when she talked about their deaths.

“I lost my three-year-old daughter six years ago and last year I lost my seven-month-old son. This is God’s will. But to watch Mohammad suffer through the same illnesses is beyond heartbreaking. Even his father cried at seeing the condition he’s in,” Wafa said, as she tried to wipe away the tears pouring down her cheeks with her headscarf.

“He still isn’t eating and although the swelling went down, it’s come back again.”

The United Nations has warned that the latest conflict, combined with drought, Covid-19 and economic crisis, have put 22.8 million people, more than half the country’s population, at risk of acute hunger. It predicts 3.2 million children under five will suffer acute malnutrition in Afghanistan by the end of the year.

A million children like Mohammad could die without life-saving treatment, only possible at such scale with international intervention.

Life has long been a struggle for Wafa and her family, but since the change in government, things have become considerably more difficult.

“My husband used to sell fabric and scarves, but people stopped buying from him because they have no money because of the economic crisis. He couldn’t afford to buy the raw materials at the main market so he had to stop his business,” she said.

Mohammad has been diagnosed with congenital heart disease, metabolic liver disease and pneumonia. Wafa cannot afford the cost of tests to establish his enzyme levels so he is not able to receive treatment for his liver condition.

“It is not life threatening so we are treating his other conditions and hoping his liver will normalise as he gets older,” Atifa Shahpur, a trainee doctor who has worked at the hospital for one year, said. Like government employees across the country, Shahpur has not been paid for several months.

“We are hoping international aid can be received in Afghanistan so we can be paid what we’re owed. We are here because we are serving our nation, we understand these parents’ pain,” she said.

Afghanistan faces a huge cash deficit, mass starvation and a new migration crisis as billions of dollars of central bank reserves remain frozen by the US since the Taliban took control of the country.

At the Indira Gandhi Children’s Hospital, the main hospital for infants in the capital, beds in the ward for malnourished children are filled with skeletal babies and toddlers.

Two-year-old old Meena is so small and skinny she looks half her age. She sits up in bed staring listlessly across the room, her grandmother Bibi Hanifa next to her.

“Her mother died 18 months ago so she was only breastfed for six months,” Hanifa, who has travelled 150 kilometres from Ghazni, said.

“Her father is a teacher in a private school but he hasn’t been paid for the last few months because students have stopped coming to the school — they can’t afford to pay the tuition fees anymore.”

The four families in this cramped room are all from villages that were controlled by the Taliban prior to August 15. They said they have no access to proper healthcare facilities. Nurses at the hospital said this is the case for most of the families bringing in sick children for treatment who are now able to travel to the city since the conflict ended and security improved.

Although the current economic crisis crippling the country has compounded the issue of food security in Afghanistan, this has long been a severe problem across the country. This hospital has 20 beds available for malnourished children but during the winter beds can often have up to three patients in them, say the medical staff.

A new ward is being built with 30 beds but the change in government meant construction was halted. Unicef has now taken over the project in order to complete it.

“The health ministry recently asked us to put together a list of everything we need here,” says Najibullah Kochai, the head of nursing, who is hopeful this means things will improve.