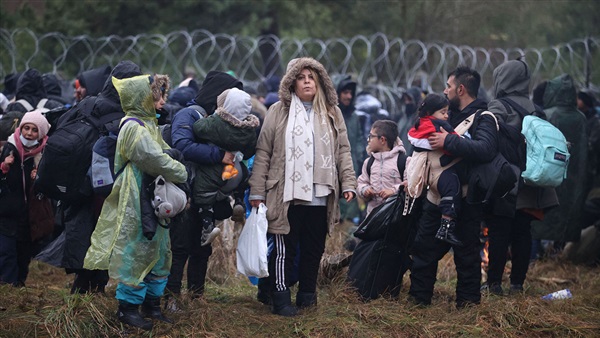 The sudden surge of migrants to Belarus from the Middle East that is now the focus of a political crisis in Europe was hardly an accident.

The government of Belarus loosened its visa rules in August, Iraqi travel agents said, making a flight to the country a more palatable journey to Europe than the dangerous sea crossing from Turkey to Greece.

It increased flights by the state-owned airline, and then actively helped funnel migrants from the capital, Minsk, to the frontiers with Poland, Latvia and Lithuania.

And Belarusian security forces gave them directions on how to cross into the European Union countries, even handing out wire cutters and axes to cut through border fences.

These moves, which European leaders have characterized as a cynical ploy to “weaponize” migrants in an effort to punish Europe, opened the gates to people desperate to flee a region plagued by instability and high unemployment.

Now, thousands of people are stranded or hiding along the border in freezing conditions, not wanted by the European Union countries or, circumstances are making clear, by the country that lured them there in the first place.

The human tide has turned cities like Sulaimaniya, in the Kurdistan region of Iraq, into bustling ports of departure for migrants eager to take an expensive and risky journey for the chance of a better life in Europe.

As word went viral on social media that Belarus offered a route into Europe, the number of migrants snowballed.

Mala Rawaz, a travel agent in Sulaimaniya, said he had been selling about 100 packages a week for trips to Belarus. The packages included airfare through a third country, transit accommodation and a Belarusian visa.

At the city’s bazaar, Bryar Muhammad, 25, was doing a brisk business on Thursday selling warm clothes.

“Good clothes for Belarus!” he shouted, holding up thick acrylic sweaters and winter jackets pulled from a cardboard box. “For the snow of Belarus!”

Even as young families in Iraq were putting up their homes as collateral to raise money for the journey, evidence mounted that Belarus’s autocratic leader, Aleksandr G. Lukashenko, was orchestrating the migration to manufacture a crisis for the European Union.

The Belarusian state-owned airline, Belavia, had increased flights from the Middle East to Minsk, European officials said. The Belarusian authorities eased the issuance of visas through the state-owned travel agency Tsentrkurort, according to the Lithuanian Foreign Ministry.

Migrants who reached Minsk were put up in at least three government-owned hotels, according to Latvia’s defense minister, Artis Pabriks, and Franak Viacorka, a senior adviser to a Belarusian opposition leader, Sviatlana Tsikhanouskaya.

Mr. Pabriks said that Belarusian intelligence agents had been involved in transferring migrants to the borders, and that military buses were used.

Several Iraqi migrants said that the Belarusian security forces provided them with tools to break through the Polish border fence.

Bayar Awat, an Iraqi Kurd stranded on the Belarusian side of the Polish border, said that Belarusian guards had helped his group reach the border by pointing out a route that bypassed the official border crossing and emerged near a gap cut in the border fence.

“The Belarus police guided us to the forest, then pointed directions to lead us inside the forest to keep us away from the official border crossing,” he said.

On Thursday, a Belarusian soldier was overheard on the phone ordering an Iraqi Kurd to direct a group of 400 to 500 migrants from the Lithuanian border toward the Polish border.

“All the people who move here go to Brest,” the soldier told him in broken English, referring to the Belarusian city on the Polish border, because there were too many migrants on the Lithuanian border.

When some migrants have tried to leave the frigid forest to return to Minsk, many have been pushed back by Belarusian guards, leaving the migrants stuck at the border, they said.

European officials say that these measures are part of Mr. Lukashenko’s effort to retaliate against the European Union for imposing sanctions after he claimed victory in a disputed 2020 election.

“Lukashenko’s rhetoric, the visa policy and the sudden influx of migrants this summer all point to the involvement of the Belarusian state and travel agencies,” said Gustav Gressel, a Berlin-based senior policy fellow at the European Council on Foreign Relations.

On Friday, in an effort to stem the crisis, several airlines took steps to limit the number of people flying to Belarus from the Middle East. Travel agents in Iraq said that Turkey and Iran had begun canceling tickets to Minsk for Iraqi, Syrian and Yemeni passengers on Thursday, and that the government had stopped travel agents from selling even transit tickets to Belarus earlier in the week.

But that mattered little to desperate Iraqis, who were already finding alternate routes through Dubai, United Arab Emirates.

“I have heard that the situation is not good in Belarus, but I have to go because there is no life here, no job opportunities, no human rights, no equality and justice, no joy at all,” said Amer Karwan, a carpenter who went with three friends to a travel agency in Sulaimaniya on Thursday to pick up tickets they hoped would get them to Belarus.

Mr. Karwan, who turned 20 on Thursday, had borrowed $3,500 from a relative for the trip. He said the group was undeterred by the travel agent’s warning that the tickets through Iran and Turkey were nonrefundable and that there was no guarantee they would make it to Belarus.

Ironically, the biggest source of migrants, the semiautonomous Kurdistan region of Iraq, is considered the most stable and secure region of the country.

Unlike many of their parents who became refugees during Saddam Hussein’s era, this time the Iraqi Kurds are not fleeing war or genocide. They are seeking a future that even the country’s relative peace has not provided them.

Despite Iraqi Kurdistan’s outward prosperity, young people especially despair over the lack of jobs, and over the corruption, repression and tribal conflicts that often override the legal system.

They are taking out loans and borrowing from family members to make the trip.

The crisis has raised the price of visas to Belarus, which used to cost about $90 and now cost about $1,200. Most migrants said they were paying about $3,000 for packages including the visa, airfare and a few days’ accommodation.

Many migrants also leave thousands of dollars on deposit with currency transfer shops to send to smugglers who promise to get them to the border. Several said the smuggling fee was about $3,000. But often, the migrants said, the smugglers do nothing more than point out which direction to walk through the dense forest.

That is to say nothing of the emotional costs a migrant faces leaving home and family behind.

On Friday, Mr. Karwan, dressed in a new olive-green winter jacket and gloves, left home to take a taxi to the airport in Erbil, four hours away.

Seeing him off in Sulaimaniya, Mr. Karwan’s mother and two sisters stood at the gate sobbing. His father thrust Iraqi dinars into his hand and waited until the taxi door closed before wiping away tears.

“I feel terrible,” said his mother, Bayan Omar. “He is my only son. If I stop him from leaving, what would he do? He tells me, ‘Can you guarantee me a house, a car, a life, the chance to get married?’ I cannot stop him.”

Later that day, Mr. Karwan’s flights through Tehran and Istanbul were canceled. He was waiting in Erbil to be rebooked through Dubai.

For those who have already made it to Belarus, the situation is grim. At the border with Lithuania, several thousand migrants were pushed up against razor-wire fences, prevented from moving forward or going back.

Young men and families with small children who had walked for days through the deep forest were huddled around makeshift camps, burning wood to try to keep warm, according to videos sent by the migrants. Some had small pop-up tents, others buried themselves in sleeping bags on the freezing ground.

On Saturday, Polish authorities accused Belarusian soldiers of destroying part of a border fence near the village of Czeremcha and of trying to distract Polish frontier guards with laser beams and strobe lights, so as to help migrants cross into the European Union. The Polish account of events, however, could not be confirmed because the government in Warsaw has barred all nonresidents, including journalists and doctors, from entering the border area.

At least nine migrants have died in Poland over the past two weeks, most from exposure, according to Polish officials. Belarus has not said how many have died on its side of the frontier. Polish media reported on Thursday that a 14-year-old Iraqi boy had frozen to death near the border in Belarus.

“We have food and water but not enough,” said one Iraqi Kurd, who asked to be called by his nickname, Bahadino. He sent videos showing pregnant women and small children, some of them disabled.

He also sent a video of himself and a small group of migrants politely holding a cardboard sign reading, “Poland — Sorry.”

“Today we apologized to the European Union and to Poland,” he said. “You know because we came to the border and we broke the fence at the border. We apologize for that.”

But he had no apologies about trying to get into Europe. He said he had no plans to return to Iraq.