‘The guards at the Poland-Belarus border kicked us like footballs’ 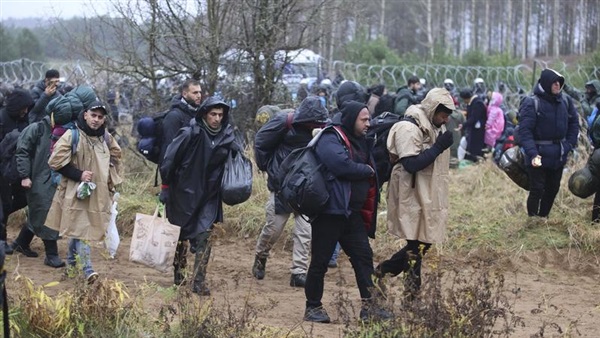 Afriend first told Dzhavad Asgari about what was happening in Belarus: “They don’t have any EU border controls there. You can easily enter.”

President Lukashenko, the Belarusian dictator, was encouraging migrants to make their way to his country’s border with Poland, and Asgari, 32, a lawyer living in the Afghan capital, Kabul, was desperate to leave.

As the Taliban swept through the country in a lightning advance over the summer, Asgari began plotting his journey.

Thousands of others from the Middle East, Asia and Africa were doing the same, fleeing blighted war zones to build a new life in Europe, unaware that they were about to become pawns in Lukashenko’s battle with Europe.

Asgari, a member of the Hazara minority, left Afghanistan with his son and pregnant wife. He had no choice, he said, because he had worked as a legal counsel for American organisations during the West’s occupation. “I was forced out of my homeland. I left my company, my house, my car, my career, all with a broken heart,” he said.

In May he flew to Minsk via Uzbekistan and Moscow, and was transported with his family to the Polish border crossing close to the town of Kuznica.

Everything was going according to plan until he was stopped by Polish guards and pushed back to the Belarus side of the crossing. His pregnant wife, who had begun bleeding, was allowed to remain but Asgari and his five-year-old son were turned away.

Like thousands of others he was forced to find a place in the makeshift, squalid camps that have sprung up on the border and wait for another chance to cross. “We were left to die in the forest,” Asgari said. “There is no humanity in that zone, it is hell on earth.”

They tried to cross into Poland seven more times, but in vain: “The guards were kicking people like footballs.”

Poland says it has recorded more than 33,000 attempts to enter the country this year, compared with 120 in all of last year. The onset of winter poses a new threat to the 4,000 people camped near the border fence, with reports of migrants dying from hypothermia. Asgari recalled the death of one man in the forest. “His friends buried him with their bare hands in the dirt.”

He and his son survived on protein bars given out by sympathetic border guards, drinking water from a swamp.

Making one last attempt they were finally allowed to enter, and were escorted to a migrant centre near Bialystok in northeastern Poland, where Asgari was reunited with his wife.

Another migrant at the centre, Yusef Atallah, 37, from Syria, said that he had bought a $4,000 “visa” to Europe from people-smugglers. Hunched over, and with bloodshot eyes, he described how he had been allowed to enter Belarus from Russia — before being assaulted near the Polish border by Belarusian soldiers.

“They told us to walk towards the border and that nothing would happen to us,” Atallah said. When the Polish guards refused to let him and others in the group cross, they returned to the Belarusian soldiers, asking to be allowed to go back to Minsk. Instead, the soldiers robbed and beat them, and left them to survive in the forest without water and food for five days.

“I was close to death because I lost so much blood,” he said. His broken jaw stopped him from eating and his cracked nose made him gasp for air. Eventually, two weeks ago, he managed to cross under the cover of darkness. He plans to remain in Poland, which has been “good to him”.

Asgari does not feel the same way. He is hoping to travel beyond Poland, to the UK, but his hosts have made it clear that that is not an option. “They said I had two options: returning to the forest, or staying in Poland,” he said. Growing desperate, he said he had even considered returning to Afghanistan, but its international airports have closed under the Taliban.

Asgari said he had good reason to want to reach Britain: he studied commercial law at Westminster University, and has relatives in the Ipswich area. “Lots of immigrants build their careers in that country” he said. “I am sure I could be a good asset as well.”

The arrival of the migrants in Poland has prompted a diplomatic crisis on Europe’s eastern borders, with claims that President Putin has encouraged Lukashenko to “weaponise” them as part of efforts to destabilise the EU.

Poland has sent 15,000 soldiers to bolster the 250-mile border and is planning to erect a £300 million wall next year. Germany has offered its support too, with regional leaders suggesting that fences must be erected to protect European territory. Britain has joined the border security effort, deploying a small team of troops yesterday on a “reconnaissance mission”.

There are fears that daily skirmishes between migrants and guards could become more violent, and that hostility between Polish and Belarusian forces facing each other across the fences could escalate into military conflict.

Brussels has begun imposing new sanctions on Belarus, which it accuses of waging “hybrid warfare”, and is asking third-party countries to suspend flights for migrants to Minsk.

Neighbouring Lithuania, which has faced similar pressure from migrants massing on its border, declared a state of emergency this week. The EU has sought to use diplomatic channels to close off the migrant routes into Belarus.

In response Lukashenko has threatened to “freeze Europe” by cutting off gas supplies that are piped through Belarus.

Turkey banned Syrian, Yemeni and Iraqi citizens from boarding flights to Minsk yesterday, and Iraq has pledged to evacuate its citizens stranded in Belarus. Charities have warned that a lack of access to the affected areas has created a humanitarian crisis. They say European states have an obligation to allow them to provide food and shelter, but Poland has imposed a a two-mile exclusion zone around the border.

“Access for independent observers and the media is essential,” Iwo Los, from Grupa Granica, a Polish organisation, said. “These people have to receive humanitarian aid and medical aid.”

Asgari had a simple message for the thousands of migrants who may still be hoping to “easily enter” the EU through Belarus. “Iraq, Syria, wherever you are I can assure you it’s safer than that forest,” he said.

President Lukashenko has made no secret of his intention to weaponise migration in retaliation for EU sanctions against his regime (Marc Bennetts writes).

In May the Belarusian leader, who has been in power since 1994, warned that the country would no longer enforce border controls with the EU. “We stopped drugs and migrants. Now you will eat them and catch them yourselves,” Lukashenko said.

Most migrants arrange their journeys through travel agencies across the Middle East, which work with Belarusian companies to provide package tours that include visas, flights and accommodation in Minsk.

The migrants usually stay in a hotel before going to the Polish border in cars or buses believed to be organised by the Belarusian regime.

After Lukashenko’s threat to flood Europe with migrants, there was a sharp increase in the number of flights from Iraq to Belarus. Among the Belarusian tourist agencies believed to be organising flights is Tsentrkurort, which has links to the Lukashenko administration. Migrants also arrive from Afghanistan, Somalia and Syria among other countries.

Lukashenko may have been hoping the EU would become so desperate that it would offer his cash-strapped regime huge sums to stop the flow of migrants. If so, his plan backfired: the EU is now likely to impose more sanctions.