Water wars in the cradle of civilisation: the next Syrian tragedy 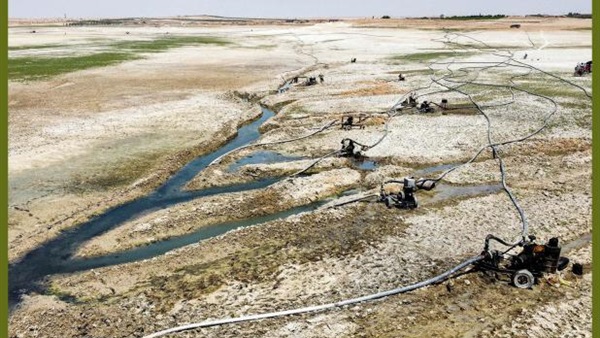 The river in front of us was so swollen with floodwaters just a few years ago that it was an impenetrable front line in the war between Islamic State and their Kurdish and Christian enemies.

Now it has disappeared. The floor of the Khabur river valley is brown and dusty in the autumn sun. The local residents who fled during the war have not returned to farm the land, and the desert is spreading in the face of a devastating drought across Syria.

There are many causes to this new disaster, on top of so many in this blighted country. A report published this week by Pax, a Dutch peace organisation, backs claims by the remaining locals that the Khabur dried up after its flow was dammed by Turkish-backed forces that invaded northern Syria two years ago.

“This is a crime against humanity, and no one is trying to stop them,” Aram Hanna, a spokesman for the western-backed Syrian Democratic Forces (SDF), said as we looked across the valley. The SDF is the Kurdish-led army that Turkey wants to displace. Hanna is from one of the predominantly Christian villages that line this part of the Khabur.

However, the local conflict is only one of the causes of the water crisis. The fate of the Khabur, a tributary of the Euphrates, is being mirrored across Iraq and Syria, in the land once known as Mesopotamia, the cradle of civilisation.

The once-fertile plains of the Euphrates, the Tigris and their tributaries have been decimated by a mixture of war, climate change and poor environmental policies.

Farmers are leaving the land as yields collapse. The lives of those who remain have entered a vicious circle, as they use diesel pumps to find groundwater ever deeper under the earth, denuding the reservoirs and polluting the land and air with fumes and residues.

“We failed to grow any wheat this year,” said Jassem Mohammed, a farmer from Deir Ezzor, to the south. “That is a catastrophe. No wheat, no bread.”

He said he had been able to irrigate his farm, two miles from the Euphrates, just once so far this year and was now dependent on pumping groundwater, but the quality was too poor for his crops. “It’s getting worse every day. If you come here you will see children sleeping near the bakeries so that they can queue early in the morning, since bread has been so scarce.”

A report by a coalition of aid agencies in August said that five million people in Syria and seven million in Iraq were “losing access” to water. In both countries, wheat production, the core of agriculture for populations whose staple is bread, is collapsing.

The agencies warned that the flight of farmers from the land would ultimately lead to a new refugee crisis, as residents sought opportunities elsewhere, becoming living examples of migration resulting from climate change.

“With hundreds of thousands of Iraqis still displaced and many more still fleeing for their lives in Syria, the unfolding water crisis will soon become an unprecedented catastrophe pushing more into displacement,” said Carsten Hansen, regional director for the Norwegian Refugee Council.

Conditions have certainly been extreme, with temperatures in Mesopotamia regularly hitting 50C for days on end in the past few summers. There have been huge variations in rainfall, which slumped from 430mm in northeast Syria in 2019 to 217mm in 2020. This year has also been dry.

The wars in Syria and Iraq have not helped, with vital infrastructure such as pumping stations damaged. The Turkish-backed forces in northern Syria are accused of disrupting operations at the Allouk pumping station that supplies most of Hasakah province with drinking water. Turkey itself stands accused of reducing the flow of both the Tigris and Euphrates through dams built in its territory.

The excessive use of groundwater by Syria’s farmers goes back decades, to when President Assad’s father, Hafez, attempted to boost agricultural production by encouraging mass irrigation through water pumps using subsidised fuel. The water table has fallen by as much as 100 metres in places.

Mercy Corps, another aid group, said that the shortage of clean drinking water had led to tens of thousands of cases of acute diarrhoea this summer. It also recorded seven deaths from drowning among people who fell into irrigation channels while trying to find water.

“So many water pumps are out of service there is no reliable source of water,” said a Mercy Corps project manager who refused to give his name for security reasons. Nearly half a million people in the region have lost regular access to clean water.

Worse is expected: there are fears that Tabqa and Tishrin, the two dams whose hydroelectric plants provide nearly all of eastern Syria’s electricity, will be forced out of service, causing a wider collapse in infrastructure.

There is little sign of the over-arching political solution that might implement policies to ease the crisis. The SDF has installed a series of local councils which have successfully begun to rebuild devastated cities like Raqqa, but northeastern Syria as a whole has no internationally recognised government. Its controlling political faction, the PYD, is a Kurdish offshoot of the PKK, the Turkey-based guerrilla group proscribed in the West as a terrorist organisation.

The United States and Britain both co-operate militarily with the SDF. But neither they nor anyone else has much idea of what political shape the region will eventually take; whether it will be reintegrated with what remains of the parts of Syria still held by the Assad regime, or remain a separate entity, like the Kurdish regional government in Iraq.

Few companies or governments are prepared to invest for the long term on such a shaky basis.

Pax has called on the international community to find “cross-boundary” solutions. But with Turkey, the Syrian regime, Russia, the US, Iran and a whole variety of local militias facing off against each other within the country — let alone across borders — those solutions seem as far off as ever.