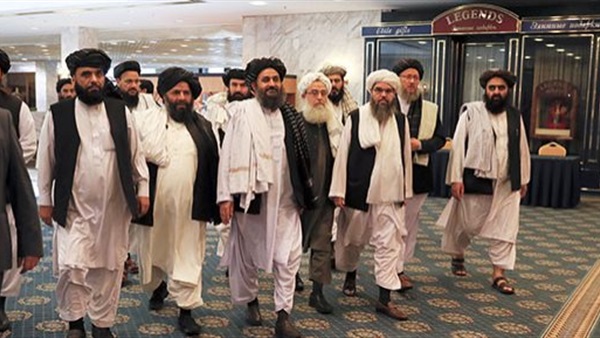 The Taliban is trying to beg the International Monetary Fund and the international community with the aim of supporting Kabul with aid after it was prevented from using the reserve assets of the IMF scheduled to be allocated to the 190 member states, which deprived the country of nearly $500 million.

The head of the Taliban government, Mullah Mohammad Hassan Akhund, called on the International Monetary Fund to release the frozen funds and solve banking obstacles in the country.

Most of the roughly $10 billion in assets of the Afghan central bank are outside Afghanistan, which puts them out of the Taliban's reach, with a Biden administration official saying that any Da Afghanistan Bank assets held in the United States would not be available to the Taliban.

The Taliban called on the international community to continue providing aid, stating that Islamist militants are not terrorists.

Matiullah Rouhani, a spokesman for the Afghan movement in Kunduz province, said that the aid may take the form of investment, reconstruction projects, or any kind of humanitarian aid to the government or the citizens of Afghanistan, criticizing the international community for supporting what he described as a “corrupt government” in Afghanistan for the past 20 years but stopped this aid when the Taliban took power.

For his part, Akhund said during his meeting with businessmen, bankers, religious scholars and tribal sheikhs in Kandahar that his government is making an international effort to release frozen funds and solve banking obstacles in the country.

Fears of economic and social collapse

On the other hand, EU High Representative for Foreign Affairs Josep Borrell said that there is an urgent need to prevent an economic and social collapse in Afghanistan, noting that this will be possible by the Taliban allowing the international community to help the people.Henoted that he discussed how to evaluate the actions of the movement during his recent visit to Doha, stressing that Qatar is an influential player when it comes to Afghanistan.

In mid-September, the United Nations was able to collect donations estimated at more than $1 billion at a donors' conference to support Afghanistan.

UN Secretary-General Antonio Guterres told the ministers participating in the conference that it is very important for the international organization to communicate with the Taliban to facilitate the transfer and distribution of humanitarian aid to the country, noting that Afghans are in dire need of food, medicine, health services, drinking water and sanitation. Even before the Taliban seized power, they were facing one of the world's worst humanitarian crises.

At a time when the Afghan movement took control of the reins of power in mid-August, an official in the US administration confirmed that the United States had frozen nearly $9.5 billion of assets owned by the Da Afghanistan Bank (DAB) and stopped cash shipments, stressing that any assets of the central bank owned by the Afghan government in the United States will not be available to the Taliban, which is still on the Treasury's sanctions list, in an attempt to prevent a Taliban-led government from accessing the funds.

At the time, Republican members of the US House of Representatives sent a letter to Treasury Secretary Janet Yellen, asking her to intervene in the International Monetary Fund to prevent the Taliban-led Afghanistan from using nearly $500 million in reserves or providing more money. Details about the actions being taken at the IMF to ensure that assets known as Special Drawing Rights are not used in ways contrary to the national interest of the United States.

In mid-August, the IMF said that the new government headed by the Taliban had been prevented from using the fund's reserve assets to be allocated to its 190 member states, depriving the Taliban of about $500 million.

After the fall of the government of former Afghan President Ashraf Ghani, DAB Governor Ajmal Ahmadi indicated during an interview with Bloomberg Network's Odd Lots podcast that Afghanistan is on the cusp of an economic crisis and that given the freezing of the vast majority of the central bank’s assets of more than $9 billion dollars by the United States, the country is facing a potential economic crisis, as this comes on top of the Covid-19 virus, the regional drought, and the displaced who have already caused difficulties.

With regard to the IMF’s assistance to Afghanistan, the Fund was scheduled to provide a final payment of $105.6 million in aid to Afghanistan as part of a program agreed upon in November 2020, but the IMF suspended its aid to the country after the Taliban took control due to the uncertainty of the political scene.

Afghanistan's economy and banking sector are struggling, with nearly three-quarters of the country's 40 million people living in rural areas, while the majority of lenders are located in the three largest cities, according to World Bank data, where Afghans rely on the US dollar to transact in the informal transfer system known as hawala, since Afghani currency is not accepted for cross-border trade.